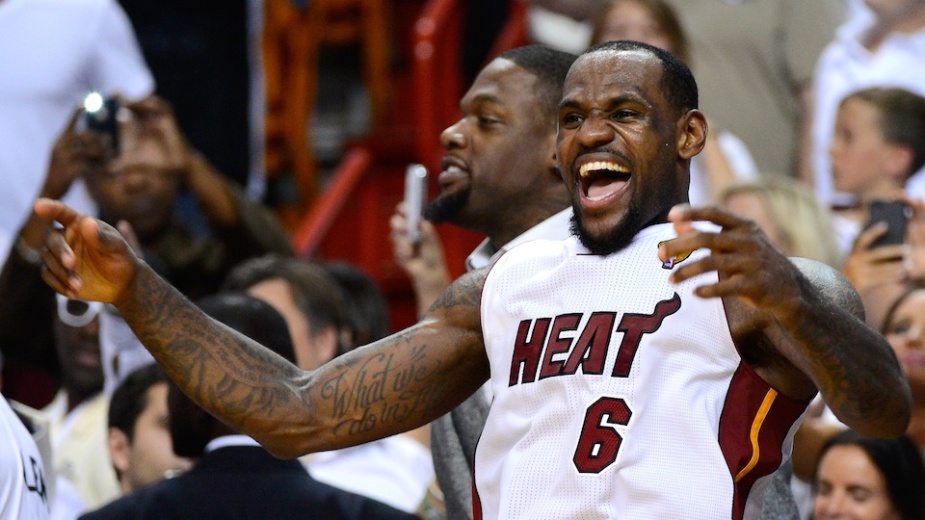 Halfway through the third quarter of last night’s epic Heat/Spurs’ game and with LeBron James rocking a stat of line of 3 shots made out of 12, I tweeted the following tweet to Frankie….

@fzamudio this game has "massive 4th quarter by Lebron" written all over it. And I hate myself for writing that.

What happened after that?

LeBron finished 11 of 26 and the Heat went on to beat the Spurs in Overtime.

So am I psychic or at the very least, qualified to become a talking head on ESPN?

No, I’m not psychic and honestly, the squirrels running around our backyard are as qualified to be talking heads on ESPN as I am. I don’t think it requires very much to be an on-air personality on the worldwide leader (see: Bayless, Skip.)

This is more about inevitably. Specifically sports inevitably, which is currently embodied by LeBron.

Examples…
A.) The early 2000’s Yankees beating the Red Sox
B.) The pre-2004 Boston Red Sox losing (frequently in heart breaking fashion)
C.) Tiger Woods dominating the conversation at the Masters on Sunday afternoon (before the scandal)
D.) The 2007 New York Giants’ defensive line dominating a game
E.) The early 2000’s Patriots pulling out a miraculous win
F.) Kobe Bryant going beast mode and winning games single handily
G.) Tim Tebow pulling a ridiculous comeback out of his arse for the Broncos during the 2011 season

When I lived in Philly from 2006 to 2012, I became a Phillies’ fan because I liked baseball, wanted to watch baseball on a regular basis and wanted to subsequently care about the team I’d be watching on a regular basis. Lucky for me, this coincided with the Phillies going on a remarkable run (culminating in winning the World Series in 2008) and becoming a massively entertaining team that was fun to watch and easy to rout for. Phillies’ game were a hell of a good time and one reason for that was the overwhelming feeling that if the team happened to be losing late in games, they still had a chance. Games just weren’t over until they were over. They had grit and spunk; a fire that could not be put out.

Quite simply, the Phillies from 2006 to 2009 always having a chance to win was a sports inevitably.

That’s where we stand with LeBron James now. His greatness and his ability to take over games has become an inevitably. I wasn’t going out on a limb last night when I tweeted that LeBron would have a massive fourth quarter. I was just acknowledging an inevitably; acknowledging something that we all kinda knew. It’s why game seven of the Heat/Pacers’ series was so anti-climactic. We knew the Heat were going to win. We knew LeBron was going to win. Things had been cute, but things were about to get real.

This specter of LeBron’s Sports Inevitably has hung uncomfortably over this entire NBA season; looming over it ominously like dark storm clouds on a otherwise beautiful summer day. The whole season has seemed like a race for second place as we all felt the tug of acceptance that the Heat would end up winning the championship when the 2012-2013 season was over. We all kind of felt this way last year too. It was challenged briefly in the Eastern Conference Finals when the Boston Celtics pushed the Heat to the brink and LeBron was starting to look like he was going to be more Wilt than Russell; a supremely talented player who would be known more for his personal accomplishments than team accomplishments. But then game six happened and we were all left to kick ourselves for questioning the inevitable; for thinking LeBron and the Heat weren’t going to advance past the Celtics and win the championship.

This season hasn’t featured a moment quite as staunch and memorable as that Celtics’ series. The Bulls and Pacers made things interesting, but eventually fell in line. Likewise the Spurs have made these Finals equally interesting and super entertaining, but last night, the ship was righted and inevitably prevailed.

I see Game 7 unfolding tomorrow night in a similar fashion, with the Spurs putting up a valiant effort, but LeBron ultimately taking over.

There’s no point in fighting it.

Fighting it would be like fighting gravity or parking tickets in Philadelphia. Completely foolish.

Listen, I hate the Heat as much as the next guy. But I’m also a realist. I know what I’m seeing when I watch LeBron- I’m seeing the greatest player in the world. Gone are the days of LeBron shrinking in big moments and not having enough to cross the finish line. We are currently living in LeBron’s Dominant Days. Nike was right. We are witnessing greatness. We don’t have to be happy about it and there’s no point finding chinks in the armor. It’s inevitable.

Let’s embrace it and move on; focus our efforts on things we can control. We can’t control what’s going to happen tomorrow night, we can only enjoy it taking place.

But with that being said…