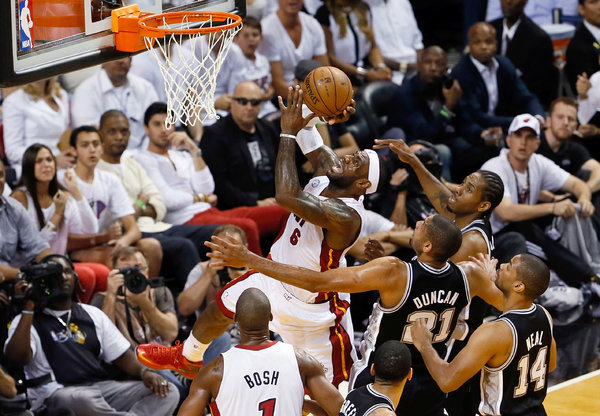 Against our better judgement, Lucy, our new dog, and I stayed up for the entire Spurs/Heat game. We sat side by side until almost midnight, watching one of the better basketball games either of us had seen in a while.

Although to be fair, Lucy spent more time like this… 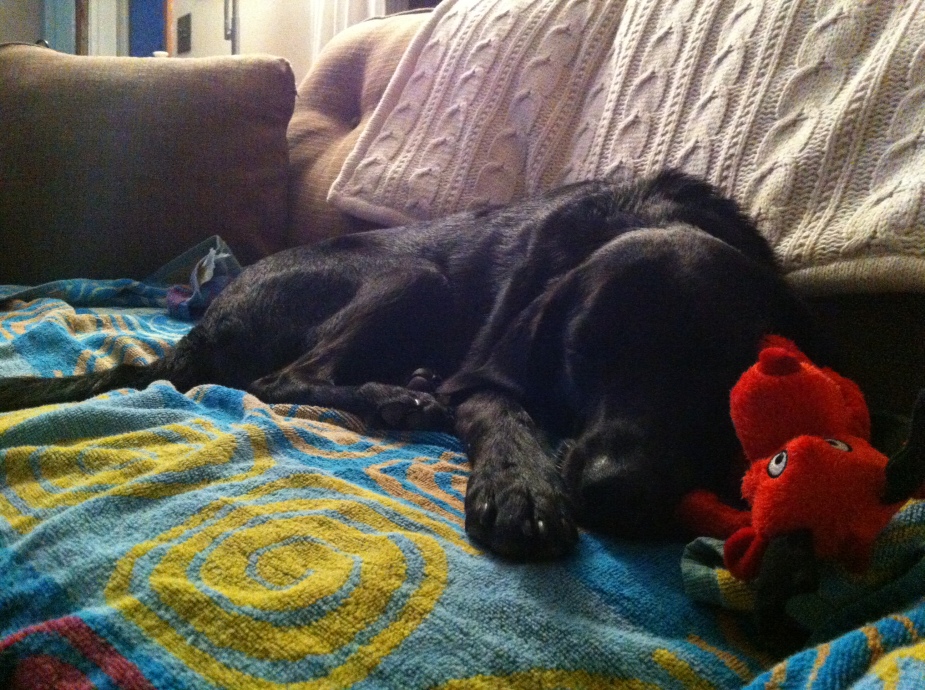 …than she did actually watching the game.

But oddly enough, she has a few thoughts on what went down last night in Miami. She must have taken in the game via osmosis, which further proves what Kim and I had already concluded- she is an amazing dog.

It’s to bury the hatchet planet Earth. LeBron James is a fantastic basketball player. He’s the best player on the planet and essentially won last night’s game by himself. Timely three pointers by some of his teammates definitely helped, but in the end, it was all LeBron. 37 points, 12 rebounds and 4 assists. That young man might have a future in the game of basketball. Or football. Or rugby.

The Decision was terrible. It was an abomination. It made ESPN look bad and made us wonder who the hell actually told LeBron doing the whole thing was a good idea and further more, why the hell did he listen.

But that’s in the past. It’ll always be attached to LeBron’s resume, but that resume improved dramatically last night. So much so that it finally put the Decision in the rear view mirror or more specifically, on the bottom of the page as a footnote as opposed to part of the opening statement. No one should be defined by something stupid they did in their twenties, it’s just not fair. If we were all hamstrung by something like that, there’d be no one left to run for president or argue about the President on television.

The past is the past and LeBron is a beast. The next few years already belong to him, so we might as well embrace it.

A guy is walking down the street. A group of dudes decide to jump him; kick the crap out of him like Will Hunting and his buddies did to that dude on the basketball court. These dudes really put a licking on this poor guy and when they finish up, he’s lying in a heap on the ground, barely moving. As this group of dudes go to leave, one of their buddies runs up, kicks the guy viciously in the head and then proceeds to hoot and holler, yelling to no one in particular how they kicked this guy’s ass and how they’re so tough.

That last dude is Chris Bosh.

Lucy and I have no love for Bosh.

I hope you enjoy South Beach while you can. You’re totally getting traded this summer.

We can only hope Danny Green took a picture of the top of the mountain top earlier this week when he was sitting pretty up there.

Tony Parker did not have a good game last night. 10 points, four assists, 2 turnovers, 19 exclamations of “what are you doing?” from Lucy and I over the course of the game. That poor little Frenchman looked like he had gotten hit by a bus. He looked terrible. And unfortunately he played terrible. Like, very terrible. Like so terrible that Manu the Rogue Warrior Ginobli was a better option. The Spurs needed a big game from Parker to have a chance to win and they got the exact opposite.

Related: this morning, Mike & Mike, were questioning Spurs’ coach Gregg Popovich sitting Parker during the last minute of the game, when the Spurs’ last few chances to win were slipping away. This is asinine and further proof why ESPN is making us dumber as a nation. Parker played like horse shit last night. He had done nothing to show Pop, the Spurs or anyone else that he’d be able to contribute down the stretch. Bitching about Pop’s decision is complaining for the sake of complaining. It’s nitpicking.

Lucy and I also have no love for nitpicking.

We find it petty.

Lucy Thought Number 5: The Future is…

For the Spurs, it’s this guy…

Kawhi Leonard had 19 points and 16 rebounds last night and for the most part, did a hell of a good job defending LeBron. Lucy got so excited, she told me her dragon was now named Kawhi. I for one, didn’t really think a pink stuffed dragon would be named Kawhi. But she was unwavering.

I couldn’t see that dragon being named anything but Kawhi.

It didn’t take much, but I got Lucy on my side when it comes to Dwanye Wade. When I first told her that I hate him and think he’s a terrible human being, she thought that was harsh. Kim did as well. But then I told Lucy about how he’s a dirty player and how he wears women’s clothes and how he complains to the refs too much. She thought about it for a second or two and then she agreed.

He is no Kawhi Leonard, she said.