When this week started, I figured I’d be spending the bulk of my time listening to the new Arcade Fire album.

And I was wrong for two reasons.

The first is that the new Arcade Fire album is just okay and fails to hold my attention. I forget that it’s on. I’m not disappointed though, because for some reason, I think it’ll either grow on me eventually or my relationship with Arcade Fire will start and end with The Surburbs, something I’m totally cool with.

The second reason I was wrong was my discovery of J Roddy Walston and the Business. Their new album, Essential Tremors, has taken over my week and has been the only thing I’ve been listening to besides anything I can find on ESPN Radio that even remotely involves the Red Sox- the 2013 World Series Champion Boston Red Sox.

But I don’t know anything about this band, J Roddy Walston and the Business. All I know is that they sound like a dust-up, after hours rendezvous and meeting of the minds involving the Black Keys, old Kings of Leon, Jack Daniels, Creedence Clearwater Revival and Band of Horses. 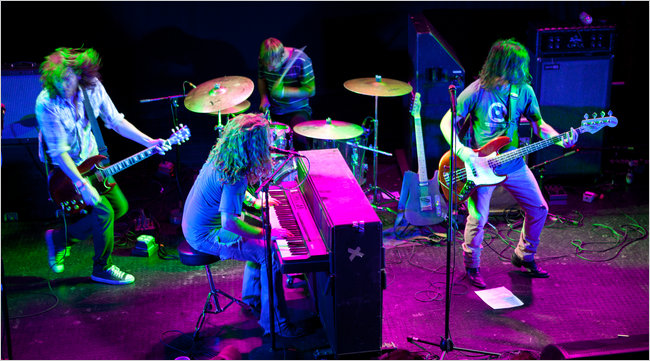 So I did some digging.

Here are some things I learned:

The first thing I learned…

Essential Tremors is the band’s third album and the title of the album comes from a disease front man Walston suffers from.

The second thing I learned…

The band is originally from Tennessee, but relocated to Baltimore in 2004.

The third thing I learned…

The band tours in an old church van. They bought the van for four grand and never bothered to remove the lettering on the outside of the van.

The fourth thing I learned…

The band once tried to play 60 pianos that were placed around New York City in one day. The pianos were placed as part of an art installation by artist Luke Jerram. They didn’t make it. They fell short by two pianos. NYC traffic ain’t go no love for art.

The last thing I learned…

Essential Tremors is a flat out barn-storming rush of an album. Banging pianos, stomping beats and flying high choruses populate nearly every song. Highlights are “Heavy Bells,” “Marigold,” “Black Light,” and “Boys Can Never Tell.” I haven’t listened to either one of their earlier albums, but I would bet cash money the sound is similar and they’re just as good. Essential Tremors is most likely their “slightly more polished/stepping it up” album, so for all intents and purposes, it’s a good place to start.

Give Essential Tremors a listen…