Home › Mad Men recap › They’re All Gonna Laugh at You

They’re All Gonna Laugh at You 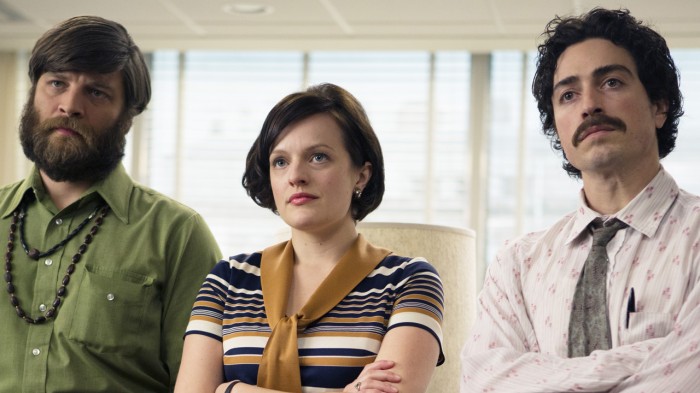 Whether or not it’s rooted in nostalgia or just flat out appreciation, I’m really enjoying this season of Mad Men so far. Maybe it’s because the end is near…well kind of, not really…a year is a long ways away. Regardless, I think the four episodes we’ve seen so far have been great, this week’s episode, “The Monolith,” was no exception.

Who would have thought Freddy Rumson would come back in such a meaningful way?

Up until this season Freddy was really known for two things. The first thing and the thing that kind of sticks with you the most was Freddy pissing himself in the middle of a meeting, which was what led to his ultimate dismal from Sterling Cooper, him eventually getting sober and then having a second act as a freelancer. The second thing, and I’m not a 100% about this, but definitely at least 80% sure, was that he acted as a go between when it came to Peggy leaving Sterling Cooper for a new gig.

But season seven has seen a rebirth from Freddy, starting with the very first scene of the season.


Since then, he’s kind of faded back into Mad Men obscurity, but then, just like that, he was back in action, serving as Don’s last good friend. And yes, his last friend because apparently EVERYONE ELSE EFFIN’ HATES DON. Why? Standby. Don got pissed, Don got dissed, Don got wasted and Don wanted skip out of work and go see…the Mets. Yeah, the Mets. Why the Mets? Because of dearly departed Lane’s Mets’ pennant that was left behind in his old office. Nothing says haunted like going to a Mets’ game.

But Freddy’s latest appearance wasn’t so important because Don needed a designated driver. His appearance mattered because he was able to get through to Don, something that few people, especially people without boobs, are able to do. Freddy dropped some pep talkin’ truth bombs on Don when ol’ Don needed it the most, especially if Don is serious about getting his ish together, which I’m pretty confident he is. And it worked. Some super strong coffee and a clean suit and Don was ready to toe the line- all thanks to Freddy. It may have very well been the last we see of Freddy, but at least he went out with a bang. And hey, did you know he’s one of Bill Murray’s brothers? It’s true.

Yeah, so why is everyone pissed at Don?

I wish they’d give us a little refresher on this because I’m not totally sure. I get why the partners are. He eff’d with their money. And I guess Peggy’s pissed because she blames Don for cutting Ted’s balls off and forcing him to run off to California where he apparently just waits for conference calls to happen. I guess I just don’t get why everyone is so salty.

Speaking of salty, what’s up with Ginsberg?

You know, he has been kind of a knob job this season and with very little explanation why. It can’t just be a couch full of farts, although that is terrible. Last season they dipped a little bit into Ginsberg back story and it was really interesting. I wish they’d do that some this season.

And that brings something else up that I’ve noticed about this season far- this season has been much more Don-focused than past seasons. Obviously he’s the main character, but in past seasons, other characters have been featured more than they have been this season and there was even times in the recent seasons when we wondered if maybe Peggy, and not Don, was the main character. There’s no way you’d say that now. Maybe it’s because Mad Men is ultimately Don’s story and with the show nearing the finish line, more emphasis is being put on him? Yeah, maybe. Either way, I miss learning more about the other Mad Men characters like Joan, Pete, Dawn and Stan. Especially Stan. #morestan #instanwetrust #stanismyspiritanimal

Pete’s kind of stuck in the bullpen this season, huh?

He has and it’s a damn shame. He also appears to be straddling the line between becoming just another role player and making something of himself in California. I just don’t know if we’ll see it.

Of all the characters on Mad Men, which one would be best suited to have their own spin off?

1. Pete Campbell. A city boy from New York living it up in sunny California in the 1970’s is an interesting enough premise. Make it about Pete and you have a winner, especially if it’s called For Pete’s Sake.

2. Stan Rizzo. This needs no explanation. But let’s say it did. Have you ever wondered what Stan’s life is like outside the office? I have. Is there any doubt Stan goes to Woodstock? What would the 70’s be like for Stan? I can’t see him getting into disco. He looks like a Zeppelin man. On his show, Stan opens his own coffee shop in Brooklyn, has a series of hilarious adventures with the ladies, finds out he has a son, that son ends up moving in with him and hilarity ensues.

4. Joan Harris. Joan becomes the first female advertising executive in New York City. It’s not a comedy, more of a drama, but a real saucy, sassy drama.  And here’s a twist, each episode is a day in Joan’s life, like 24, but with less terrorists and damn it’s.

What should I make of some of this see, Don is going to die talk?

I saw one headline, “All the Signs Don Draper will die on Mad Men,” but you know, I didn’t read it. I didn’t because A) I don’t want to think about the end of Mad Men for a change. I just want to enjoy it as it happens and B) I’m starting to think he won’t die. As far as the opening credits go and is that Don or not, I think it is, but I don’t think it’s any kind of indication that it will be how the show and Don’s life ends. I read that differently. I read it as the floor is always on the verge of dropping out on him and his life is about finding some stability, some stability that will somehow make him happy. He is a falling man, but not literally.

Bert was kind of Dick to Don.

That’s not a question, but it still was interesting. Bert kind of went all Tywin Lannister on Don. Why? Well for some reason EVERYONE IS PISSED AT DON. And also because the higher ups at Sterling Cooper aren’t interested in Don “saving” them anymore. As Bert said, they were fine without him.

Is Roger Sterling the best ever?

Roger’s daughter goes by Marigold now. What does that make you think of?

This wonderful song by one of my favorite new bands, J Roddy Walston and the Business…