Mad Men Recap: What Do We Want? 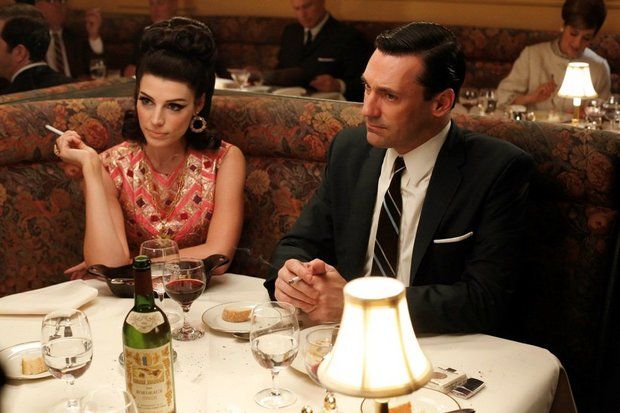 What are we routing for in Mad Men?

At the end of last night’s episode, “To Have and To Hold,” Sylvia tells Don that she prays for him. She prays for him to find peace. This stuck with me once the episode was over. I was left wondering if Sylvia was supposed to be speaking for the audience when she said that. But if that were the case, is that what we want for Don? Peace. Is that what Mad Men is ultimately all about- Don finding peace?

I’m not sure if I want Don to find peace because I’m not sure he’s earned it. I’m not sure I really want him to even be happy. If he were more of a good guy (see Taylor, Coach) then you could talk yourself into wanting him to find peace. But Don Draper is not a good guy. Tony Soprano was not a good guy and as a result, left us conflicted in regards to what we wanted for him. It’s the same with Don. Don is a terrible husband, a shotty part-time Dad, a self-serving preservationist who stole some dude’s identity in an opportunistic act of cowardice. Don Draper is a man who is better at running away from his problems, rather than face them. He is not sympathetic. He is not something to strive for. He is not a hero anymore than he’s a villain. He is simultaneously hard to root for and hard to root against. He’s complicated in the best and worst ways possible. His inability to find happiness or even the peace Sylvia is praying for him to find has left a trail of dead behind him.

Should we really be in his corner?

This keeps leaving me to wonder…what do we want from Mad Men?

The show is closer to the end than the start. There is only one season left. It’s okay to start thinking about how the show is going to end; to start thinking about how we want it to end. I still don’t know how I want The Sopranos to end and that happened a few years ago. I’m at a loss for Mad Men. There have been rumors that the show would end in present day. I’ll pass on that. Part of the allure of Mad Men is that it exists in a time capsule. Ending it sometime in or around modern day would ruin that.

What do we want from Mad Men? What are we praying for?

Look at the ketchup pitch in this week’s episode. It was refreshing to see Don back in his old form, delivering a good pitch. It made you want SCDP to land the account. Like the good old days. But then in came Peggy- not only delivering a good pitch of her own, but dropping a classic Draper line: if you don’t like what they’re saying, change the conversation. I don’t know about you, but I very quickly found myself rooting for Peggy.

Is that who should be rooting for in Mad Men– Peggy, not Don? Is Mad Men a show about Don’s growth or is it subtly about Peggy’s? I’d much rather Peggy find peace than Don find peace. She’s by far the more likeable character; someone much easier to root for. In fact I’d rather Roger Sterling, Joan, Ginsburg, Kenny Cosgrove or even Stan the Man Rizzo find peace than Don. That would be one hell of a rope-a-dope, though. Everything up until this point has been about Don. It would be pretty jarring if when the show concluded, the main resolution wasn’t about Don, but was about someone else. In Boardwalk Empire, I th0ught a similar situation was unfolding in season two- when Jimmy was on the rise, looking to overtake Nucky. I wondered if Boardwalk Empire was going to be comea show about Jimmy, not Nucky. But that was answered when Jimmy was killed. I can’t see Don killing Peggy. So cross that out.

So I keep coming back to this- do I want Don to find happiness; to find the peace that Sylvia is praying for? When Mad Men ends, do I want to see Don sitting back, content and with a smile on his face- finally happy with how his life has unfolded?

I’m not sure I will anytime soon.

If I’m sure of anything, it’s that hanging out with Stan would be pretty fun.