Home › Music › We are the Escapists

We are the Escapists

EDM. Electronic dance music. Sweepin’ the nation. And I get it now.

I’m not about to start listening to EDM and I’m not about to start frequenting EDM shows. For starters, I don’t own nearly enough bright yellow tank tops and barely any headbands. But hey, it’s cool. I get it. It’s escapism. Let’s be honest, last week was a pretty wild week here in sunny ol’ America. Bombings in Boston. Exploding fertilizer plants. The whole background checks thing. Last Friday night in the foreboding looking spaceship that is the Rutgers Athletic Center, with Alesso on the ones and twos and a potential thunderstorm lurking more ominously than cops in the mens’ room, absolutely none of that seemed to exist. There was no bad in the world. There was no good in the world. There was just a thumping, pulsating beat, wildly erratic, yet methodically choreographed lights and more day glo tank tops than the world really needs.

I got it back in the day when I was all about Phish shows. I spent the Millennium on an Indian reservation in Florida, listening to a seven hour set by Phish while the outside world feared the worst in the form of Y2K. When Phish’s set ended and we made our way back to our campsite, we all wondered aloud- had the world ended? We had no idea. Then we wanted to know if anyone was making grilled cheese’s. Because priorities in life are important.

Music exists to serve the same purpose secret hallways and long, winding escape routes do- to escape. To get the hell out of Dodge. There isn’t any difference between a marathon Phish set and an hour long DJ set in that respect. It’s all about the now, the NOW, the area directly in front of you, the area in your dancing zone, the area in your line of sight that is bombarded with flashing lights and waving hands. 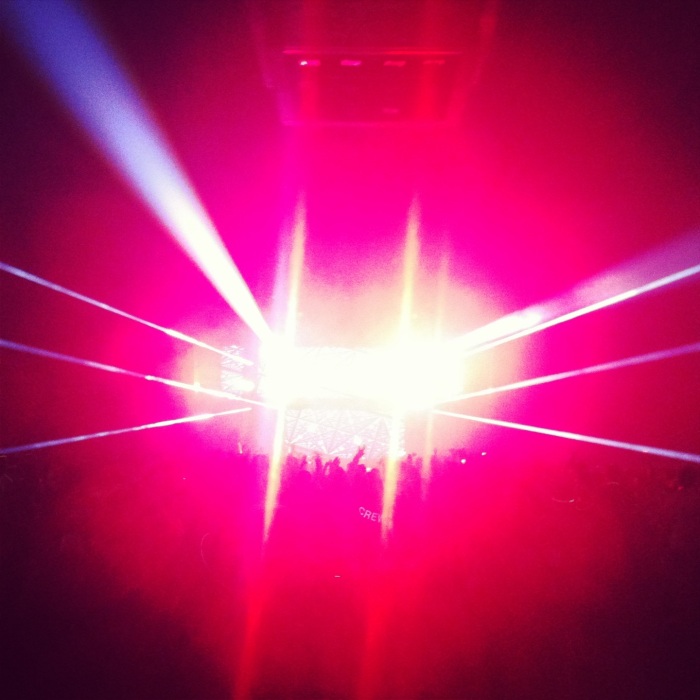 I get the beat.

I get the giant screen savers. What else are you going to look at?

I get the repetition. Find the art rockers if you want chord changes and tempo changes every four measures. Those bands are probably playing in a dimly lit sinkhole somewhere. More power to them. It takes all kinds. The world needs music in our sinkholes.

Alesso, a Swedish DJ akin to Swedish House Mafia and Tiesto, played for about an hour. The music dipped out for brief moments but essentially it was non stop. Much like when football is on and you can’t help but stop what you are doing and watch, the beat was so infectious you couldn’t help but bob your head at the very least. There were moments in his set when you couldn’t even see if Alesso was on stage or not. He was hidden behind the elaborate light show and smoke, which drifted up from below the stage. When you could see him, he looked like many of the jumping bean youngsters in attendance. He was enjoying his music as much as anyone. And again, it was hard not too. Alesso doesn’t necessarily play songs, so nothing is really catchy. Mumford and Sons are catchy. Alesso is infectious.

But I am not an EDM fan.

Maybe I’m too much of a Dave Grohl mouthpiece, but I like the human element of music. I like the sounds of smashing cymbals and the sight of flying limbs hitting those cymbals. I like to see spit flying over microphones and the visual thumping of amps turned up to eleven. I like it real and I like it loud and I like it chalk full of life. EDM is great, but it’s produced by machines. If the machines eventually do take over the world, EDM is one thing they won’t have to worry about. They have a handle on that already.

To each their own, though. Music is about the end result. It’s a feelings-orientated business. The path taken isn’t as important as the destination. No one cares how you got to work, only that you did. No one should care how you enjoy your music, only that you do. Getting distracted by the how diminishes the returns. Enjoy the ride, sir.

Will I go to another EDM show? No.

Will I scrounge the Internet for EDM jams? No.

But will will I understand when someone says they are and they do?

I’m not sure I understand the clothes, but like I said, to each their own.

Like Loading...
‹ The Clip From Young Guns That’s Symbolizes the Celtics’ Playoff Hopes
Mad Men Recap: What Do We Want? ›