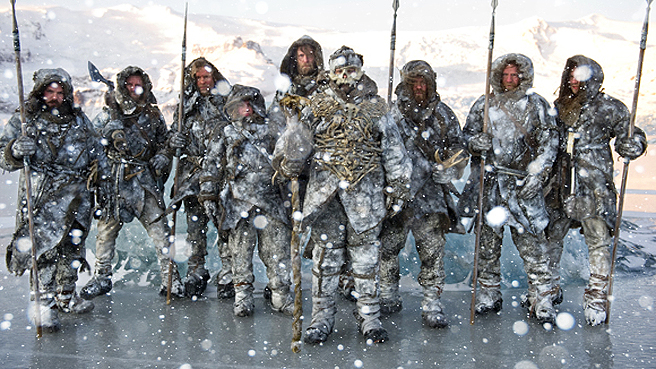 Let’s face it. This week’s Power Rankings start at number three because there’s no way anyone is beating television’s first ever Drop the Whip moment or a long overdue rebellion and the killing of one of the grossest, most disgusting white dudes on television not named Donald Trump.

And then this happened…

Which led to this happening…

And then finally this happened…

And the lesson learned from all of this?

2. The Night’s Watch Adventures Beyond the Wall

Straight up- things took a turn with the Night’s Watch this week. Apparently endless marching in sub zero temperatures and meals consisting of bread covered in saw dust will make a dude a little cranky. It’ll also make a dude a terrible house guest.

All hell broke loose at Caster’s crib up north leading to Caster getting killed, Commander Mormont earning the First Person I Cared About Who Died This Season Award and Sam hitting the road with Gilly and her baby in tow. What happens now? Are we done with the Night’s Watch and will the focus turn to Sam’s adventures with his new family?

Either way, I hope Caster’s wives and daughters like dudes in black.

1. Patience is a man’s best weapon when seeking revenge
2. Don’t cross Varys…or cut his junk off

Last season Tyrion had a clear cut agenda: save King’s Landing from being invaded by Stannis and from being ruined by Joffrey. His agenda this season is slightly smaller in scale- get revenge on his sister for attempting to have him killed during the Battle of Blackwater. It seems manageable and entertaining. Win, win.

Breaking News: The Brotherhood Without Banners are big fans of the same fire God that Stannis’ lady in red is. And in related news, I totally feel that’s going to come into play down the road. As for Arya, just hanging out and implicating dudes for murder. No big thing. Pretty routine for her. Keep doing your thing, girl.

Oh, and Hound- before you start shit talking dudes for hiding out and avoiding fights, take a moment to remember what you’re doing in the woods and not at King’s Landing. K, thanks.

Listen, we all kind of, sort of feel bad for Jaime Lannister these days. He’s drinking horse urine, sleeping in the mud, walking around with his severed hand draped around his neck. He’s having a tough go of it. He even saved Brienne from getting raped by coming up with a quick lie about her family. Pretty clever, pretty endearing.

But you know what’s not endearing?

So yeah, don’t feel too sorry for him.

And props to Brian MacDonald for pointing that out.

I don’t know what Margery Tyrell is up too and I also don’t know how interested I am in it. No wait, I am interested. I think I’m very interested! So scratch that. But I still don’t know what she’s up too. If anything, I just hope she doesn’t turn Joffrey soft because that’d be a bummer. Game of Thrones, you can do many things, just don’t rob us of one of the best villains ever to be on television. Also, what is Margery trying to accomplish by becoming besties with Sansa? And really, how many bad things has to happen to Sansa before she stops trusting people? Eleven? Eleven bad things? That seems unreasonable. Get your shit together, woman.

As for other happenings in lovely King’s Landing, look out world, Tywin Lannister is writing letters and making plans. You know what happens when Tywin writes letters and makes plans? Nothing good, dude. Nothing good at all. But wait, who exactly is homeboy writing too? I wish it was Arya. They were fun together.

Side note: how much more interesting is Danys’ adventures within the context of this fact- NO ONE IN KING’S LANDING HAS ANY IDEA WHAT SHE’S UP TOO???

7. A Stark in King’s Landing: Sansa

Okay, back to Sansa. Really girl, how many bad things has to happen to you for you to stop trusting people- especially in King’s Landing, where your Dad was killed and you are currently a prisoner? I don’t have statistics in front of me, but Sansa might be the dumbest, or at the very least, one of the dumbest people on television today. She makes Henry Crane over on Mad Men look like a brain surgeon who specializes in tact.

In the running by default. That’s it. I have no idea what’s going on with the youngest of the Stark brothers, where they are or even where they’re going right now. I’m not even sure what the merits are of Bran seeing through the eyes of animals. I do however wonder, if Bran can see through the eyes of animals does it make him more likely to understand what Hodor is saying?

The same people that were before unfortunately.

10. Jon Snow’s Adventures Beyond the Wall

Walking, moping, thinking about Ygritte. Other than that, not much to report. But stand by on that one.

11. The King of the North’s Honeymoon

Probably writing letters of his own- letters about Tywin.

12. Stannis “The B Stand for Plan B” Baratheon