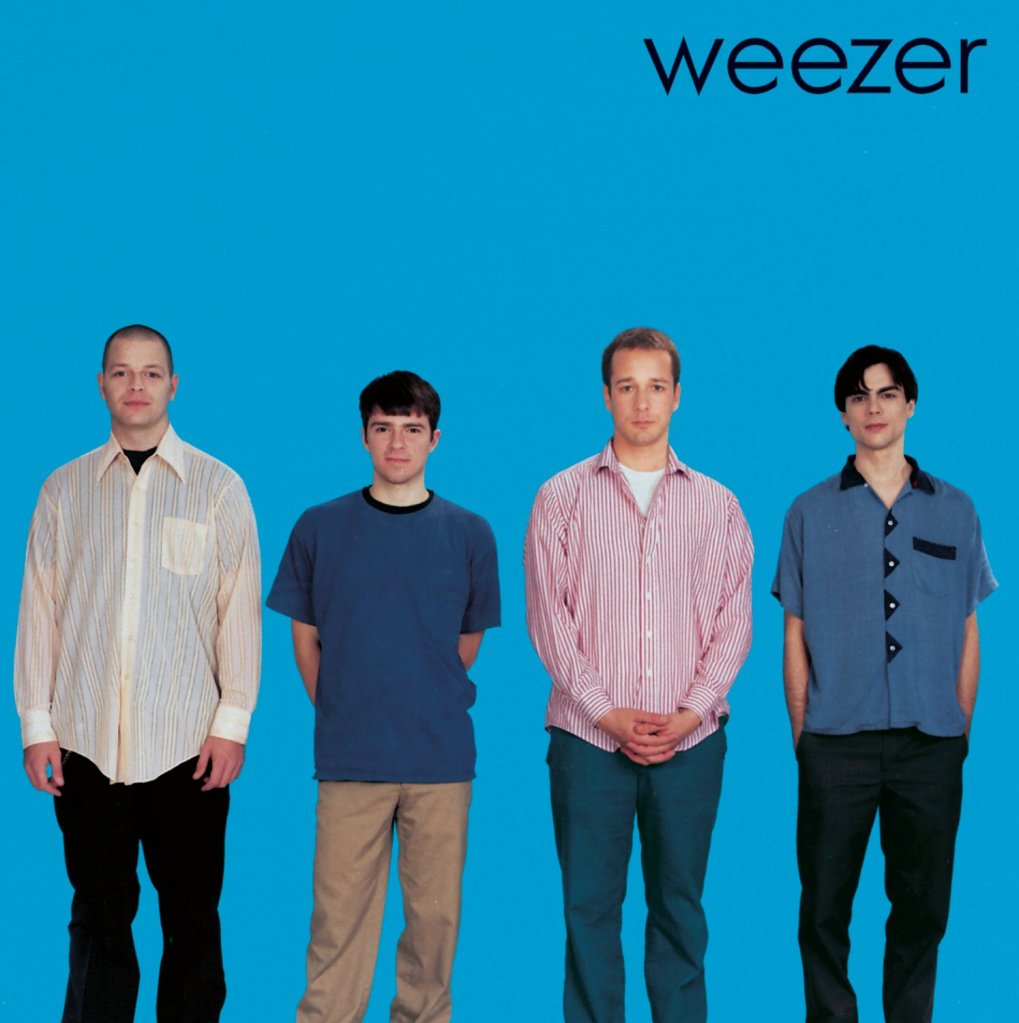 To celebrate the fact that so many great albums were released in 1994, Giddy Up America is looking back at some of the best and some of my favorites. You can follow along on Spotify with Giddy Up America’s Albums of 1994 playlist.

On May 10, 1994, Weezer released their debut album. It was the self-titled one, the first self-titled one. It’s also referred to as the Blue Album. They do like their colors. It’s adorable. A blue album, a green album, a red album. Weezer gets down with consistency.


Think about some of your favorite albums and what makes them so great, so memorable. One common thread? The opening track. It sets the tone, kicks the door open and introduces you to the rest of the team. “My Name is Jonas” is easily one of the best opening tracks out there. It’s on a list with Led Zeppelin’s “Black Dog,” Nirvana’s “Smells Like Teen Spirit,” and Guns ‘n Roses’ “Welcome to the Jungle.” I love how it sneaks up on you with just the acoustic guitar- so friendly and welcoming before the thunder comes in, that hammering of notes that starts each verse. Then it becomes so wonderfully melodic. It does everything a great opener needs to do in that it lets you know exactly who Weezer is- pop rock scientists.

And they were scientists, especially Weezer’s frontman, Rivers Cuomo. The majority of songs on The Blue Album were the product of an experiment Cuomos conducted, challenging himself and Weezer drummer Patrick Wilson to write fifty songs. I also remember reading a story about how Cuomo kept a journal of great songs and thoughts and ideas on what made them so great. He was a student of rock music and wanted to know what made a good song; why a song was so popular, why one wasn’t, etc. He wasn’t looking to reinvent the wheel, only to make a wheel of his own. He didn’t want to be a new kind of Nirvana, he wanted to his version of Nirvana. Then he wanted to live in a garage for a year. But that came later. He also enrolled in Harvard on a whim. That also came later. He also had a thing for Japanese gals. That might have been going on during this time.

Long story short- Rivers Cuomo is an interesting dude, who may or may not currently be celibate.

Weezer’s first single was “Undone- the Sweater Song” and it was the majority of people’s first exposure to Weezer. At first it’s nothing special and follows the basic template of quiet verses and a loud chorus. But it begs you to dig deeper and be enchanted by the melodies and unabashed pop sensibilities that came to define the song. The video put faces to the music, something that doesn’t really happen today. The faces of Weezer were not the faces of other bands popular at the time- bands like Nirvana, Green Day, Metallica and more. Let’s be honest, the dudes in the “Undone- the Sweater Song” video are delightfully pleasant nerds. And the dogs are delightful too.


I don’t even know- would they be considered hipsters now or still just nerds?

Not that there’s anything wrong with that.

Either way, Weezer looked and sounded like nothing else that was happening musically at the time. But hot sugar britches was their music infectious. Nirvana was not fun, Weezer was fun. Nirvana was angst, Weezer was all sunshine, man. In retrospect, it’s fitting that The Blue Album was released a month after Kurt Cobain died, as if a changing of the guard was happening. In reality, it wasn’t really one. The amount of Nirvana copy cats spawned by Nirvana far outnumbered the amount of Weezers out there and the days of doom and gloom didn’t die with Cobain. Weezer was not a replacement for Nirvana, more like an alternative. Grunge had it’s corner, Weezer had theirs.


There isn’t a chance I could even guess the amount of times I watched the video for “Buddy Holly” when it came out and was all over MTV. And watching it just now, it’s still great. Yeah it was kind of like Nirvana’s video for “In Bloom,” but personally I think it was better. The tone of the video is awesome and I love how the video embraces the dope cheesiness of Happy Days, as well as the same kind of cheesiness that embodied Weezer. “In Bloom” was sharper in it’s look back, borderline vengeful. It was a statement that Nirvana didn’t belong in that world. Weezer’s was more loving and done with more reverence, and again, highlights their role as students of pop music. It also highlighted that they totally belonged in that world and were super cool with it. They just weren’t cool with the fish.

But it doesn’t do The Blue Album justice to just focus on those three songs because every effin’ song on the album deserves praise, whether it’s the energetic faux-surf anthem “Surf Wax America,” the melancholic tunes- “Say It Ain’t So” and “In the Garage” or the other rockers on the album, “The World Has Turned and Left Me Here,” “Holiday” and “No One Else.” And then there is the last track, probably the track that provides the best glimpse into the future of Weezer, the eight minute long “Only in Dreams.” I think it demonstrates almost perfectly what Weezer wanted to do with their musical career- to test limits of pop music.

Celebrating The Blue Album is celebrating a moment in time, a moment when we needed a breath, we needed a smile. We embraced the downtrodden sound of grunge but that wasn’t all of us. For a lot of us it was just a part of our day, not our whole day. We needed to have balance out our lives and Weezer helped us do that.

The Blue Album will always live in a world where Nirvana is king, but every court needs a jester.

Weezer was happy to oblige.