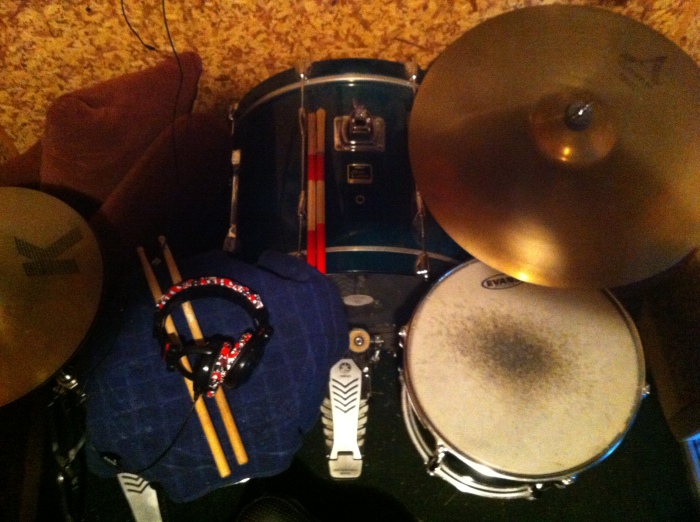 An enemy of aiming for endurance is a short attention span, which is the issue I have. I get distracted. I get antsy. It takes a special ability to zone out while simultaneously staying focused and paying attention. You have to go to a place. It’s not an interesting place, but it’s a place that holds your attention. It’s a place where all you hear & see is the song you’re playing. It’s a fun place. I’d recommend it to anyone.

But it’s a place that can be hard to get to when you’re on your own. I remember back in Portland, at the rehearsal studio off Warren Avenue and practicing in our room. I could hear the old drummer for Paranoid Social Club, Marc Boisvert, practicing in the next room. Marc was a computerized weapon of a drummer. He was as locked in as anyone I had ever seen in person. While not so much anymore, PSC used to rely heavily on samples. The samples are what set them apart from other trios, making them sound so much bigger than three dudes could sound like. Marc needed to be machine-like to get by- playing along to both humans and machines. Not much of a human element really. So I could hear him in the next room and he was practicing. I could hear the click track and here him do something like hit the snare drum for minutes on end to that click track. Or keep time on the high hat with the cymbal. To this day, I have no idea how he did it. Playing to samples has become much more common place now, so what Marc was doing might not seem as impressive these days. But back then, back in like, 2004, I thought it was.

I’m a keep it simple kind of drummer. I like beats.

It can be monotonous.

It can be even more monotonous if you’re not in a practice space off of Warren Avenue and instead, in the back room of your garage in your quiet, little beachfront community. Gotta keep those levels down, hombre. The cops will come. Be a gentlemen when they do, but best know- cops will come.

And that is the situation I’m in now- obliged to play at reasonable volume levels to appease the neighbors. I am not complaining. At least I’m able to play- a step up from apartment living in the city. And I’d be damned before I got electronic drums. They might be fine for some people, but not for I, sir. Even though I don’t get to hit the cymbals as much or as loud as I like, I still like the sound they make. I like the feel of real drum heads. Running across some electronic drums always felt so unforgiving and unsatisfying. Not for me. Not at all.

To help make playing more interesting and appealing, I play to my iPod. I got these big ol’ headphones back at a DJ competition. A bonus for a job well done. They’re nice and loud. Very helpful. I have about six songs I play too.

Any song by One Day as a Lion is also good. As is “Destination” by Tony MacNaboe. Songs you can easily lock into. Songs with steady drum beats. Songs like those make it fun to play when you’re rolling solo. It help replicates that feeling of playing music with other people, which is one of the best things in the world to do. It makes you play songs. It gives purpose to your drumming. Drummers do like their purpose.

I do want to get out of the garage at least one more time in my life and play some jams with some folks. I really do. But until that day, I’m fine with the situation I’m in now. Like most things, it could be worse.

Like Loading...
‹ What Not to Do in the Midst of a Zombie Attack
Mad Men Recap: Learnings ›