Before getting into the season, I wanted to call attention to something I realized rewatching this season.

If you’ve seen season four, then you know that these things are going to happen:

Those are the major points and if you’ve seen the season, you know that they happen and thankfully, are prepared for them to happen. However, what stuck out to me this time around is how much time passes before some of this stuff happens. This season is super front-loaded. So much so, that a lot of this stuff or at the very least, a good chunk of these noteworthy plot points don’t go down until the season’s third act. Randy doesn’t get labeled a snitch until episode ten and then doesn’t start to feel the impact of that until an episode later. By episode 12, Randy’s foster mother is badly burned after dudes firebomb their house.

Sherrod doesn’t accidentally take that hotshot until episode 12 either. Bubbles is mostly a fringe player in season four. Not as much as McNulty is. But he’s out there on the edges. When he is around he’s not the sad clown he was in earlier seasons but instead just sad. The show’s Shakespearean fool spends most of the season getting his ass kicked by a junkie, which is how the hotshot comes into play.

I guess I was just surprised that all of this stuff I knew was going to happen, doesn’t happen until later in the season. If anything, it speaks to how jam-packed the season is. There’s so much going on! Past seasons definitely had their fair share of action and different plot lines going in several directions but not to the extent season four branched out. Season four is the show throwing it out there, leaving no stone unturned. They’re not just throwing heat, but dealing every pitch they have in their arsenal.

Ultimately with season four, it’s a lot to process but it’s glorious to do so. Season four is easily the show’s best season and coupled with Avon’s return halfway through season three, it’s probably one of the best runs a television show has ever had and likely ever will.

Bunny could have easily disappeared after season three, especially given his unceremonious exit following his half-baked plot to legalize drugs. He could have maybe shown up once or twice and that would have been it. But this is why David Simon and crew are so good at this. They knew what they had in both the character of Colvin and Robert Wisdom, the actor who played him, and that it was too good not to use again.

Going into the fourth season, the show wanted to show what was wrong with the school system in season four. Moving Prez over as a teacher after he was let go from the Baltimore Police Department helped and gave us a friendly face to connect everything going on in the school with both the rest of the show throughout season four and what we had understood the show is leading up to the fourth season.

But bringing in Colvin helped even more so, especially through his work with the corner kids in the special classroom, most notably Namond. Colvin shows so much sympathy, empathy, restraint, and compassion once he gets in the school that it’s captivating to watch. And when he starts to form a connection with Namond, get out of here. We can get into the fates of the four boys later and whether or not it’s fair that Namond was the one who got out, but what’s not disputable is the genuine connection he and Colvin have.

Every scene Bunny Colvin is in is a winner, no matter how inconsequential it might be.

Got a pen because you’ll want it to keep track of Herc’s mistakes, blunders, and royal fuck ups.

The only good thing Herc did all season was not bringing Syndnor and Dozerman down with him when he finally gets busted. But at that point, Herc had piled up some “oh shits” that there weren’t enough “attaboys” to save him. 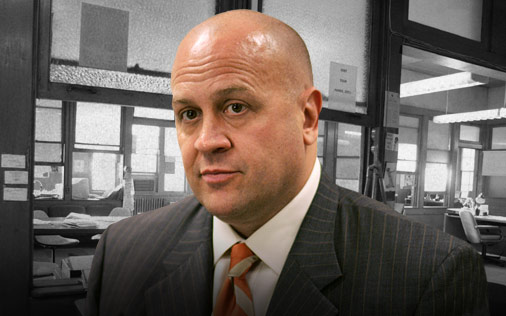 Norris had been around for a while on the show but we get more of him this season and I love all of it. Norris is so wonderfully cynical and sarcastic, it’s great. His best moment is when he’s working the dead witness angle with Kima and looks to fuck with the election. Not because of any particular party affiliation, but just because he wants to. “I don’t even vote,” he says.

Fun fact: Norris is an ex-cop.

One Thought On Each Of The Main Kids:

In a way, he’s kind of like Stringer was. He wasn’t made for life on the streets. He bucked too easy when pressed. Cutty knew it too when he overheard Randy talking to the Vice Principal in the office. The way Cutty was looking on and then reacted was a solid touch.

Rewatching the season again, I feel like Michael breaking bad could have been developed more. It feels like it happens pretty quickly

I don’t know if it’s more heart-breaking knowing how things shake out for him or not knowing. Either way, it’s painful.

I remember initially being kind of upset that of the four boys, it’s Namond who essentially gets out. It didn’t seem fair. But thinking about it, it’s not fair that because of who his father is, he’s supposed to be a certain kind of person and live a certain kind of life, even though he doesn’t want to and more importantly, isn’t equipped too. He deserves a break just as much as the other boys do and lucky for him, he gets one.

How does he reach the pedals? I’ve always wondered that.

When you watch the fourth season again, you can almost see an end coming for Bodie. He’s clearly not part of the game anymore, at least not the game as it’s now played. He’s like a relic from a lost time. With the Barksdale organization gone, he’s left to fend for himself. Slim jumps ship and heads to the east side to work with Prop Joe, but Bodie is a soldier, and soldiers get used up and passed back and forth all the time.

I wish we could have seen more of Bodie and Lil’ Kevin’s relationship because it would have made Bodie’s reaction to seeing Lil’ Kevin’s body being carried out a vacant that much more impactful. But even still, it was definitely a breaking point. Bodie’s not clean. Bodie killed Wallace for crying out loud. Yet to Bodie, Wallace deserved it, and also it was an order he was asked to carry out. To him, it was justified. The justification to kill Lil’ Kevin wasn’t as strong.

The Wire has such a deep bench that some of the role players can get lost in the shuffle, but Bodie was a stud and was one of those guys that could give the show instant offense when it needed it. Wallace’s death hurt but Bodie’s might have hurt more partially because we spent more time with Bodie. We grew up with him. The relationship between Bodie and the audience was just much stronger and as a result, his murder hurts more.

Let’s Give It Up For The Good Guys

First up, Carver. Talk about a change in direction, huh? I’d imagine it was something to see if you were watching the show in real-time but binge-watching it and thus, seeing Carver’s change happen in a more condensed fashion makes it seem even that much more remarkable. Carver was a tough hang during those first few seasons but he becomes someone you are genuinely cheering for in season four. I think part of that is because we witnessed him getting schooled by Daniels and then Colvin and taking those lessons to heart. Then we see him essentially interpreting and applying those lessons. It’s growth. Whereas Herc never really changes and keeps barreling along undeterred, Carver undergoes a pretty considerable change and it’s really cool to witness.

Next, there’s Cutty. Season four has him now a little more established as the owner and operator of the Avon Barksdale Memorial Boxing Gymnasium. He stumbles initially, due in large part to making it with his fighters’ moms, but once he comes around, it’s like Carver, endearing and an easy mark in terms of sympathy.

There’s so much despair in The Wire, especially in season four, that it’s nice to have at least a couple beacons of light shining through the fog.

Three Questions I Have About Snoop & Chris

On a related note, the opening of episode 12, which features Michael being chased by Chris and Snoop is definitely tense the first time you see it but on a rewatch, not as much. If anything, I kind of felt a little bit cheesy. Almost cute seeing them play commandos.

Would I Vote For Carcetti?

Yeah, probably. He talked a good game and Royce seemed slimy as hell. I feel bad for Tony Gray, though.

Knowing What I Know About Season Five, Here Are A Couple Things I’m Looking Forward To:

On to Season Five.

Like Loading...
‹ Now Is The Time To Get Rid Of Daylight Savings Time
Ten Playlists To Help Get You Through Election Day(s) ›