How do you concentrate when there’s so much going on in the world? I can’t. But here’s 12 things that have come across my brain desk this week…
Always nice to get my band, Me & My Drums, back together.

I love Boardwalk Empire and try to not to say anything bad about it. But here’s something I realized the other day- True Blood has gotten frustrating to watch because they’ve added too many story lines and with each one hour episode, there is roughly 25-35 minutes included that I simply don’t care about. The show was at its best when it was just keeping it simple (i.e. crazy vampire plots & storylines.) Boardwalk is edging dangerously close to this same problem; especially this season. I’ll stick with it, but I won’t be totally surprised when Owen Sleater reveals himself to be some kind of magical leprechaun.
“Please proceed, Governor” is the new “Go eff yourself, San Diego.”
I do enjoy a good Yankees’ loss.
“I have to go pick up Gandhi’s grandson,” I said.
“That’s not something you hear every day,” Erin replied.
“It’s not something I say every day.” 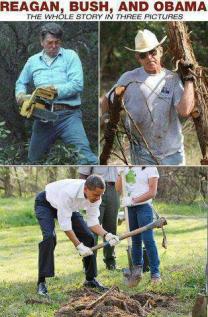 I think that in general, politics don’t really belong on Facebook- although when thinking about it a little more, I guess it’s fine. I just wish there was a filter I could set up that blocked people’s political posts. Facebook as a whole could really benefit from more filters: parents filters, work filters, inside joke filters. But as far as politics go, I ignore most of the things people put up, but one picture stuck out at me and I’m still not sure what it meant. A friend from college posted a picture of the following: Ronald Reagan wielding a chain saw, George Bush hauling brush & Barack Obama awkwardly swinging a pick ax. Are we supposed to vote for the person who landscapes the best? If that were the case, wouldn’t Mitt Romney’s landscaping company have the best case for being President? Wouldn’t Carl Spackler be the new Reagan? I’m confused about this one.
Hardest decision of the week: haunted hayride or haunted walk. I have no idea how you pick one over the other and what your basis would be for doing so.
Best Shows on Television Right Now (in no particular order & determined by yours truly): Homeland, Parks and Recreation, Boardwalk Empire, It’s Always Sunny in Philadelphia and The Office. Yes, The Office. It’s making a comeback in its final season. Biggest difference between this season and last season is that this season I’m laughing because things are funny, not laughing because I feel bad for the show and feel like I should.
Your weekly SAT Analogy- CVS : Rite Aid :: Target : Wal Mart
Local Natives are back, which is great news.
I can’t tell if I’m bad at fantasy football or just unlucky. Either way, I’m not winning, which is unfortunate. Get your shit together Matthew Stafford!
How come the weirdness of Mormonism hasn’t been talked about more during this election? I mean, that shit’s weird.
Pumpkin flavored beer is my favorite non-beer tasting beer.