I Think This Harry Styles Kid is Gonna Be Something Someday

So these people, things, general beings or situations are having a pretty good 2017:

And not be left off that list: Harry Styles

So Harry Styles, real name is probably not Harry Styles because I’m not sure Styles is a legitimate last name unless you are a character in an ’80’s movie, came up in a boy band. It was One Direction. I’m 37 years old. I can say “it was One Direction” and be given a pass for saying that with some degree of uncertainty. One Direction were kind of a big thing. They performed on Sesame Street – that’s when you know you’ve made it.

At some point in recent history, One Direction ceased to exist. I don’t know if the break was permanent or temporary and I don’t really care all that much. The group members decided to go their separate ways and the world patiently awaited solo projects from each dude, presumably with each project reflecting that fella’s true desires and passion, because you know, in a group, you have to give a little. Not so as a solo artist. It’s your show, baby.

I think, and I could be wrong here, that our boy Harry was the first member to drop a solo album. Early word was that Harry had looked to 1970’s rock ‘n roll as an inspiration, which is you know, kind of interesting. He then released a track and it did kind of have that vibe.

It didn’t make much of an impression on me. If anything, it sounded kind of boring. I was not yet about the Styles Wagon.

However, two of my co-workers very much were, and when his album was released, they were very excited and repeatedly urged me to listen to it, which I finally did because I’ll never not eventually buckle to peer pressure. I got past the first two tracks, tracks that were shrug-inducing, but the third track, “Carolina” was the one that made me pay attention.

“Carolina” has some serious 70’s rock swagger to it. It shimmies and is smooth in an almost unsettling way. If “Carolina” showed up at your door, looking to take your daughter out, you would have some serious reservations.

Now fast forward and here is a hot take about the Harry Styles album. Are you ready? Okay. Harry Styles’ album contains one of the best rock songs released this year so far.

Nay-say all you want but “Kiwi” is what we should want out of a cock and balls rock ‘n roll song. It’s loud, anchored by a driving groove and has a hell of a fun chorus you can easily sing-along too. Rock ‘n roll is staring straight ahead toward it’s last possible days as Rap and Pop music have become the football and basketball equivalent in the battle of musical genres. Rock music is baseball -it’s localized, it’s becoming increasingly niche and looking more and more outdated. As with baseball, rock is rooted in a format that isn’t exactly the most open to change or advancements. It is what is, for better of worse.

Saying Styles has one of the best rock songs of the year isn’t a slight or even a commentary on the sorry state of rock music. It’s just a statement of fact. There’s other good rock songs out there – Dan Auerbach’s “Shine on Me” is good, so is “The Way You Used to Do” by Queens of the Stone Age and anything produced by Royal Blood, the Japandroids or Beach Slang. And this new Foo Fighters’ album that is coming out later this summer sounds like a effin’ monster truck based on what Dave Grohl recently told Rolling Stone. So rock is still alive, it’s still kicking. So it’s not a lack of competition that would lead me to say Styles’ “Kiwi” is one of the best rocks songs of the year so far. Cross that off.

“Kiwi” is one of the best rock songs of 2017 so far because it is -plain and simple.

When it comes time to take stock of the 2017 Grammy Awards nominations, I’d be surprised if Styles’ album wasn’t nominated a handful of times, one of which for Best Rock Album. There will be griping by rock purists when it happens, but I could bet you good straight cash homey that none of those rock purists would have listened to his album. It’ll be an Internet bullshit sandwich for a day or two for no good reason other than that someone hadn’t listened to that which they are bashing. You know, kind of like pretty much every Internet bullshit sandwich. Plus, wasn’t Disturbed or someone like that nominated last year for performing “Bridge Over Troubled Water” on Conan? Let’s not pretend the Grammys started not treating rock music seriously only recently.

But here is why I think this Harry Styles kid might be something someday and why he’s having such a good year – the Grammys won’t be the only major award show he’ll be attending this year. He’ll be at the Oscars too. 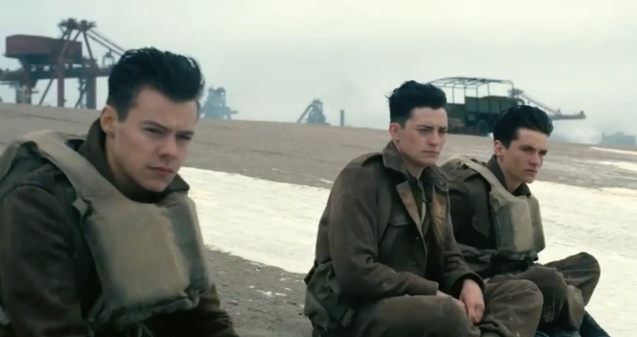 Styles is one of the second-tier stars of Dunkirk, the new World War II masterpiece by Christopher Nolan. Styles plays one of over 300,000 British troops trapped on the beach of Dunkirk, trying to get back to England before England is attacked by the Nazis. Styles is unrecognizable at first. He’s another dark-haired, white dude getting pulled out of the water, escaping a sinking ship, of which there are many of both. His first words spoken are done with some delicious looking toast and jam in his mouth and all he says is “where’s your friend” to Tommy, another dark-haired white dude. He and Tommy are inseparable from that point on.

The stars of Dunkirk are Mark Rylance, Fionn Whitehead who plays Tommy and to lesser degrees, Tom Hardy, Cillian Murphy and Kenneth Branagh. But right below that first tier are actors out there killing it and Styles is at the head of the pack. He’s really good in the movie, so much so, it’s kind of surprising and more importantly, it doesn’t take long for you to realize it’s him and then subsequently forget that it’s him, viewing him as yet another solid actor doing his part to help complete a work of art, which is totally what Dunkirk is.

Styles won’t win any awards for his performance, but given his stature in pop culture, when it comes Oscar time, he’ll be synonymous with Dunkirk, mentioned in the deluge of think pieces and stories written about it and focused on in interviews when the time comes. He’ll defer to Nolan or one of the other actors, but he’ll get the questions nonetheless.

I imagine striking out on your own from an endeavor as successful as One Direction is tough; it’s got to be daunting and you probably have no shortage of available options when it comes to what to turn to next. I’m sure Styles was presented with several ideas and pitches that would have been easy for him to do. But he didn’t go the easy way.

Harry Styles decided to make a vintage-sounding rock album when very few people are making rock albums in general and for his first acting gig, he landed a role in the passion project of one of the best directors alive. You can’t tell me he wasn’t offered a romantic comedy or two – something where he could have just been Harry Styles and done Harry Styles things. And you wouldn’t be able to convince me he wasn’t approached by a noted pop producer with songs ready to go – songs that could be first cousins of those done by One Direction.

Instead of sliding into the future, he jumped head first. Making it even more of an impressive feat, he did it successfully.

So I don’t know about you, but I think this Harry Styles kid may have a future.

Like Loading...
‹ Dude, I Think There’s a Rat in Danys’ Crew
GoT Plot Line Power Rankings: ‘The Queen’s Justice’ ›