You know what Sunday night’s episode of Game of Thrones was, don’t you?

Yeah, it was basically Game of Thrones and Queen Cersei, first of her name & not to be eff’d with, showing us who’s boss and reminding us what show we’re watching. Heading into season seven, you could be easily forgiven if you though Danys and Team Dragon were going to stream roll Cersei, take King’s Landing and by episode 5 or 6, team up with Jon and turn their attention toward the danger lurking beyond the wall. I know I kind of thought that and now I kind of feel like a buffoon.

With “The Queen’s Justice,” the show not subtly reminded us of what we’ve been watching for the past six seasons, where the bad guys typically come out on top, especially in the earlier parts of seasons. This is not a warm and cuddly show and they let us know that from the jump. It’s our damn fault for thinking otherwise. And this is just the beginning. If you think Cersei is bad now, just wait until Daenerys mounts her eventual comeback and pins Cersei in a corner. If Cersei has zero eff’s to give now, just wait until her eff’s to give ledger enters the negatives and she doesn’t give a gosh darn damn.

So with that being said, our song of the week goes out to Cersei because God help us if it didn’t.

On to this week’s rankings.

In your rankings, you might have Cersei’s shenanigans sitting in the top spot, but not me. I still firmly believe all the Cersei stuff is filler until the main course comes, which is why I have Daenerys and Jon finally meeting is number one. This season has been full of long-awaited interactions between characters, whether it’s Lady Olenna and Danys, Danys and Dragonstone, Arya and Nymeria among others. Dude, the scenes with Jorah and Sam were cool, but it’s not as if we had been expecting them. Yet the one we had all been waiting for was when Jon met his aunt.

It didn’t disappoint, but it was a touch bit uncomfortable. Actually, it was super uncomfortable, especially early on. For all of her revolutionary spirit and talk of breaking the wheel, Danys is still a traditionalist when it comes to formalities and that was on full display when Jon and Davos pulled up to Dragonstone. They took their swords – somewhat understandable. They took their boat – mildly understandable. They buzzed him with a dragon – just showing off. And I’m going to be honest when I say this, but Dragonstone would be wise to invest in a golf cart or two. Man, talk about a hike.

Then, the moment we had been waiting for.

For starters, Missandei’s hype man game is strong. She has the titles, the delivery, the pacing. Real strong work there. We can’t say the same for Davos, though. Davos dude, need to bring the A game buddy. Although in his defense, maybe he was just tired from the hike from the beach? Can’t blame him.

Now let’s talk about the delicate art of asking for something. Anyone can ask for a beer, for a cigarette, for some spare change. That’s easy. However, it takes some skill when asking for something bigger – the more skill with the bigger the ask. In Danys case, she is essentially asking Jon to bend the knee, acknowledge her as the rightful queen of Westeros. But is she, though? Uh, kind of debatable. Either way, asking Jon to ditch the whole King of the North thing would mean Jon betraying his people, which in turn, makes it a pretty ask. Danys would have been better suited to approach it with a little more subtly, more lead-up time.

Yet if Danys’ ask is questionable from a realistic stand point, it’s certainly far more realistic than Jon’s ask, which is basically the equivalent of him asking her to believe in some crazy shit, ditch her current plan and help him with the aforementioned crazy shit. Jon buddy, your ask is pretty wild. You need to set the stage a little better than north of the wall is an army of dead and I need your help to kill them.

Dany: I feel like you should give me more than just "army of the dead"
Jon: The Night King
Dany: ?
Jon: …
Dany: (to Tyrion) The fuck?

Dany: You just said "army of the dead" and then clammed up
Jon: I've said all I need to say
Dany: But you havent, though, is my point

Jon, you can’t pitch a battle against an indestructible army of ice zombies in less than a sentence or two, which is generally your move. You need to elaborate some, maybe provide some examples. Was a Power Point presentation not an option? I would have probably kicked him out too, especially when during this weird ass conversation you learn you just lost half of your navy.

Of course having a quick, albeit scenic conversation with Tyrion helped matters and Tyrion was right when he told Danys that Jon wouldn’t be here unless he was serious. Flash forward to next week and Jon could probably ask for a lot more from the Dragon Queen because home girl is going to need some friends, stat.

2. Keeping Up with the Lannisters

I mean really, we were damn fools if we thought she was going to go down without a fight. Now the tables have turned and just like that, Danys is the under dog and Cersei looks damn near unstoppable. Her enemy list is getting shorter by the day.

She probably off’d a production assistant or two just because that was the kind of mood she was in.

Now she’s taken out her revenge on Ellaria for killing her daughter, wiped the Tyrells off the board, used the Tyrells’ loot to appease the Iron Bank and installed friendly allies in the place of the Tyrells. Sure, losing Casterely Rock might sting for a second, but when was the last time she was even there? When was the last time any Lannister was there? The good people of C.R. haven’t seen their landlord in weeks and most likely won’t anytime soon – a super bummer if they’re looking to get that leaky faucet looked at.

Cersei though, a quick word of advice…I’d be a little nervous about Euron. That dude is a wild dog and you can’t keep someone like that on a leash for long before they snap at you. I’m sure Cersei has thought of this, but it’s worth noting that she also thought she could control the High Sparrow and that backfired pretty fantastically.

And hey, people of King’s Landing, what’s with the Lannister love? You know she blew up the Sept of Baelor, right? Man, talk about fair weather fans.

With Jon down south, never a good place for a Northern king in case you missed that gentle reminder(s,) Sansa is running things up in Winterfell and doing so pretty damn well. She’s got that power walk and talk down to Sorkin-levels of expertise.

Sansa’s inspection of the current state of affairs at Winterfell was a casual reminder of something I’ve long believed: women are just smarter than men. This isn’t feminism, it’s just being realistic and honest. Case in point, sweet chest plates dudes. but you do know it’s getting cold as balls, right? So maybe add some leather instead of just making them look cool. Women know that details matter. I don’t know, maybe we should have a woman president sometime. It’s just a thought.

Besides Sansa taking to leadership well, there were two things that happened in Winterfell this week that are worth noting.

First there was Little Finger’s double-take when the current Maester of Winterfell mentioned that the old maester, Maester Luwin (he was around during the first two seasons…you’d remember him if you saw him, so here) kept meticulous notes, even going so far as to keep every raven message he ever received. No deleted emails in Winterfell! When this is said, Little Finger perks up. Now I don’t know why, but it stuck out to me. Did he send a raven to Winterfell once that could doom him in this current political climate? Or maybe, given his penchant for knowing everyone’s business, he thinks he can mine the old raven notes for some useful information. Either way, I don’t trust that son of a gun, so I’m just going to assume he’s up to something shitty.

Then our boy Bran returned from his semester abroad and like every friend you had in college who did a study abroad, he was kind of obnoxious upon returning. Bran also fell victim to the same problem Jon had, not being able to fully explaining things.

In his defense though, Bran is getting swamped with emails about the past, present and future of Westeros. He’s a little too distracted to be bothered by things like empathy and tact.

4. The One Where Sam Reads Books 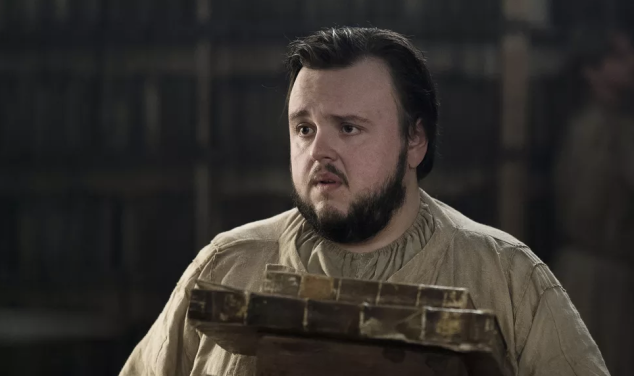 OH MY GOD, GREYSCALE…IT’S TERRIBLE…YOU’RE GOING TO DIE AND GO CRAZY AND LIVE A LIFE OF LONELY CONFUSION.

5. The One Where…Ugh, Freakin’ Theon 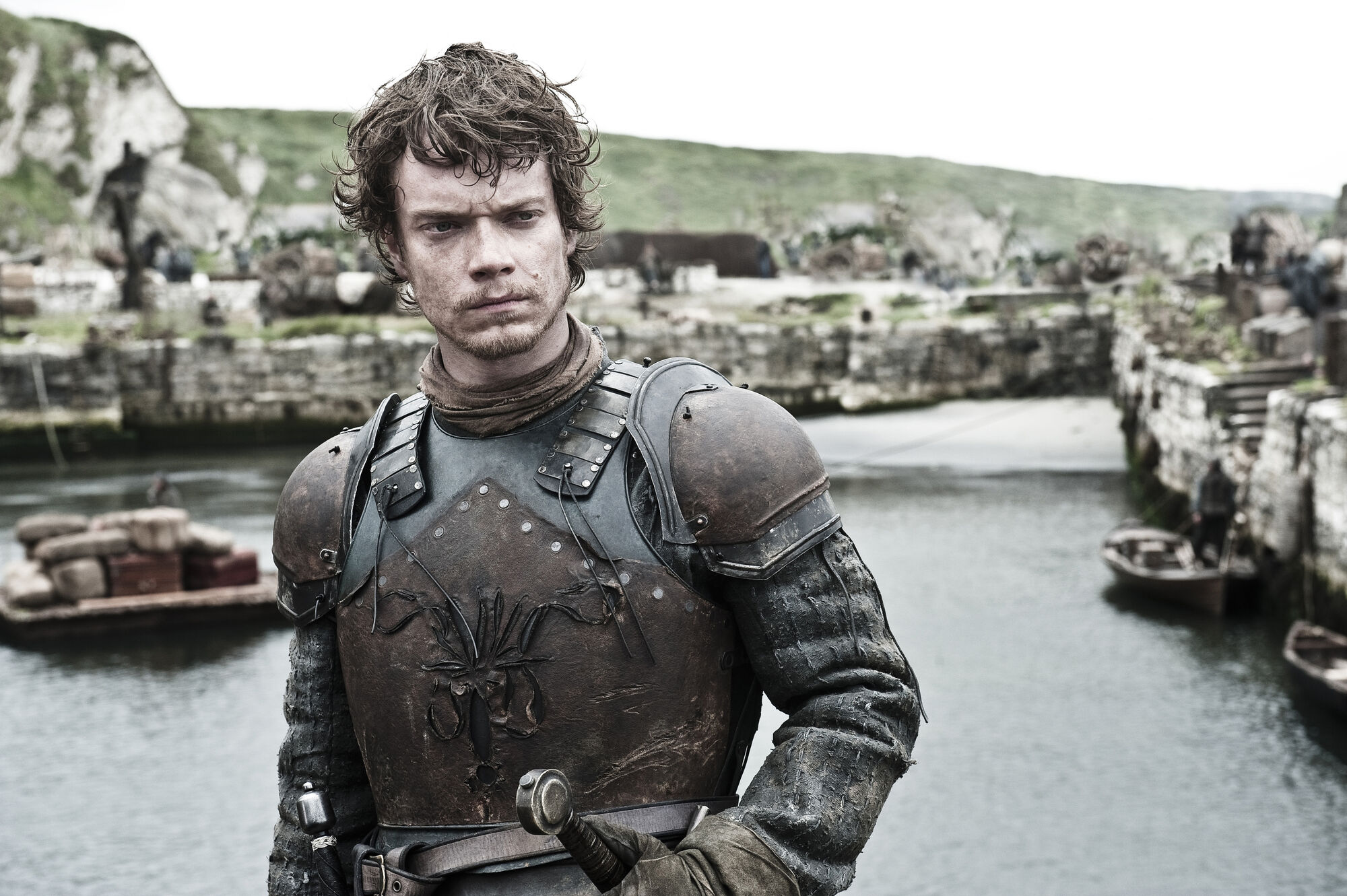 When reached for comment, Giddy Up America had none.

Like Loading...
‹ I Think This Harry Styles Kid is Gonna Be Something Someday
The Yankees Are the Yankees Again (and That’s Good for the Red Sox) ›