Home › Television › Bringing a Tank to a Gun Fight

Bringing a Tank to a Gun Fight 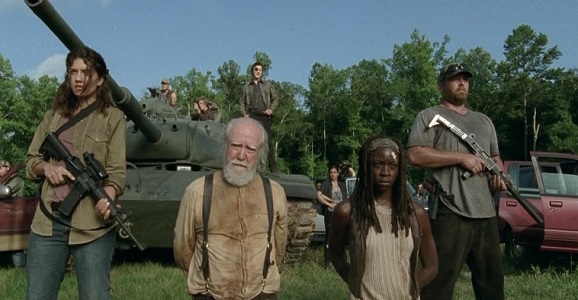 They brought in a tank.

In the mid-season finale of The Walking Dead the show’s creators threw it all on the table…and by “all,” I mean their “man parts.” In doing so, the creators, whoever they may be now because they’re not who they were because that dude is suing them, wanted to show just how big said man parts are.

A tank that blew up their set, and if you’re keeping track at home, then that’s two seasons in a row where the show has destroyed the dilapidated sand castle they call a set. Our dear friend the prison now sits in a retirement home in Boca with Herschel’s farm, collecting royalty checks. Good for them. And speaking of Herschel- that dude got his effin’ head cut off. By a samurai sword. Wielded by a dude dressed up like Han Solo.

Just a reminder, this is a show about zombies.

Or at least it was.

I appreciate the ballsy bluster of “Too Far Gone.” I really do. Why not just go for it? Why not throw all your cards on the table, then flip the table over, set fire to the table and then say eff you table and walk on to the next game? Why not put the zombies in the background and make the show no longer about man versus zombie, but man versus man? Because hey, why the hell not? This is The Walking Dead, not Downton Effin’ Abbey.

But that’s not the point, is it?

The Walking Dead isn’t Breaking Bad or Mad Men. It’s not Game of Thrones. It’s much more Boardwalk Empire or True Blood than any of those. Not much substance or subtext really. Just pulp-drenched fun. Sit back and enjoy the ride, will you. Enjoy the grand buffet laid out before you- a buffet featuring a tank, a samurai sword, grenades, and innocent looking children shooting lesbians in the forehead. Enjoy The Walking Dead for what it is, don’t stew on what it isn’t.

With that being said, a few takeaways from “Too Far Gone”…

A zombie literally rose from the dead. Literally. See, The Walking Dead is not a subtle show.

The Daughters of Carol really came into their own here, shooting and killing another Attractive White Female, which it should be noted, the show doesn’t really have. Unless…is Maggie the Token Attractive Female Lead? Really? But yeah, the kids…Viva la Carol! She may be gone, but she’s not forgotten. Her short-haired legacy lives on. Have we seen the last of Carol? I doubt it. Does she come back a zombie? Hmm. Going to have to think about that one.

As previously noted, Herschel didn’t just die. Herschel got his head cut off by a samurai sword. You got to think that when the Zombie Apocalypse started, that’s probably not how he thought he’d go. He probably just thought he’d bore himself to death with the sound of his own voice. But a samurai sword? Did not see that one coming.

Rick didn’t see it coming either. Why? Because homeboy was swinging for the fences and really trying to nail his Emmy moment, trying to stop the Governor from taking over the prison. Good speech, but Rick didn’t quite stick the landing, though. Was Matthew Fox really not available to play Rick? I like when Rick cries. His face crinkles up, his whiskers bristle. It’s funny to watch a stick figure try to be human. But I’m being harsh. I’m also being truthful. Andrew Lincoln, you sir are not a very good actor. We can change. Can we, Rick? Really can we? I’m not sold on the idea.

Speaking of actors- I realized while watching “Too Far Gone” that I know maybe three characters’ names on The Walking Dead. Let’s see, Rick, Carl, Daryl, the Governor, Maggie, Glen, Herschel, Michonne and Carol. So nine. Nine characters’ names. Two of those people are dead, one is walking the Earth like Cain in Kung Fu. The Walking Dead has really done a piss poor job introducing new characters. I mean I’m cool with calling characters Cutty from the Cut and D’Angelo and Joe Toye. But I’m not sure they’d be cool with it.

How is that Carl is the only one on the show whose hair grows? He looks like the brown haired cousin of Hansen. No one else’s hair grows, but Carl’s. Is everyone else getting their haircut? Is one person in the prison a barber and cuts everyone’s hair for cigarettes? Is Carl afraid of the barber and that’s why he won’t get his haircut? No. That’s nonsense. Carl isn’t afraid of anything! It’s got to be something else. Maybe we’ll find out later.

I don’t know what her name is- she was the gal who was a cop, who was living in the apartment when the bearded Governor came into their lives. And I think she’s a lesbian and her sister, whose name I also can’t remember or even know at all, was hooking up with the Governor. Either way, that gal- I loved how she was the voice of the skeptical during “Too Far Gone.” Yeah, it is kind of crazy that the Governor lopped off of Herschel’s head with a samurai sword. And yeah, having grenades thrown at you is a pretty freaky thing. It’s like she was the only one who hadn’t drank the crazy town kool-aid of The Walking Dead and like me, was a little, what the eff is going on here? I enjoyed that. It’s nice to have a proxy.

The Governor’s crew are lousy shots.

The Walking Dead returns in February.