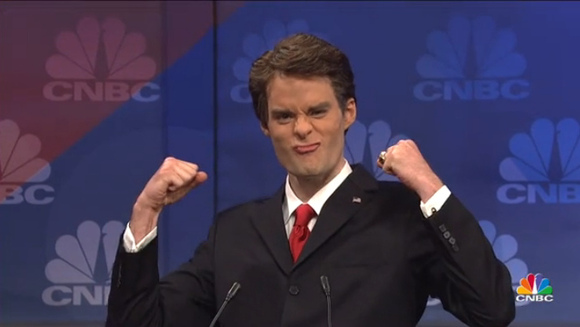 It came out today that Bill Hader is leaving Saturday Night Live. Kind of a major bummer because he’s been one of the more reliable cast members in the past couple years. Personally, I feel that he’s been under-utilized this year, where it seems like he’s been relegated to mostly game show host roles unless it’s Weekend Update spots as James Carville or Stefon.

And speaking of Stefon…


Stefon is always funny. Always. Part of what makes it so funny is that Hader seems on the verge of losing it the entire time. Here’s Hader on The BS Report talking about the origins of Stefon and why he is holding back laughter while he’s out there.
…fists like empanadas…

Because it seems like his duties have shrunk this season, it wasn’t all that big of a surprise that he’s leaving. It makes it no less of a bummer, though, especially because he’ll be taking someone like Herb Welch with him.

Hader did what was almost the impossible on Saturday Night Live, he made fun of Rick Perry, a dude who did most of the damage himself.

That Perry appearance was a bonus, because there’s elements of Hader’s James Carville impression in his tipsy Perry impression.

Hader also appeared in one of this season’s best skits, “Puppet Class,” from the episode hosted by Seth MacFarlane.


I for one wish we had gotten more skits featuring Anthony Peter Coleman.

The news that Hader is leaving comes a few days after it was announced that Seth Meyers would be replacing Jimmy Fallon as host of Late Night. So that’s two big guns leaving the show and the feeling is that Jason Sudeikis and/or Fred Armisen are probably on the way out also in the near future. That’s a lot of talent leaving the show at once. As funny as Bobby Moynihan, Taran Killam and Kate McKinnon are, it’ll be tough for the show to really replace those leaving successfully.

But that’s then and this is now. Now is the time to celebrate Hader’s career at Saturday Night Live. He’ll be missed.

Categories: Television, You Know Who's Awesome