At this point in my life I don’t know everything there is to know- I only know some things. Things you know are absolute- they are facts as far as you are concerned. They are bases of discussion, conversation starters, conversation enders, and possibly points of contention. But ultimately they are simply enough, just the things you know.

1. I know you can’t beat flip flops when it comes to foot wear.

2. I know the Red Sox will always be the team I care about the most, although this has been less rigid in the past couple years- with the Patriots & Celtics sneaking in there.

4. I know the Wire is my favorite television show of all time. Arrested Development is second and the Office (prior to season 7) is third. Notable mentions are Lost, Madmen, Seinfeld and It’s Always Sunny in Philadelphia. In the next couple years I could see Boardwalk Empire and/or Game of Thrones cracking that list.

5. I know the best hat I ever owned was a green fitted Michigan State hat.

6. I know that after a while, you can get sick of drinking only water.

7. I know that the only state not on an ocean I could live in is Colorado.

8. I know the best job I ever had was being a deckhand at Casco Bay Lines.

9. I know I will always look fondly upon Isuzu Troopers.

10. I know I prefer black ink to blue ink, but I’m not entirely sure why.

11. I know that I really came to appreciate the city of Philadelphia.

12. I know my favorite baseball player of all time is Ryne Sandberg.

13. I know that I never thought I’d have a nickname with more staying power than Burns.

14. I know Life cereal will always be the best cereal there is and if you mix it with Honey Nut Cheerios, it’s a work of art.

15. I know beer tastes best in a cold bottle.
16. I know that sporting a handlebar moustache makes me look angry and troubled, regardless of what my mouth is doing.

17. I know the five best concerts I’ve been to are (in no particular order):
– Pearl Jam at the Spectrum in Philly
– My Morning Jacket at the Mann Center in Philly
– Phish’s midnight set on 1/1/00 at Big Cypress Indian Reservation in Florida
– U2 at the old Foxboro Stadium in Mansfield, Mass
– From Good Homes at the Recher Theater in Towson, Maryland

18. I know that life got easier when I stopped caring what everyone else thought.

19. I know that mix tapes are better than mix CD’s. 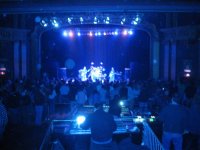 22. I know playing music for people is one of the best feelings there is.
23. I know Goucher College might not be for everybody, but it was for me and I have no regrets.
24. I know I actually do have one regret about Goucher and it’s that I wish I had done a semester abroad. I really wouldn’t have missed as much as I thought I would.

26. I know my favorite place I’ve been to in California is San Diego.

27. I know that someday I want to go to Europe and do the following: fly to London, travel to Ireland and then over to Scotland, then on to Norway & Sweden, followed by taking a boat to Poland, the Czech Republic, Germany, Holland, France, Portugal, Spain and finally taking another boat to Italy. If Greece was included, that’d be dope. But if not, it’s not a deal breaker.

29. I know that for me, coffee just does a job. Taste is secondary.

30. I know Portland, Maine is the greatest place in the world July through October.

31. I know that my next vehicle will be a SUV or a truck. Cars aren’t for me.

32. I know patience isn’t my strong point, but everyday I’m working on it.

33. I know I’m a lucky dude because I met Kim and I had to be lucky for that to happen.

That’s what I know.