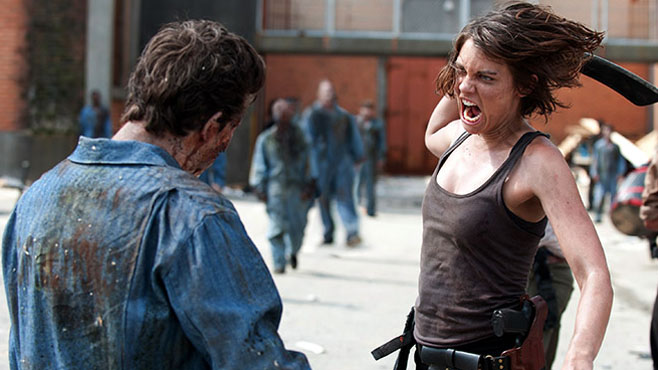 This Sunday The Walking Dead returns from what is unfortunately all the rage now- the mid-season break. When we last left the show, the Governor’s attempt to take over the prison failed, but the prison was torpedoed in the process. Herschel is dead, Carol has been shunned (possibly for becoming too interesting and likeable) and everyone left has skinned out with the intensity of a gaggle of high schoolers fleeing a party broken up by the cops. All that’s left at the prison are empty solo cups in the form of zombies, almost zombies, dead zombies, a tank and wonderful memories of pig farming and planting flowers.

I hope someone kept a scrap book.

And then finally, right before the credits rolled, our bruised & battered, mumbling & grumbling hero Rick, was ferried to safety by his son and blossoming, yet conflicted about it, killing machine, Carl.

So where do we go from here?

Well for starters, Alan Sepinwall from Hitfix.com has already made a case for the show giving Rick a mercy killing. I’m all for this, but we all know this won’t happen. But dude, it’d be sooooo great if it did happen. On a show that is comprised of blank slate, albatross characters- Rick is the absolute cats pajamas when it comes to bland characters. The only drama coming from Rick is generated from his waffling about whether or not he wants to be the leader or not.

But they won’t kill Rick.

Even though they should.

So again, where do we go from here?

Here’s four predictions for the second half of this season…

Prediction number 1: I will learn another character’s name

I wasn’t sad when Herschel died because he died. No. I was sad because he was one of the few characters on the show whose name I knew. With Herschel gone that list is now down to Rick, Carl, Stupid Glenn, Michonne and Daryl. I honestly don’t know anyone else’s name and I’ve seen every episode. Granted I watch part of each episode at 2x fast forward, but not the whole episode. Maggie! That’s another character- Stupid Glenn’s girl friend. Can they introduce a plot where Maggie is grappling with the fact that the Zombie Apocalypse has forced her to date below her weight class? Because let’s be honest, if it weren’t for said Zombie Apocalypse, Stupid Glenn wouldn’t have a chance with her. Perhaps while on their travels, she meets some new dude, causing friction between her and Glenn. Oh, and then maybe Glenn tries to fight this guy. Which could lead to…

I don’t care how. I don’t care why. I just want it to happen. I’d write endless letters to whoever the hell is in charge of the show these days if I thought that would help. What is even the point of Glenn? To whine? To act tough? To be Rick’s right hand man? Well that role is taken…or was taken by Daryl. I think Carl has that job now. But maybe Daryl and Maggie hook up, causing Glenn to fly into a jealous rage and challenge Daryl to a fight. Daryl would be all like- nah man, I ain’t gonna fight you, Glenn. But Glenn will have none of it and keeps challenging him- at one point slapping him across the face and cutting his hand on Daryl’s stubble. Without Rick around to keep the peace or Herschel to dispense any wisdom, shit gets a little hairy and immature and finally Daryl has had enough. Maggie tells him to let him go and hides his cross bow, but Daryl can only stand to be insulted for so long before snapping. And then he snaps, but Glenn runs away. Stupid, weak Glenn. Glenn then returns a few days later. He’s a zombie! How’d he die? Who cares! Daryl wrestles his cross bow away from Maggie and sends an arrow right through Glenn’s head. There is much rejoicing.

We saw what happens when you’re out on the road alone when we saw what the Governor’s travels were like after the destruction of Pleasantville. You ramble around, grow a beard, take someone’s name, befriend a couple strangers in need, find a new crew, quickly take over that crew and then attack a prison. I’m not saying Carol will follow a similar path, but she could. Maybe she meets up with Morgan and they bond. Morgan needs a calming influence. Carol is a calming influence. Then they raise up a society themselves- not by procreation of course- Carol still pines for Daryl and his cross bow. Carol and Morgan set out together and come across a group of disillusioned and scared youngsters in desperate need of guidance. They become a family- like the Brady Bunch, but with knives. Oh shit…maybe they killed Glenn. Carol is putting on a good face, but inside, she’s out for blood, out for revenge on those who cast her out. She won’t rest until she’s destroyed them all. Carol is not to be reckoned with. Take note, Rick. You did this to yourself.

I don’t need to get into this again, but to quickly recap- CARL IS THE ONLY PERSON WHOSE HAIR HAS GROWN! Why is this? Is he afraid of scissors? Are scissors afraid of him? Can his brown locks just not be contained by doomsday scenarios? The reason for this crazy abnormality will be revealed in the coming weeks and it will knock your dirty, crusty, zombie-smelling socks off.

Bonus Prediction: Someone says something about someone’s breath

No really, this will happen. They’d have to have run out of tooth paste by now and pleasantries are going to wear off eventually. It’ll be awkward. I bet Carl’s involved.