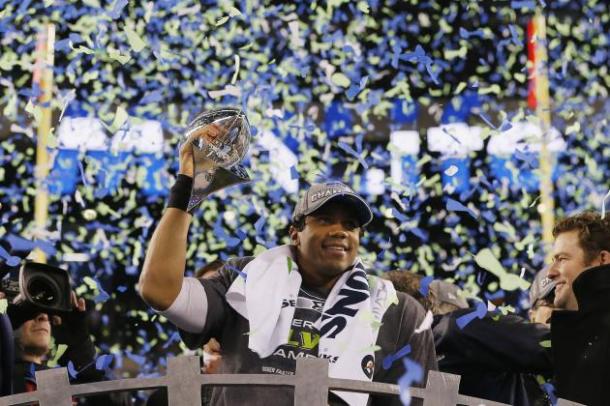 Because I’m home thanks to a snow day…

First off, Twitter is almost too damn hard to keep up with during major events, events like award shows, Presidential speeches and big time sporting events. Tweets are flying at you faster than the Seahawks were flying after Peyton Manning’s passes. There’s really no winner or loser when it comes to Twitter, but there definitely was a Tweet of the Night last night…

It’s so much more fun to watch FOX when it’s someone else being blitzed & sacked! #SuperBowl

Thank you. Thank you on behalf of America. Well, the America who doesn’t watch Fox News. I can’t imagine that America was a big fan of that tweet. Probably not at all.

Now about the Half Time show…

Let’s be honest with ourselves- we were all skeptical, or at the very least, curious about how Bruno Mars would do as this year’s performer. It’s not like he has the gravitas of a Beyonce or U2. Sure he’s popular, but he’s not Paul McCartney or Prince popular. And side note and speaking of Prince, dynamite job on last night’s New Girl. Also a factor, how many super recognizable songs does Mars even have? There’s the song that sounds like a Police song, there’s “Treasure” and there’s that slow one. Other than that? Not sure. It’s probably why the Red Hot Chili Peppers were added at the last minute. They needed one more song. But more on them in a few.

How did Bruno Mars do?


And enjoy that video while it lasts. There’s a good chance it’ll be pulled before I finish this post.

Starting with a good, but kind of weird drum solo, Mars owned the room last night. He played that Song That Sounds Like a Police Song (“Locked Out of Heaven”,) “Treasure” and another uptempo song from his album, Unorthodox Jukebox, “Runaway Baby,” which included a “Shout” call back before spilling into “Give It Away” and the appearance of the Chili Peppers. Mars sang, he danced, he smiled. His backing band might be the best backing band out there today. For a game that at that point, was starting to lack some real excitement, Mars infused some energy into the proceedings and has left me wondering, am I Bruno Mars’ fan now? Fan seems a little strong, a little too committal at this point.

I enjoy Bruno Mars, would see him live- but need to hear a few more songs before making any kind of decision.

As for the Chili Peppers’ appearance- I wrote about it last week, saying that the performance would either rejuvenate their career or cement their current status as “Nostalgia Act” depending on what they played. Well, they played “Give It Away,” arguably their biggest hit, but also a song released over twenty years ago. When they first appeared, I was excited and it was great seeing them out there. I’ll never get sick of “Give It Away.” My Dad wasn’t a fan. Neither was my father in law.  Regardless, I thought they were good. But there was something unsettling about it; something that was kind of sad. Sitting here now, I’m not sure how I feel about it, besides feeling that they either deserved more or should have passed on the gig. Mars was really on a roll when the eight minute mark hit and the Peppers rose from the bowels of Met Life Stadium. To be honest, it was kind of…bummer…no, not a bummer…more of a buzz kill. I was really enjoying Mars’ old-timey soul revue; wasn’t ready for it to be over. But it was and it was retrospective rock ‘n roll time. And that was cool and all. It was. It was and I’m going to keep telling myself that, but deep down, I kind of wish it hadn’t happened. It made the Chili Peppers look small, like a side show. Neither of which I think they are. I mean, were Chad Smith’s drums even mic’d? (UPDATE: no word on Smith’s drums, but the rest of the Peppers weren’t plugged in.)

Giddy Up America’s Commercial of the Night


And I don’t even care for Doritos anymore. You know, because they make your breath stink and make your hands dirty.

So About the Game…

Before the game started and I was asked- who do you want to win? – I’d respond by saying that I’d like to the Seahawks to win, but would be okay with the Broncos winning, ultimately I just wanted a good game. But when that safety happened and my heart jumped and I pumped my fist in the air, it was pretty clear who I really wanted to win- the Seahawks. Because that’s the real test when you’re watching a game between two teams you don’t have an allegiance too- instinctively you’re body makes the decision for you. You can think about it all you want, but once the game starts and without putting an iota of thought into it, you find yourself cheering for one team over the other, the decision has been made.

So I was happy that the Seahawks won- I even wanted a shut out, but old rationale and reasonable Dad talked me down, telling me that a win is a win and not to get greedy. He was right- not about the Chili Peppers, but right about the whole win is a win thing. And win the Seahawks did. They didn’t just beat the Broncos, they flat out demolished them. You can say it was a boring game. But I disagree. Seeing a team play that well, that perfectly- that’s a thing of beauty and because of that, it was entertaining until the very end.

Music to Help You Move On

Snow day. Slow-motion day. Monday. It’s the perfect storm of lethargy. So what better to get you through than some nice & pleasant acoustic roots rock- specifically some acoustic roots rock from Band of Horses? You can hear their new live album, Acoustic at the Ryman, here.  It’s the perfect soundtrack for a Trudging Along Monday spent reading Super Bowl recaps, Chris Christie stories, Phillip Seymour Hoffman remembrances and more. And speaking of Hoffman, rest in peace to one of the best actors of our generation. Maybe now I can find a way to watch The Master.

On to baseball season!

Like Loading...
‹ Giant Helmets, Thug Life & Free Pizza for All!
Shimmy Shimmy Ya: the Moving On Edition ›