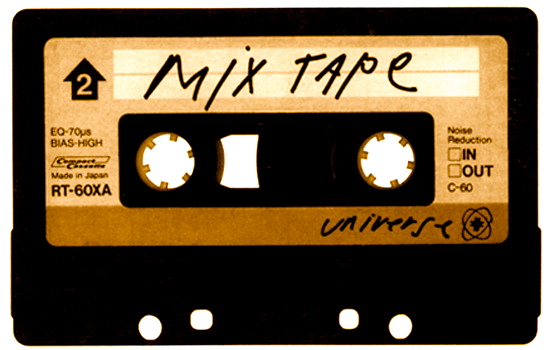 For the most part, they are all gone.

There were probably over a hundred of them. Could of been more, but a lot of them, they had been re-used. White out changed everything.

Not hip hop mix tapes (although there were literally mix tapes made of hip hop,) but straight up mix tapes- collections of songs; a mix of songs on a cassette tape. They were everything from age 10 to age 27. My whole world was based around mix tapes- the playing of them and the making of them. But then one day, just like with the dinosaurs, they were all gone.

Maxwell made solid blank tapes. Ninety minutes was standard, 110 for something special, and 120 for serious business. A block of them- maybe a pack of ten, was consistently one of the most reliable gifts I would recieve in regards to how happy I was to get them. The problem was never filling them. The problem was always what should fill them. Sometimes there were themes or sometimes for someone. Always a treat was taping an album and deciding what to fill the blank space with. Should it be old songs of that band or something that sounded like them; something along the same lines? I don’t remember using fast forward all that much. It was all about pressing play and then pressing eject. When they made walkmen that would flip ’em automatically, it, like White Out and duel tape decks, changed everything.

A favorite reason to make a mix tape was a road trip. It started when I was younger as a passenger and continued up to when I could drive and rocked the Escort to and from Baltimore. This included plane trips; making a mix or two for the plane ride to Florida. One of the most important things I always needed to pack was batteries. If batteries were to go dead, shit went south quick- unless you had back ups. So always remember extra batteries. And always pack one more tape than you think you should, because you never know.

Chris Murton, a friend from high school, made one of my favorite mix tapes; a tape I listened to all through college. It was warm up music for our soccer team that year and was an amazing mix tape made up old school hip hop and funk jams. They were songs Murton had used when he took break-dancing classes at the Y. I don’t remember when I last listened to that mix, but I also never remember taking a trip when I didn’t bring that tape with me.

In the Mix Tape Hall of Fame, Kenny Smith, the Kenny Smith, would be in there. When we came back for sophomore year at Goucher, Kenny came back from his parents’ house in central New Jersey with perhaps what was one of the most impressive collections of mix tapes- in terms of size, scope and attention to detail, I had ever seen. They were all Phish bootlegs. A lot of them. Kenny had spent the summer pumping gas and using the Internet to find bootlegs to trade for. I didn’t know where to start, there were just so many. So many shows and set lists, that I didn’t know how to pick one to listen too. But Kenny did. Impressively. He was like a librarian presiding over his own collection. He could match any mood or social setting with a set- frequently in less than five minutes. During those five minutes, I’d be playing Murton’s Soccer mix tape.

Mix tapes, as I got older, became like scrapbooks and were retrospectively, very revealing and informational. I could follow relationships through what songs were on mixes and what bands had creeped in. I could see moods and speculate what was going in my life at the time of a certain mix’s creating. Thinking back, the last times tapes were regularly in my life was when I lived up on the Eastern Prom in Portland with Obie and we used them in the bathroom for the Bathroom Boombox. The Bathroom Boombox, like mix tapes, was an essential part of every bathroom I regularly used until I moved to Philadelphia. Regardless of whose it was, the Bathroom Boombox was old, large, and had small splotches of paint on it. For my Bathroom Boombox, it was replaced by Bathroom Clock Radio and with that change, mix tapes all put disappeared. They either didn’t survive the move off the Prom or didn’t survive Mom’s purging of the basement.

During those last few years in Portland, mix tapes were ushered out of existence by the progress of buring CD’s. Soon mix tapes were all but completely replaced by mix CD’s. For the most part, this was a good change. It made it easier and tape decks were becoming obsolete. Especially when I was playing with Sidecar, the burned CD became a major staple in all of our lives. We were constantly buring CD’s; something to give away at shows. Put labels on ’em and they’d almost look professional. I-tunes came along and like the automatic side-changer on Walkmens before it, was a game changer. It made playlists easier to create, no scrap paper was needed anymore and mistakes easily fixed. And as a bonus, it was incredibly faster to burn a mix CD than to record a mix tape. I’m not a scientist. I don’t know the ratio or percentage of how faster it was. I’m sorry. But you can see and probably know, it was faster.

But in some cases, the magic was gone. It was gone for a simple reason: skip. Skip was the new fast forward. Part of the magic and soul of mix tapes was the construction of them, the order of the songs. It was meant to be seen as whole. Mix CD’s lost that because skip made it so easy to miss a song or two; ruining the intended flow of a mix. The hope that the mix would be listened to every time from start to finish faded fast. Burned CD’s were shorter, easier to make, and slightly cooler looking and like raccoons replacing dinosaurs, they moved right in and took over the game.

You are gone, but not forgotten.