Home › Television › Breaking Down The Suspects On ‘Mare of Easttown’

Breaking Down The Suspects On ‘Mare of Easttown’

HBO’s excellent new limited series Mare of Easttown pulled a fast one on us. They got us hooked with a dead body in a creek. Who doesn’t love a good murder mystery? Plus there was a missing girl from a year earlier too and you know what that means, right? Potential serial killer. So for all intents and purposes, we started watching Mare of Easttown under the impression that we were watching a show about cops looking for the killer of local gals.

But then along the way, things shifted and in addition to a murder mystery, we also got a kidnapping mystery. Just like with Yuenglings, two mysteries are better than one.

There was the original case, the one involving Erin’s killer, and then there was a separate case involving someone snatching up hookers and unbeknownst to local law enforcement, stashing them away in an old bar. Were the cases connected? Maybe. But no. But possibly, but not directly. Hard to say. Final answer- kind of.

It did seem though as if the paths of both cases had started divulging and in the latest episode, “Illusions,” that was confirmed when Mare and our dearly departed and beloved Detective Zabel cracked the missing girls case. In hindsight, someone probably should have been looking at the old, abandoned bar in town. Easttown doesn’t seem like the kind of place that would have a bar that wasn’t acting as a bar. Something shady had to be going on there.

Yet while two of the missing woman have now been rescued and that case closed, the case of who killed young Erin took a few new turns. So now we’re back to where we started, wondering who killed Erin.

Barring any new suspects, which is definitely a possibility seeing as how the show has introduced a new one each week and there are still two episodes left, here is a ranking of the suspects that we know, ranked from least likely to totally effin’ likely.

Roy from ‘The Office’

Mare’s ex-husband definitely had more than just a normal teacher/student relationship with Erin, something that he claimed initially when Mare asked him about it. But despite us thinking something nefarious was afoot, that was not the case as he was apparently just helping her with diapers, which is honestly a pretty admirable thing to do. Diapers are incredibly expensive. And you need a lot of them. It’s a racket if I’m being honest with you.

But we do have to question Roy from The Office’s judgment if only because who the hell buys a house directly behind their ex’s house? Was there nothing else available in sunny Easttown, Roy from The Office? Come on, man. If you want to be near your kids, you could at least look for something a street or two. No shame in that, but there is some judging from yours truly with setting up shop directly behind your former wife’s house.

Man, talk about shitty timing on my part. At the start of “Illusions,” I may or may not have said something to my wife that Uncle Big Beard “seems like a good dude.” I like his beard and I bet he’d be a good hang.

Of course, then it’s revealed that not only is he cheating on his wife, who is fantastic by the way, but he’s also guilting his son into keeping the whole thing under wraps. I would like to take this time to retract my statement about him seeming like a good dude because he is not a good dude.

But is he so not a good dude that he would kill his niece?

I don’t think so but I also don’t know what other secrets he might be hiding in that beard of his, let alone what woodland creatures and various birds might be residing in there.

Someone We Haven’t Met Yet

Seeing as how we’re getting a new suspect each week, we can’t rule this out. However, typically in a show like this, the killer is usually someone we met very early on. Rules are obviously meant to be broken (within reason of course… I’m looking at you, Mare,) but there’s a lot of history and weight behind this specific rule. Plus, they already kind of skirted the rule already with the kidnapper, who was new to us. I’m not sure they’d do that again.

Guilty of murder? I don’t think so. I believe we can clear Father Dan on that one. But possibly knowing more than he’s letting on? I don’t know if that’s a crime or not but at the very least it’s super shady and ethically dubious.

Part of Father Dan’s problem is our collective unease and distrust with priests in popular culture. Long gone are the days when they are good guys in shows. Now they mostly show up as supervillains in Netflix documentaries. It’s a tough time to be a priest on a television show or in a movie, that’s for damn sure and it’s probably playing into our inability to clear Father Dan of any potential wrongdoing.

Sorry, Father Dan. It’s not you, it’s me. Although it might be you so don’t get comfortable.

So in closing, don’t leave the state, Dylan’s friend.

I threw her bike in the river because I was worried it would look bad that I had it.

Well, you weren’t wrong, Deacon Mark. But chucking it in the river wasn’t a good look either.

Get your shit together, Deacon Mark.

What’s his name? I don’t know. But there’s his brother Big Beard and his other brother Handlebar Mustache and for the most part, his facial hair is pretty boring in comparison. And he also had been pretty boring in comparison until he got super sketchy when the subject of Erin living with him came up. Like, super sketchy. He looked like my daughter when she has to go to the bathroom but won’t admit it- fidgety, squirmy, moving around a lot. Damn it, girl, just go. And damn it, Uncle Full Rolling Rock, just admit something because there’s definitely something bothering you and something you don’t want to talk about.

Now, I’d have him higher, but we’re five episodes into this show and so far, each episode has introduced a new suspect and then promptly dismissed that person as a suspect a week later. We shouldn’t overreact here. Instead, we should just like, regular react and admit that getting a fresh beer and then bailing after one sip because you have someplace to be isn’t a good look, not to mention a waste of one of Mare’s beloved Rolling Rocks.

In Easttown, wasting a cold Rolling Rock gets you 3-5 and a year of community service.

Initially, Dylan looked guilty. Then for a spell there, Dylan didn’t look guilty and you actually kind of felt bad for him a bit. Of course, then he contemplated killing Erin’s baby with a pillow and even though he didn’t, you don’t forget someone even considering such a God-awful move. Dylan might not have killed Erin but we should be clear that Dylan is not someone to feel sorry for.

But then Dylan got out of the hospital and back home and oh yeah, Dylan looks super guilty. Now he actually looks more guilty, which is kind of impressive. Demonstrates growth. Good for you, Dylan.

Yeah, maybe. They’re demons and a dark side, two things that don’t really have different levels to them. You either have demons and a dark side or you don’t and Dylan does. Pretty simple. I would say there is a 74% chance Dylan killed Erin or at the very least, knows who did because while he might not have pulled the trigger, he was somehow involved.

And now we have to ask, if not Dylan, then who? 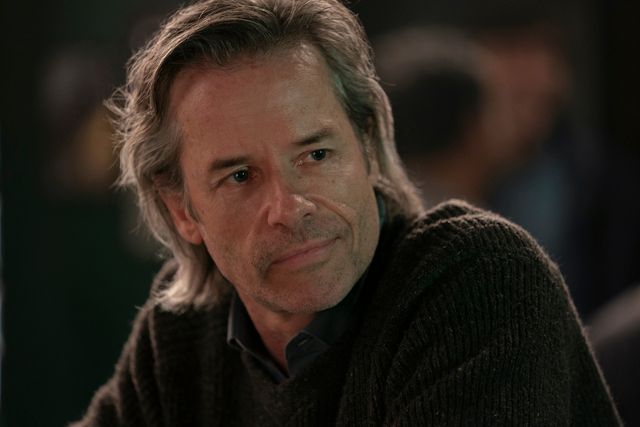 Ah yes, Richard, the writer. Richard the Writer, played by Guy Pearce, someone who is big enough of an actor to not take a seemingly minor part like Richard without there being some kind of payoff in the end. Guy Pearce isn’t spending a few weeks in lovely DelCo unless Guy Pearce gets to play a part with some meat on the bones and so far, there’s not a lot of meat there with the Richard role. But if Richard ends up being the one who killed Erin, then that’s a different story.

Casting aside, there’s something shady about Richard. It’s hard to put my finger on it.

Oh, wait, no it isn’t. His whole vibe is shady. Homeboy just kind of parachutes in here, having written one successful book that has led him down the lucrative path of teaching a creative writing class at a small southeastern Pennsylvania college with a failed marriage under his belt to boot. You could think he might have some resentment with how things played out for him, not to mention a bloated sense of his own worth, the kind of distorted reality that could lead him to seduce a young local gal who then maybe gets too attached and he can’t have that because Richard the Writer is a free-wheeling dude with an aversion to attachments since his marriage ended.

Is that enough of a reason to kill Erin, though? That seems like a stretch and for this prophecy to be fulfilled, we would need another shoe to drop. But at this point, I’m watching you, Richard. I don’t trust you, Richard. I want you to know that.

Until we meet again, Richard.

Like Loading...
‹ The Black Keys Albums Ranked
For Wes Anderson, All Roads Lead Back To ‘Bottle Rocket’ ›