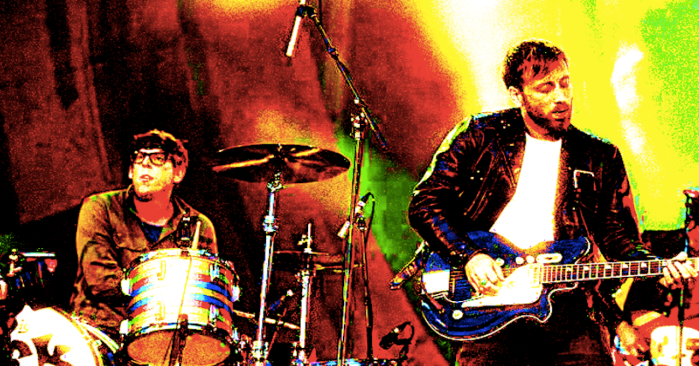 There was a time there where it looked as if we had seen the last of the Black Keys. In 2015, following the release of Turn Blue and capping off another year of extensive touring, the duo went on an extended hiatus. A hiatus is nothing new; pretty common actually, especially for bands that had been around for a while but it quickly became apparent that neither Dan Auerbach nor Patrick Carney would be taking it easy during their break. In fact, both dudes were so productive during the hiatus that it led to some speculation that the hiatus would be extended to the point of being indefinite.

Or in other words, forever.

That speculation was a prisoner of the moment though and it failed to fully grasp the history Auerbach and Carney shared. These weren’t two dudes who had simply come together randomly later in their life. It was just the opposite. They had been friends since childhood, friends who had learned to be musicians together, learned to be a band together and had spent hours upon hours traveling the country together. There was a bond there and with that in mind, a reconciliation was all but inevitable. No matter what paths they took while separated, eventually, Auerbach and Carney would find their way back to each other.

In early 2019, reports started coming out that the hiatus was over and the band was working on new material. In March they released “Lo/Hi,” the first new material they had put out since 2015. This was followed by the release of their ninth album, Let’s Rock in May. Let’s Rock lives up to its title and came with a grittiness and rawness that was much more in line with the duo’s earlier material than Turn Blue.

The band’s return, like so much else, was eventually derailed by COVID but the band wasn’t idle while hunkered down in quarantine. On Friday, they released Delta Kream, which was recorded at Auerbach’s Easy Eye Studio in Nashville. The new album is comprised of blues covers that the band has said were hugely influential for them and their sound, especially when they were first starting out. Delta Kream features songs by blues legends such as John Lee Hooker, R. L. Burnside, Junior Kimbrough, and Big Joe Williams.

The connection that Delta Kream provides with the band’s earlier albums makes it seem like a damn near perfect time to take stock of the band’s catalog. You can also check out a playlist of the band’s 40 best songs here.

In the run-up to Magic Potion, the Black Keys had finally elected to start licensing some of their music and had signed with Nonesuch Records. Yet despite finally having some money in their pocket, the band returned to Carney’s basement studio, where they had recorded their first few albums. Magic Potion is the band’s first album comprised entirely of original material, yet when the album was released, there was some initial pushback. The thought was that the album’s sound seemed like a step back for the band, a reverse in course from the changes they had introduced to their sound with Rubber Factory. But it’s hard to complain when Magic Potion is a return to the no-nonsense, blues rock that the Keys had first started playing.

Turn Blue isn’t a bad album by any means, but it does sound like the product of a band that is a little worse for wear, a little tuckered out. And that’s understandable as they were coming off the release of El Camino and the touring that followed. On Turn Blue, they teamed up with Danger Mouse again, and the result is a sprawling, smooth and ambitious album that adds desert, California rock and spaced-out jams to the band’s toolbox. Ultimately there is a lack of urgency and eff youness to the album, two things that had been front and center in everything the band had done up to that point.

The band had been picking up fans left and right over the course of their first few years together, with one of them being Damon Dash, the founder of Roc-A-Fella Records. Dash reportedly claimed the Keys had become his favorite band and after meeting them, made plans to have them spend some time in a New York City studio with rapper Jim Jones. Over the course of 11 weeks, other rappers including Mos Def, members of Wu-Tang Clan, Q-Tip, Pharoahe Monch, and others joined in, adding vocals to what would eventually become Blakroc, an album Auerbach said that “Pat and I have been preparing for since we were 16.”

The Black Keys’ second album and first on Fat Possum was recorded in one 14-hour session down in Carney’s basement. It was the band’s second attempt at recording their follow-up, with the original recordings being scrapped because Auerbach and Carney felt that they sounded too commercial. So they went in the opposite direction on the second try with Thickfreakness sounding dirty and raw, a mix of originals and blues covers that would prove to be a useful glimpse into the band’s potential and future.

If Turn Blue was a lazy Saturday afternoon, Let’s Rock is the wild Friday night that proceeded it. There’s a freshness to the album that is obviously the result of some time apart as the album has a fun “getting the band back together” vibe to it. Whereas Turn Blue takes its time and makes a point of stretching its legs, Lets Rock isn’t game to waste any time and mess around with professional courtesy. It’s a jackhammer of a rock record and the band makes a point of letting people know that when it comes down to it, there are few better out there when it comes to hammering out blues/garage rock.

When doing a ranking like this, an act’s debut album typically ends up in one of two places. It either lands around the number two spot or it finds itself in the middle of the pack, which is where The Big Come Up resides comfortably. There are better Black Keys’ albums (specifically four of them,) but there aren’t many that are more important. The Big Come Up is like a mission statement for the band, outlining everything they intended to do in the years ahead, whether it was melt your face with big rock guitar riffs, rumble your soul with the blues or dig into your earholes with easily digestible, endlessly endearing melodies.

Attack & Release is the first Keys’ album to be helmed by someone outside the band. Danger Mouse had recruited the band to write some songs for an Ike Turner album he was producing but when Turner died in late 2007, the Keys kept the songs for themselves and asked Danger Mouse to help them produce them. Recording in a legit studio for the first time and with a producer, Attack & Release has a markedly different vibe to it than the albums that came before it. The songs alternate between souped-up garage rock and dirty R&B and the addition of Danger Mouse seemed to have breathed some new life into the band. Keys’ purists might have scoffed at the album at the time but it’s short-sighted to think the band could have existed as a two-man operation recording in the drummer’s basement for much longer. Danger Mouse gave them room to grow without stepping on their toes, something we would chalk up as a win/win situation.

Rubber Factory, the band’s third album, is the one where they started to start to close the gap between the band they had been and the one they wanted to be. Exiled from Carney’s basement studio, the band set up shop in an abandoned factory, recording there for a couple months in 2004. The field of young, hungry rock bands was getting crowded in 2004 with The Strokes, The White Stripes, The Yeah Yeah Yeahs and others making noise, and if the Keys wanted to keep up, they needed a rock solid album, which is exactly what Rubber Factory is.

The Keys broke through with 2010’s Brothers and then doubled down with El Camino, an album that elevated them to headliner status and helped them assume the title of Biggest Rock Band in the Land. From a sound standpoint, El Camino sounds like all of their early albums after having spent some time in college, coming out more refined and polished. The grit of the Keys is still there, but it’s balanced out again by Danger Mouse’s production. Whereas Brothers is murky and muddy, El Camino is bright and light, a nice counter to the excellent 2010 album. There’s a seriousness and intention to Brothers that isn’t as apparent on El Camino and it seems to suit them better, allowing them to have fun experimenting with new sounds and instruments.

Brothers narrowly edges out El Camino and Rubber Factory to claim the top spot mainly because of how interesting and dense the album is. To record the album, the band again ventured out of the comfort zone, heading south to record at Muscle Shoals Sound Studios in Alabama. The environment helped shape the album’s sound, a southern, swampy mixture of blues, R&B, and garage rock. The band also tightens up the reins, temporarily shelving their free-wheeling nature for a more subdued, controlled vibe. Ultimately, a wilder version of The Black Keys might be better and more sustainable, but if anything, that makes the achievement of Brothers that much more impressive.