From the outside looking in, McMafia is somewhat of a ridiculous name for a show. Unless it was a comedy. If the show was a comedy, the name would be perfect. But McMafia is not a comedy. I’ve watched three episodes and haven’t laughed once. McMafia is a drama involving Russian crime organizations, financial trading, jet-setting around Europe and parts of the middle east and the joy of feeding ducks. There is not much humor to be found here, thus McMafia is a slightly misleading name for a television show.

Yet however, if you dig a little deeper, the name of the show makes perfect sense. You need to do a little research though.

The term McMafia comes from Misha Glenny’s non-fiction book McMafia: A Journey Through the Global Criminal Underworld. Glenny’s book dives into a new international world of organized crime, one in which certain criminal organizations, notably Chechen syndicates, are essentially franchising their criminal exploits, doing so in a similar fashion as a joint like McDonalds might do. So while the term McMafia sounds almost laughable, in actuality, it’s pretty clever term for a very real phenomenon, one that is depicted in the show McMafia, which again, is in no ways a comedy.

McMafia, which premiered on the BBC in January and then over here in America on AMC in late February, looks, smells and sounds like AMC’s last international thriller venture, The Night Manager, a limited* series about arms dealing that was based on a John le Carre novel. The show proved so successful that not only did it win awards, it has been brought back for a second season because we just can’t leave well enough alone.

Listen everyone, if we’re going to keep making these dope limited series, we need to accept that they are limited, which is part of the appeal of them. If every time a limited series gets run out there and is lucky enough to be successful, it’s quickly renewed for a second season, you’re going to lose the privilege of being able to label something a limited series. Looking at you too HBO.

McMafia and The Night Manager are brothers from another mother in that they’re both pulled from source material, feature a British dude in the lead role and take place in a variety of exotic locales. Their paths diverge when it comes to each show’s meat and potatoes though. The Night Manager was largely British in it’s scope (even though it took place mostly in Morocco) and as was previously mentioned, centered around international arms dealing, an occupation with a not-so-surprising bevy of fatal shortfalls. It danced around the globe some, but at the same time, felt small and intimate. McMafia is sprawling and racking up plenty of frequent flyer miles. In three episodes we’ve been in London, Prague, Paris, Qatar, Mumbai, Moscow, Tel Aviv, Cairo and the south of France.

We got you souvenirs. They’re in the car.

As with The Night Manager, McMafia mainly revolves around two characters. There’s the wide-eyed younger gentleman, fueled largely by revenge, and an older dude, whose motives are sketchy at best. McMafia has tentacles whereas The Night Manager had mainly a tail and two fins. The show also includes the younger dude’s family and his lady friend, a big bad back in Russia, and a handful of other shady fellas lurking in the dark alleys of the aforementioned cities and countries.

The younger fella in question is Alex Godman. He sounds British, looks British, but he’s Russian. His family was booted from their homeland back in the 1980’s and forced into exile in England, where Alex was raised and educated before polishing off that education over in America. He runs a hedge fund and strives to be as squeaky clean as possible, given the baggage that comes not just with his last name, but his Russian background. Not sure if you read the news at all, but Russians are more often that not up to no good. Alex knows this, knows it could damage his reputation, so he plays by the book as much as humanely possible.

But I don’t want to spoil anything. Just know that Alex’s fingers don’t stay clean for long. That’s not much of a spoiler though. I’m serious. It’s in the description of the show for crying out loud. Plus, you see it coming a mile away.

The Pros of McMafia

Who doesn’t love intrigue? Who doesn’t love wondering if you should trust that person or not, you know, provided it’s not real life? McMafia hides character’s true motives better than an international drug dealer hides the bloodied body of one of your adversaries. Of course this could be due in large part to the language barrier, but oh well. That kind of makes it cooler.

I would love to go to Prague, but I also don’t see myself going there anytime soon. Thankfully McMafia has gone there for me. Looks delightful.

It’s fun seeing a character who starts out on the right side of the law and life eventually get pulled over to the wrong side. Again, provided it’s not in real life. From the jump we know that Adam’s days in society’s good graces are limited, but that doesn’t make his gradual transition towards shady town any less interesting.

The Cons of McMafia

Not going to lie to you, a lot of the character names are tricky and hard to remember. My wife and I have taken to just calling characters That Dude From All Those Other Things and Mexico Joe and the Gal Who Was Kidnapped and the Bad Guy. That could just be us, though.

The Actor Who Plays Alex Godman

He’s like, not great. He also definitely doesn’t look either Russian or Jewish, two things he is. I suppose that could be intentional, to show how Westernized he has become. But yeah, it’s a stretch.

Just a little and only in one short paragraph! Through the first three episodes Alex’s girlfriend smiles a lot, to the point where it almost becomes annoying. It reaches a certain point where you would just hope she’s a little quicker on the uptake than that. And Alex’s dad is…well, maybe he’s a little broken of a dude? He also looks nothing like his brother. I also am curious how they make money. No really, Alex’s girl friend smiles a lot. 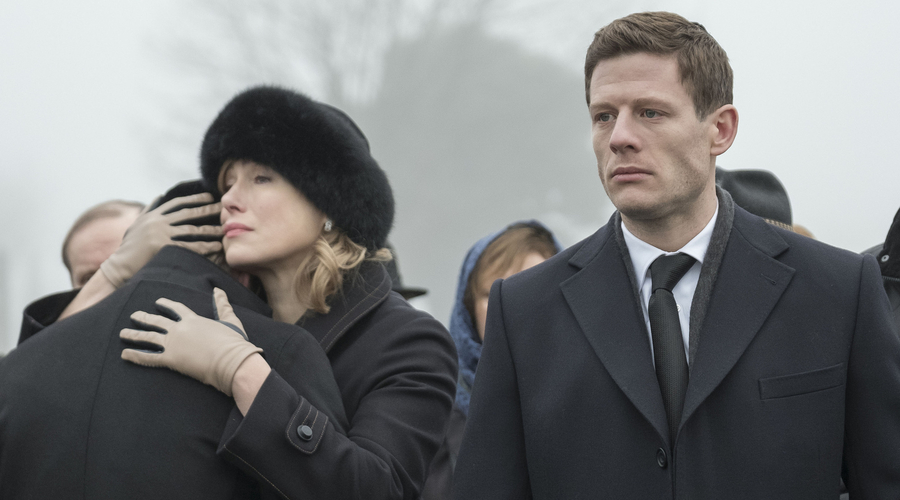 But the Bottom Line…

McMafia is a good show. It’s not great, it’s not even really good. It’s a solid B- or C+. It’s a fun show and that if you wanted to, you wouldn’t have to put much thought into it. You can just roll with it, enjoy the scenery and scarf down the international intrigue. You could learn all the names or you could just kind of recognize the characters. Either way, you’ll have an idea what’s going on.