With the second season of Stranger Things now in the books, it’s time to look back on what was ultimately another fun and enjoyable season. Of course we have some questions, like hey, that giant effin’ upside down monster is still the bad guy, right, and what was the point of Billy, but we’ll save questions for another time.

Let’s track this. Steve was with Nancy, but their relationship was haunted by the whole Barb thing as well as Nancy’s obvious attraction to Jonathan. Nonetheless, Steve persisted, even eating KFC with Barb’s parents because Nancy wanted to and Steve is a heck of a guy with a heck of a head of hair. Then Billy came along, challenged Steve’s apparent ruling of the school (more on that later,) Nancy got hammered and drunk truth-spoke her way into ending her and Steve’s relationship and just when all looked lost for our boy Steve, he somehow gets hooked up with Dustin and just like that, becomes the group’s defacto big brother. Sorry Jonathan, Steve is just cooler. Jonathan is more like the middle brother.

Remember last season, when Steve was the worst?

Yeah, I don’t either because all I remember now is that Steve is the best and I hope he gets into college, finds a nice gal, becomes a mentor to Dustin and goes on to do great things.

Don’t pretend you don’t know who Erica is.

On last week’s episode of Differing Opinions on Drake, Erica was our consensus pick for season two MVP. She ran away with it, wasn’t even a close race.

Dear Duffer Brothers, when it comes time to start putting together season three, don’t sleep on Erica. I repeat: DON’T SLEEP ON ERICA.

Oh, Bob. We barely knew you and you’ll have to forgive us for not totally trusting and/or liking you for at least the first few episodes. We have trust issues. It’s nothing personal. You seemed just too damn good to be true. I liked your idea to run away to Maine. I liked you, Bob. May you sleep with angels, sir.

The Actor Who Plays Will 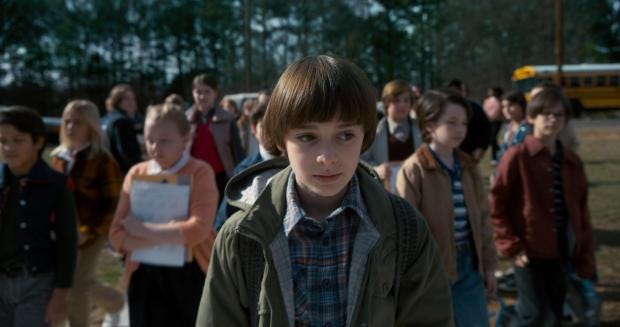 Noah Schnapp continues to draw the short stick on this show. The other dudes, they’re out there riding bikes and running around having Goonies adventures and poor Will, well, he’s a sweaty mess tied to a bed again. Oh but this time it’s his mom yelling at him. Or he’s getting pushed to the ground by bullies. Props to Schnapp for going all in and playing the hell out of Will. You know he’s texting the Duffers daily, suggesting plot ideas for next season, like Will gets a girl friend or Will becomes a life guard or Will JUST GETS TO HANG OUT AND RIDE A BIKE LIKE EVERYONE ELSE.

To which the Duffers respond, “yeah, maybe. talk soon.”

He’s the show’s hero. Plain and simple. Dude’s also a heck of a smooth dancer.

Is it too early to start discussing a Stranger Things spin-off about a young Hopper? Ha, I’m just kidding. That discussion started two episodes into season one.

Because “You Don’t Mess Around With Jim” is a dope song.

This is probably a controversial pick but I’m willing to defend it for like, a minute or so. Maybe not even for that long, but either way, Nancy is a woman who knows what she wants (for the most part) and when push came to shove, had no problem grabbing a rifle and holding down the fort. Her plans aren’t always the best, but we’ll get there.

Nancy, thumbs up from Giddy Up America.

Lucas deftly tackled race relations, got to rock the eye black and camo bandana and in the end, got the girl. If that doesn’t make him a winner, I don’t know what could.

You haven’t heard from either of your older children for God knows how long, your husband is THE WORST, but eff it, you do you Karen. And if you don’t do you, I’m sure we can find someone who would happily do you.

Hey, it’s Billy. What a wonderful way to move on to our losers section.

I’m sorry, what was the point of Billy again? Did we really need a foil for Steve? No, Steve didn’t need Billy to redeem himself and it’s not as if Steve’s redemption tour was at all affected by the presence of Billy. Steve became our favorite by being a good dude to Nancy and not getting the boys killed. So again, why was Billy there? Was it to provide some depth to Max’s character? Okay, but I’m not sure it was mission accomplished there. The show kind of did a disservice to Billy’s character because they never really made him anything more than a stereotype – a fantastic stereotype, but a stereotype nonetheless.

I’m going to assume we’ll get a little more of Billy next season and then things will make a little more sense. Or it’ll mean more Metallica and undercurrents of racism. I guess we’ll have to wait and see.

So Steve was the ruler of the school because he was cool and rich. But apparently Steve’s reign was thrown into question once he got with Nancy. Not totally sure why, but Steve’s relationship with Nancy created an opening for someone to swoop in and seize power, which is what Billy did via the time-honored political strategy of acting like you don’t give a shit about anyone, being pretty okay at basketball in gym class and besting Steve’s record for longest keg stand.

Things were moving so quickly that no one even bothered to question the legitimacy of the keg stand record being broken. Look at that! Steve spit a good bit out and no one cared. They had picked a new ruler, solidified by that dude on Billy’s right switching sides.

With a penchant for slippery allegiances that kid is bound to go far.

Specifically Dustin’s mom’s cat, who Dart ate and whose whereabouts Dustin lied to his mom about to cover up the massacre. Lying to his mom? Another L for Dustin. He might have ended the season on a high note, dancing with Nancy at the Snow Ball, but it was little consolation for a character who spent the season racking up the L’s.

Wait, Bob was a winner, how can he also be a loser? Fair question. Kim felt it was because he died; he literally lost. That’s fair. But I would argue that Bob cops a L here because thanks to his shitty advice about standing up to bullies, Will decided to confront the Upside Down monster and ended up possessed.

A for effort, though. Still bummed you died.

HOW DOES NO ONE IN THIS TOWN BESIDES FIVE KIDS, A COUPLE TEENAGERS, A MOM, BOB AND THE EFFIN’ SHERIFF NOT KNOW THAT THERE’S SOME KIND OF CRAZY SHIT HAPPENING LITERALLY RIGHT UNDER THEIR FEET!!! Learning that there are others like Eleven out there is interesting and helps set up a possible future for the show, so I can understand why the Duffers would want to dig into that. But dedicating a whole episode to it, especially episode seven, right as the action is really starting to ramp up, was a rare miss for the brothers.

Everything about “The Lost Sister” felt off, from the tone to the dialogue to the overuse of 80’s stereotypes. Again, I understand why they wanted to do it, but I think it would have been better if it had happened during episode three or four, before we got too invested in the main action. You can’t end an episode with a pack of mini-demogorgons on the verge of overwhelming the Hawkins Lab and then follow that up with Eleven road-tripping over to Chicago on a vision quest.

Kim thinks that maybe the end result here is that to finally stop the Upside Down monster, all of the numbered X-Men like Eleven will need to band together to stop it. If this is the case, it helps “The Lost Sister” in the long run. But in the short run, a weird episode that was a minor blip in the radar of what was overall a great season.

Like Loading...
‹ 25 Uses for This Great Picture of Jennifer Lawrence
There Are So Many Rappers With Lil in Their Name ›