There are a handful of Giddy Up America-approved, absolutely fail safe bands. These bands are trusted compatriots, worthy fellow travelers and solid partners in crime. They have yet to steer us wrong, yet to release an album that incites doubt, regret or misgivings. We know what we are getting with them and have confidence that they will not let us down. Years pass and this list dwindles (I’m looking at you Red Hot Chili Peppers) and bands who were once infallible become shadows of  their former selves (yeah, talking about you, 311.) Some keep on keeping on though.

With the release of their upcoming album, The Waterfall, I thought I’d focus on one the top tier bands in this group- My Morning Jacket. Oh I love me some My Morning Jacket. Love ’em! One of the best concerts I’ve seen in the past few years was My Morning Jacket in Philly. It was an effin’ rock show in the purest since and I’ve been dying to see them ever since. I recently got turned onto their mega, 4 hour set at Bonnaroo in 2008 and that’s definitely worth checking out. It’s intense, it’s revivalist, it’s balls out rock ‘n roll.

By and large, every My Morning Jacket album is a great album. I haven’t been let down by one yet and The Waterfall is definitely no exception. It’s an amazing album, complete with the wide open rock and down and dirty grooves that make MMJ so much fun and so endlessly entertaining. But where does it rank among My Morning Jacket’s other albums?

Only their main studio albums will be ranked, with the one exception being their live album, Okonokos. Other albums, mostly live & demo compilations won’t be ranked but instead simply categorized as Dude, It’s My Morning Jacket, So Of Course It’s Good. 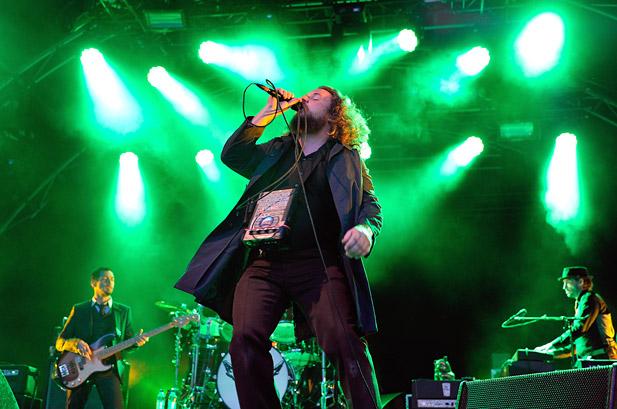 Reason for Ranking: It’s the band’s first album and it sounds like their first album. Not a knock, just the truth. The production is rough and it has the sound of a band trying to find itself, discover it’s sound and learn who it is. I’ve honestly never listened to this album all that much, but I didn’t want to exclude it from the rankings. We all start somewhere. Beginnings always deserve to be acknowledged.

Highlight(s): “If All Else Fails” – a sweet song; sounds more country than anything they’ve done since.

Reason for Ranking: In my mind this is the first real My Morning Jacket album, as it’s the first thing that starts to really sound like the band.

Reason for Ranking: Normally a live album wouldn’t be include in these kinds of rankings, but I think Okonokos is different. If It Still Moves was the first real introduction to My Morning Jacket from a studio standpoint, Okonokos was the first display of their power as a live band. They had released live material before, but this was a true live album- recorded on the band’s tour for the album Z. It covers all of their stops up until that point- it doesn’t just focus on the more polished material from Z. In terms of progression, it’s a good third/fourth step for someone who had gotten into the band via It Still Moves.

Highlight(s): “One Big Holiday,” “Dancefloors,” “It Beats for You,” “Steam Engine”

Reason for Ranking: The band’s stereotypical “veer left” album. On this one they attempted to get away from the big alt-country-tinged rock ‘n roll they had been hocking up to that point and introduce some more R & B leanings. It was definitely mildly jarring upon first listen, but good nonetheless. I feel it gets a bad rap now because when seen within the context of their more developed discography, it seems out of place. But I like that they tried something new and for the most part, are successful in doing so. Some of the songs don’t stand the test of time as others do, but I still think it’s a great album.

Reason for Ranking: The new album is strong, really strong. I wavered between whether or not it or Circuital should be ranked third. Time may change the outcome, The Waterfall is still too new to completely appreciate and I really like Circuital. But that could change as soon as a week from now. It feels more like Z or even a more mature It Still Moves. It’s a reassuring album- nice to know that A) the band still has it and B) aren’t venturing into some other direction as another band at the stage of their career they are in might be prone to do.

Highlight(s): “Big Decisions,” “Compound Fracture,” “In Its Infancy,” “Spring (Among the Living)”

Reason for Ranking: Their first studio album since Evil Urges and it seemed like it had been a while since we had heard from them. Plus, with the last album being the Different Direction On This One album, no one really knew what to expect. It’s a dope album, though. I love how it starts, with the slow, plodding and methodical “Victory Dance.” A lot of these songs sounded great live too.

Highlight(s): “The Day is Coming,” “Holdin On To Black Metal,” “Wonderful,” “First Light”

Reason for Ranking: First and foremost- sentimentality. This was the first MMJ album I heard and subsequently fell in love with. So it’s always going to have a special place in my heart. But even if that weren’t the case, it would be ranked this high because it’s full of a lot of really good songs, songs that have become MMJ classics. I can pull this album out whenever and blast it from start to finish. “Dancefloors” will not just always be one of my favorite MMJ songs, but that and “Easy Morning Rebels,” two of my favorite Shit Kickin’ Rock songs.

Reason for Ranking: If you wanted to get into My Morning Jacket and were looking for an entry point, I’d suggest Z. It’s the band’s most complete album and most accessible. I also think it’s their truest album, in that it captures all the different musical elements the band has to offer. They rock big, they groove, they go soft when needed. It really is an impressive album.

The Waterfall comes out May 4th.