Trump & The Thumbs Up Conundrum

In what seems like record time, the current President of the United States has recklessly set fire to a number of bedrock institutions and norms. You wanted an unconventional President, Part of America. How’s that going for you? Oh, you only watch Fox News? Well then. You probably think everything is fine. Must be nice.

But whether it’s America’s place in the world, the role of government in our country or general rules and practices, either official or long since agreed upon, Trump has laid waste to practically all of them. Now the majority of this American carnage has been covered rather extensively by the media, so I’m here to call attention to a crucial part of our life that has also suffered greatly and been torn to shreds by our current President.

Yes, the thumbs up.

Trump has destroyed the gesture. He’s over-used it, he’s co-opted it, he’s bestowed it among his surrogates and supporters with such frequency that it seems to be available on the same sales rack as a Make America Great Again hat (now available in pink for Mother’s Day!) Give it time. He’ll attempt to copyright it soon enough – if he hasn’t already. Who are we kidding? He totally has. He probably has Chris Christie in charge of it.

There was a time, a time before Trump was President, when the thumbs up was a harmless gesture. It denoted a good job, a good time, a good to go from the runway.

The thumbs up has a history, one that goes back centuries, so far back that the origins of the thumbs up are up for debate. In Europe, in the late Middle Ages, “the ‘thumbs up’ was a signal from English archers preparing for battle that all is well with their bow and they are ready to fight.” Later on, the thumbs up came to be used on a regular basis in business transactions, a signal that everything was good with a deal.

Thanks to Gladiator, a lot of people might think the thumbs up got it’s start in Ancient Rome, with it being used to show whether or not a gladiator had earned the right to live or die. Sure this can be disputed, but no one can dispute that Gladiator is an amazing movie. So by the transitive property of awesome, we’ll give it to them – both the movie and people who believe the thumbs up was used in Ancient Rome as a result of watching the movie. Yes, we’re giving this belief a thumbs up.

It’s not all positive Yelp reviews for the thumbs up, though. Believe it or not, there are parts of the world where the thumbs up isn’t a a good thing. It’s just the opposite actually. I personally learned of this mind-bender when I was in Greece. I’ve been an avid dispatcher of thumbs ups for a while and if memory serves correctly, I think it became a staple for me while in college. It was kind of my thing, so much so that one Halloween a gal who was a friend of mine dressed up as me and in numerous pictures, she’s flashing thumbs ups, as it was the best way to show people who she was. People got it. Burns liked himself a thumbs up (see: Exhibit A.)

I went to Greece for a few weeks during the summer between junior and senior year and as to be expected, I was throwing around thumbs ups everywhere I went. Fanta from a street vendor? Thumbs up! Shot of Ouzo from a bartender? Thumbs up! Crossing a street in Athens without getting killed? Thumbs up! Those are just the examples I can remember. I don’t doubt that there were more. In fact, I know there are more, but it’s just like trying to remember how many stray dogs I befriended when I was there – too many to accurately report back all of these years later.

Here’s the thing though, the thumbs up in Greece? It’s not a good thing. About three days into our trip, our guide saw me give someone a thumbs up and rushed over to stop me. She then quickly let me know that in Greece, as well as some parts of Italy and Africa and South America, the thumbs up is basically their version of a middle finger. Here I was, trying to be a good-time having American traveler, looking to show my pleasure with the world around me, and instead I was telling people to eff off. Crisis averted. God, I would have hated to be the reason why people in other countries hate Americans.

Undeterred however, I kept on trucking with the thumbs up acting as my go-to move for the next decade or so. I taught nieces and nephews how to do them; I recently taught my daughter how to do one and dude, it’s flippin’ adorable. She was giving me a thumbs up yesterday as she watched me mow the lawn. Precious. Even around my workplace, the thumbs up is my thing. On top of that, I use the thumbs up emoji on nearly daily basis in text messages. It’s been a Godsend to be honest with you.

But that was then and this is now. This is the moment when I declare that I’m swearing off of the thumbs up. I’m done with them.

Look at this picture:

How could I do something that would in some way, associate myself with these heartless ass clowns? It was bad enough when it was just Trump doling out stumpy thumbs up, but now it’s become “his thing.”

In January, American Majority, an organization that trains Conservatives when it comes to campaigning, released a “Test Booklet,” an instructional guide for would-be Republican candidates and current Republican lawmakers who would be seeking re-election in 2018 and 2020. Based on analysis conducted during the 2016 Presidential campaign, one of the things Republicans were encouraged to do going forward was rock as many thumbs up as possible, a move that drew consistent favorable reactions from voters.

“This was a theme for the RNC (Republican National Committee) last year — thumbs-up pictures of Trump were the most effective,” American Majority write. “In some cases, it increased per-visit revenue by 30 cents to 40 cents over other images! The next time you send your donors to a splash page for donating or signing up, try using an image of the candidate with their thumbs up — and definitely smiling! Maybe your candidate has a different ‘signature look.’ Use images that make your candidate look the most appealing and positive to a website visitor.”

It’s not fair that Trump gets to claim the thumbs up as his own. And it’s definitely not cool that the thumbs up is becoming a “signature look” for Republicans. The thumbs up should belong to everyone. And for centuries it did, whether it was signing off on a fair sale of melons or sparing a man’s life before a blood-thirsty throng.

That’s part of the problem with Trump – for better or worse, he dominates, he overshadows, he infests. He became the cliched face of wealth and excess in the 80’s because he epitomized it so incredibly well and thanks in large part to The Apprentice, he became associated with business success and savvy over the past decade or so, despite evidence stating the opposite, or at the very least, poking holes in that image. Part of the reason for why he became President was because he became the physical embodiment of white vengeance and anger. Trump is a vessel, a living version of the gaudy buildings around the world that he so enjoys plastering his name all over. Buildings are ultimately empty structures that are eventually filled, emptied and filled again. Just like Trump. His beliefs are tenants on a month-by-month lease. They never stay around long.

The thumbs up is just part of his act, part of him playing the role of President. Once he burns everything around him and he moves on, he’ll have a different move, a different gesture and a different look. The thumbs up will be a thing of the past, yet forever tarnished by his exploitation of it. You know, probably just like America will be.

So now what do I do? Do I hold fast, ditching the thumbs up even though I’ve been using it for longer than he has? Or do I stick to my guns and continue to use the thumbs up as I have for years? I can’t decide. Yesterday I was all about cutting the cord. A few paragraphs ago I was all set to move on. But today? Shit man, I don’t think I can do it, I don’t think I can straight up abandon the thumbs up. It’s been so good to me over the years. We’ve had a lot of fun, made a ton of great memories and displayed endless amounts of joy and appreciation. You should have seen my daughter giving me the thumbs up yesterday. IT WAS ADORABLE!

Should I really let Trump ruin that for me?

The association between Trump and the New England Patriots, my favorite football team, has become well known. He chums around with the team’s owner, receives complimentary letters from the coach and considers the quarterback a good friend. Every time a story would emerge connecting the team and the President, it couldn’t go away fast enough. It was a stain that wouldn’t come out, no matter how hard you scrubbed and washed it. 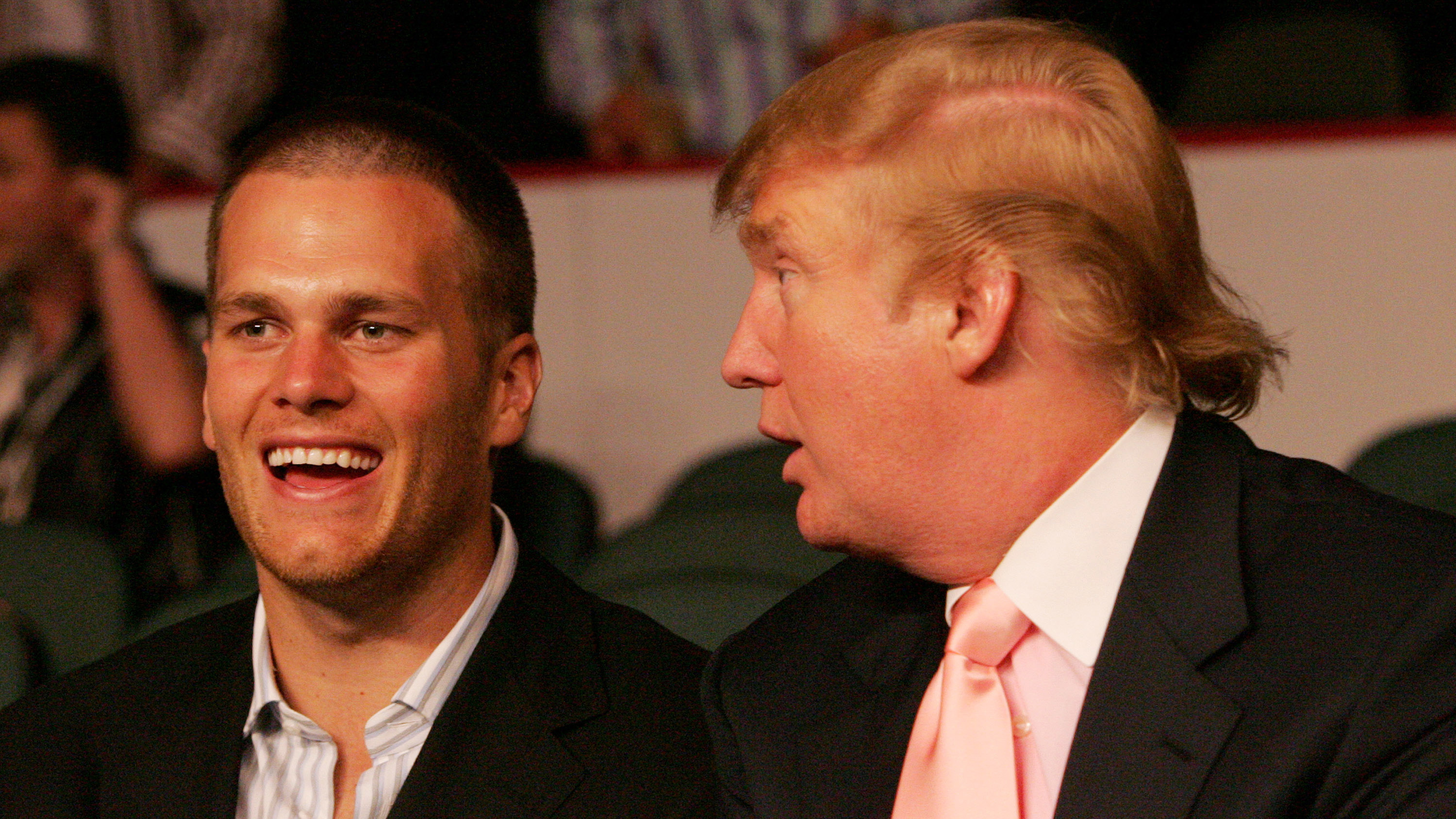 The reality was that as fans of the Pats, we were just going to have to live with it. My sister really struggled with it, and at one point, she was strongly considering ditching our beloved Patriots. I was able to talk her off the ledge though, stressing that Trump has already ruined everything. We can’t let him ruin something we love so much. We will root for the Pats in spite of the association, in spite of what it might imply, in spite of their owner and coach seemingly endorsing the hate and fear-mongering Trump brought with him.

Trump can’t be allowed to make everything terrible.

And it’s with this in mind that I’ve decided to stick with the thumbs up.

I’m not sure how good I feel about it or how strongly I feel. I don’t even know how long this will last. But man, there needs to be some joy in Mudville. It can’t all be doom and gloom. If I thought Trump was going to last four years, I might think differently. But with each passing day, the idea of impeachment or even resignation (which I consider the more likely of outcomes) gains momentum. I can’t see this lasting much longer. And while I could be wrong, I hope I’m not.

Trump doesn’t own the thumbs up. Neither do Republicans, merchants in the Middle Ages or Roman Emperors. I don’t own it, my daughter doesn’t either. The thumbs up belongs to everyone and everyone is entitled to use it as they see fit.

Making the thumbs up yours, though?

Thumbs down to the Mr. Trump.