When the dust settles on the 2016 Presidential election, there will be a winner. Unfortunately it might not be us, the people. But hey, that’s life. Sometimes you get a basket of lemons and make lemonade and then sometimes you need to say the hell with lemonade and make some strong ass alcohol made out of lemons. Nothing you can do about it, folks.

It’s not news that this election has been a dreadful slogging through the pits and depths of despair. It has. It most definitely has. Actually, the only way we do end up winning on Election Day is if it mercifully comes to an end. Unfortunately that is becoming more and more unlikely because someone (hint: this ass hat) doesn’t seem like the kind of dude to take defeat like a gentleman. But come on, let’s at least hope for the best. It really is all we can do. Well, that or move to Canada. Or Mexico. Or hey, Costa Rica is nice and affordable. Man, don’t sleep on Europe.

Okay, but until that time comes, I think we should try our damnedest to focus on the positives. It’s not as if this election season has been completely devoid of all-stars, MVPs out there making things easier, more tolerable and keeping us informed. I think those people deserve some praise, especially the ones keeping us informed because they’re doing so with pure hate raining down upon them on social media.

So here it is, Giddy Up America’s 2016 Presidential Election All-Stars.

Let’s start with the reporters

Tur has been through a lot. Embedded with the Trump campaign, Tur has been harassed and humiliated, not just by Trump supporters but by Trump himself. She’s battled through and has done so like a pro. I mean, come on, this clip sums up not just Trump’s entire campaign, but Tur’s reporting of it.

Perhaps a sign of something as Trump’s stage collapses.@KatyTurNBC: "…um… anyway…" pic.twitter.com/oK7Wz9vGsF

Steady and unflappable. She didn’t even sign up for the gig of following around Trump, it was an off-hand assignment given to her while visiting the states after being assigned to London. I would think it’d be hard to remain focus, let alone professional, covering some of these Trump rallies, but Tur has made it look easy. She’s definitely one of the big winners of this election.

Nuzzi has been the equivalent of Tur when it comes to covering the Trump campaign via the written word. Her dispatches from Trump rallies mix an even level of snark, shock, awe and disbelief. She’s also proven to be a good follow on Twitter, whether it’s getting into it with Fox News’ Sean Hannity or simply commenting on the sad state of affairs that is the election.

Just good, straight up reporting. She has routinely provided illuminating glimpse’s into the Trump campaign.

Okay, now the best columnist out there… 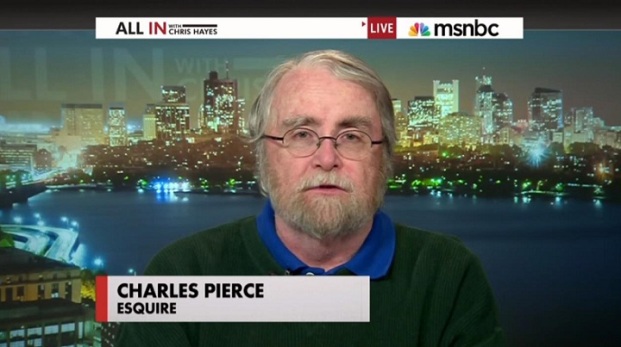 Yes, there are at least fifty quality columnists out there today, doing the lord’s work by laying out quality arguments and making sound cases, but for my money, Pierce is the one to turn to. His writing reads like an older, more exasperated and less drug-fueled Hunter S. Thompson. Two highlights have been his take on President Obama’s speech at this summer’s Democratic National Convention and when he realized Trump doesn’t actually want to be president. Pierce has been able to capture the frustration that is being felt around the country – provided that frustration has nothing to do with possible rigged elections. Yeah, those people might not be as much of a fan.

Pierce also looks like every kid from New England’s one uncle who you find yourself sitting next to at a family reunion and start throwing back Shipyards and talking about the Sox with.

The TV People…the serious ones

Chuck Todd is the one man in America with a goatee that I trust and that says a lot. I even used to rock a goatee and still, I hesitate to trust one who sports one. I trust Chuck Todd, though. I also feel bad for Chuck Todd. He, along with the two other folks in this section really have to put up with a lot. No, it’s not the vile venom being spit at the in-the-field reporters like Tur and Nuzzi. Instead it’s pure nonsense.

These Trump surrogates man, they’re spouting more absurdity than a Samuel Beckett play and poor Chuck Todd has to find a way to deal with, react and then attempt follow-ups. Chuck Todd, you’re the real MVP, sir.

Tapper, like Todd, has been forced to deal with the endless string of buffoonish, non-murderous clowns out there, defending Donald Trump and we can only hope Tapper has a warm blanket and cold beer to come home to after he does so. It’s hard work trying to make sense of the alphabet when the person you are interviewing says it’s A-B-D-C and refuses to believe you when you try and correct them, saying it’s A-B-C-D. Most recently, a Tapper highlight was his handling of Rudy Guiliani following Trump’s comments on the Access Hollywood bus but his greatest hit from the highlight reel of the election he’ll eventually put together was his response to Trump’s announcement that the Birther movement is over.

Tapper spoke the truth in those five minutes. I also think it might have been his breaking point. Homeboy has been a little edgy and less patient since then. Damn it, Trump, YOU BROKE JAKE TAPPER!

And hey, that’s not just random knob job. That dude is a lawyer, meaning that he’s at least relatively intelligent. Says who? Damn good question.

The TV People…the funny ones

On the one hand, you could say the departure of Jon Stewart and Dave Letterman and the retirement of the Stephen Colbert left a void no one could fill when it came to hard-hitting, satirically-drenched commentary. But you could then counter that because of the void, replacements had to be found. Thankfully, they have.

If anyone has assumed the role once occupied by Stewart, it’s Meyers. Meyers just does it with less pent-up rage. But his “Closer Look” segments have become what the first fifteen minutes of Stewart’s version of The Daily Show were, must-watch viewing the morning after they air. I’m sorry, I can’t stay up late enough to watch the show when it’s actually on. Meyers has targeted Trump plenty, but it’s not like he’s ignored Hillary Clinton, it’s just that Trump provides so much effin’ material.

Never more than ten minutes long, the segment is smart, witty and clever as hell. In an age where late night hosts’ success is based largely on their viral relevance, I think this has helped Meyers create a nice little corner for himself.

Now, speaking of The Daily Show, let’s start with someone who is still there.

Klepper is one of the few holdovers from the Stewart area and I think it’s his familiarity that has helped keep him popular and relevant. I also think his, how do you say…uh…whiteness, has helped. No! Not from a viewer stand point, but from an access stand point. Klepper, who does a segment called “Fingers the Pulse” has routinely been able to infiltrate the Trump crowd and the results have been amazing.

And also kind of sad.

But then again, this whole election has been kind of sad.

And then there’s the two vets of The Daily Show…

I would see a clip from Bee’s show here and there, but nothing really grabbed my attention like this one:

It’d be insulting to bring up Bee’s sex when talking about how fresh her voice and her perspective are. I’ll just say her presence, and that of her correspondents, is incredibly refreshing.

Meyers has Jon Stewart’s corner in the sense that he has mastered the restrained, tightly packaged attacks on bullshit and absurdity, but when it comes to pent-up rage, Oliver has it. He also has the boundless terrain that HBO offers and because of that, he’s able to do these wonderful deep dives that are both thoroughly researched and thoroughly hilarious. And while they are all killer, his segment on Trump might be his best.

Oliver’s first season wiped away any lingering doubts about him, but I think his Donald Drumpf bit pushed him over the top and cleared him a space at the big kid’s table.

It’s up there with their casting of Tina Fey as Sarah Palin and set the stage for Alec Baldwin’s portrayal of Trump, which so far has been an improvement on Darrell Hammond’s.

Hosted by four former members of Team Obama, Jon Favrea, Dan Pfeiffer, Jon Lovett and Tommy Vietor, the Keepin’ It 1600 podcast has been a refreshing and relate able take on the election. It’s obviously more entertaining if you’re more inclined to side with Clinton on November 8th, but I think even a Trump supporter, albeit one of the more level-headed ones, would enjoy the pod too.