If the Internet is not talking about Donald effin’ Trump today, the Internet is singing the praises of David Ortiz. Rightfully so. Last night was his last game, capping a season that was essentially a greatest hits tour for Papi. It ended unceremoniously. It ended. It was a bummer.

With some distance between last night’s loss having been traveled, I can at least hang my good ol’ Sox hat on two things.

1.) What happened in the series with the Indians really wasn’t that surprising. In addition to this season’s theme being a swan song for Papi, it was a season plagued by inconsistency, especially when it pertained to the offense. Their offense was a firefighter, except whereas a firefighter typically does one day on, two days off, the Sox offense did one week off, two weeks on. Unfortunately the ALCS fell on their week off.

2.) The Sox look good for the foreseeable future, meaning that the first to worst pattern they’ve fallen into the past couple years might be avoidable in 2017. Yes, Papi will be gone, but they’ll still have all of their young bucks and they’ll still have Dustin Pedroia, David Price and Rick Porcello. They’ll probably try and add a bat to make up for the power they’ll be losing with Ortiz gone, but ultimately the team is in good shape. That’s reassuring.

You know who was reassuring? David Ortiz.

David Ortiz was so reassuring that he was sometimes taken for granted and at times, was looked upon as a sad old dog whose best days might be behind him. We do that to the great ones. It’s not really our fault. It’s human nature. I think we’re incapable of fully appreciating greatness while it’s happening. We need send-offs and goodbye tours and retirement parties and then and only then, are we able to sit back and smile upon the magic we’re witnessing. This definitely goes for sports greatness. We never appreciate sports greatness appropriately. Dude, LeBron James has been great for almost a decade now, but it took him winning a championship for this to be solidified. It’s foolish.

David Ortiz made his mark not in 2004, which is what most people think, but in 2003. It was his first season in Boston, no one really knew anything about him and on paper he was just a back-up first basemen. Of course then he hit over 30 homers and finished 5th in the MVP voting. More importantly, 2003 was right in the middle of a three year window when the Red Sox/Yankees rivalry was at a…wait for it…fever pitch.

Actually, I’m not sure I should have brought that movie up.

No, it’s fine. Part of the reason that movie exists is because in 2003 and 2004, the Red Sox became a cultural phenomenon and that was due in large part to the play of Ortiz. He lifted the Sox up from punch line, second-tier status. He beat the (numerous expletives deleted) Yankees and for the first time in my lifetime, gave Sox fan a leg up on our asshole Yankees’ fans friends because somehow we all have one.

Of course in the years that followed, it was followed by the pink hats and the monetization of damn near everything Sox-related, but whatever, nothing is free, nothing is without downsides.

The Sox won again in 2007, a handful of weeks that in retrospect feel even more dream-like than the 2004 championship campaign. Every Sox fan has their 2004 story, but the 2007 championship already felt like the middle child. And that was before the Sox won in 2013, a championship that seemed to come out of nowhere.

In between those years were some near-misses and some straight up misses.

Three titles in a decade. Do you realize how crazy that is when you take into consideration the painful reality and tragic fact that the Red Sox last title was in 1918? A generation of Sox fans lived without seeing their beloved BoSox win a friggin’ World Series and here we were witnessing three in a span of ten years. 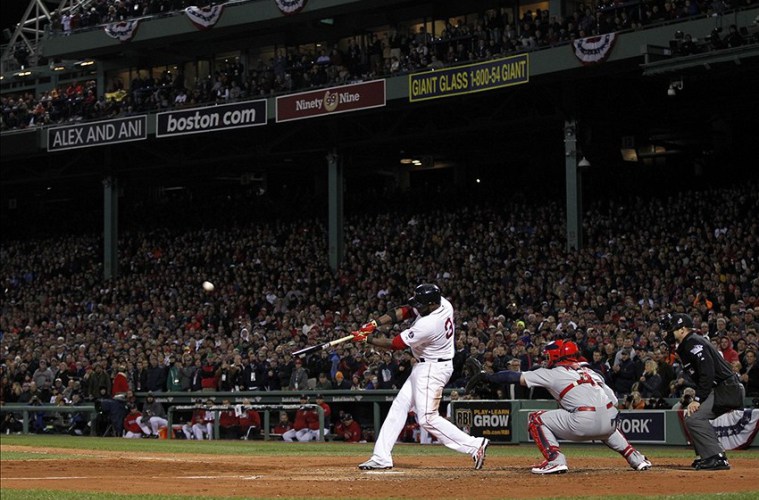 Of course other players contributed to those titles, players like Pedro, Manny, Millar, Napoli, Victorino, Schilling and more. But Ortiz was the constant. He was there for all three. We’ll look back at this era as the Big Papi Era, when the Sox shed curses, monkeys, Yankees, nightmares, cliches and more and in the best way possible became just another baseball team, no longer a team marred by tragedy and pitfalls and downers and punch lines and forks in the road that only lead to either cliffs or dead ends.

The Sox being just another baseball team is why this loss to the Indians kind of makes sense. It’s what baseball teams do – they win some, they lose some. But the majority of teams can lose and their fans can comfort themselves with the not-so distant memory of past success. It’s not life or death. For the Sox in the years before 2004 it was life or death and that was just flat out not healthy. If the Sox had gotten swept by the Indians (or any team for that matter) 15 years ago, I would have been inconsolable. Now I can look ahead, I can rationalize like a grown up. I can say things like, “we just didn’t have it, but things look goooooood for next year.”

And I can say it in a positive light, not with the bitter tinge of the once-popular New England refrain there’s always next year.

I will say that I am bummed that playoff baseball ended so quickly and quietly for the Sox. I was really looking forward to the sleepless nights and stress that comes with a good playoff run. Like a junkie, I had missed it. But alas, it wasn’t meant to be this year. A little more fight would have been nice, but hey, at least they didn’t finish in last place.

With Ortiz around, there was always a bright spot for Sox fans. It’s because he was an icon, it’s because he was great. He was a positive force of light that was able to make the dark not so dark. And sports gets dark. Ask any sports fan; they can tell you. They can give you a story about the deep pits of despair that a sporting event viciously tossed them into without regard for safety or well-being.

Players like David Ortiz rescued fans from those depths. It’s part of what made them great.

The Big Papi Era is over.

It was a lot of fun.