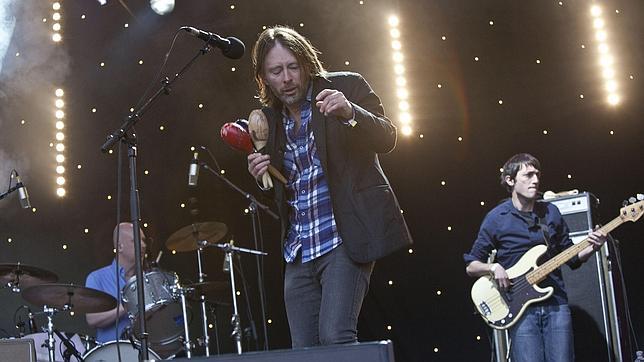 I feel that as you get older you need to start stripping away non-essential things that are in your life. You need to stream-line, son. Your closet shouldn’t be getting fuller as the years go on, it should be getting emptier. I’ve been anti-clutter for the better part of my life, but now as the years have crept up on me, I’ve become a full on clutter adversary. I’m not saying it’s made things easier or better. But I will say it’s at least helped keep my head on straight.

In recent years I’ve kicked things like The Walking Dead, tying my sneakers, expensive razor blades, the amount of frequent buyer cards on my key chain and most condiments to the curb. I don’t need them, don’t want them. They were just taking up space. Now I’ve added one more thing to my listen of stuff I’m tossing out with the weeds and lawn clippings: Radiohead.

As someone who writes about music as a side hustle, I fully realize that disowning Radiohead is borderline blasphemy, but I just have to be honest with myself. I don’t like Radiohead. Definitely not anymore. And thinking about, I’m not sure how much I ever really did. Radiohead has become one of the bands I feel like I’m supposed to like as to one of those bands I actually like and quite frankly, I don’t take kindly to be stuff I’m supposed to like or supposed to do. It’s the Irish in me. Or the French. Or some combination of the two. Either way, I’m calling it quits on my forced fandom of Radiohead.

I’m old enough to remember when “Creep” came out, but also too old to fully remember how much I actually liked it. I suppose I dug it enough, but not enough to actually buy Pablo Honey because the first Radiohead album I remember owning was their next album, The Bends. The Bends is a great album. If Radiohead ever creeps back into my life, it’ll be because I’ve randomly decided to listen to The Bends. On a playlist of Radiohead songs I actually like, The Bends is prominently featured and for good reason- it’s their best album in my opinion. It’s certainly their most accessible. Part of the reason why I’m quitting the band is because I liked them as a rock band and for the better part of the last decade, they haven’t seemed all that interested in being a rock band. Instead they’ve ventured down the ill-fated path of art school, prog rock. I’m not cool with any of those descriptors landing in front of “rock.”

And come on, you can’t tell me with a straight face and clear conscience that you legitimately enjoy the sound of Thom Yorke’s voice. I’ve never heard a banshee wail in pain, but I imagine it sounds like Yorke. I used to like his voice. It used to have more to it than just whimsical wailing. He sounds like he’s in pain. And not like, good, song-writer pain. But actual pain. He might need something removed. Thom Yorke should go to a doctor, not a recording studio.

Yorke’s voice isn’t just a bummer because I cringe when I hear it, but because it takes away from the fact the musically, Radiohead have had some cool moments in the past couple years. They’ve incorporated an afro-beat vibe to their music and that part I like. It’s digital tribal- equal parts TV on the Radio and Antibalas. Yes, it’s a little strange that the second drummer they added looks almost exactly like their new drummer, but I’m not going to get hung up on it. They work well together. Radiohead’s percussion is not the problem here.

But not really, they look like the same effin’ person.

It works, though. The two of them create some of the most interesting and groove-able rhythms out there. It’s just a shame that Yorke is howling like a near-death Dire Wolf through the entire thing. I understand Yorke is kind of the driving force behind the band but I’m of the opinion he’s the driving problem with Radiohead. I also find his dancing to be distracting. And not in a good way. More like, is that guy ok, way. I don’t really want to worry about someone’s well-being when I’m watching a band play. But that tends to be the case with Radiohead.

Radiohead has never been a band for everyone. They are niche, a required taste. The world needs bands like that. We all can’t like the same thing- that’s boring. But I don’t like Radiohead anymore.

And I’m totally okay with it.