The Return of Doom Funk 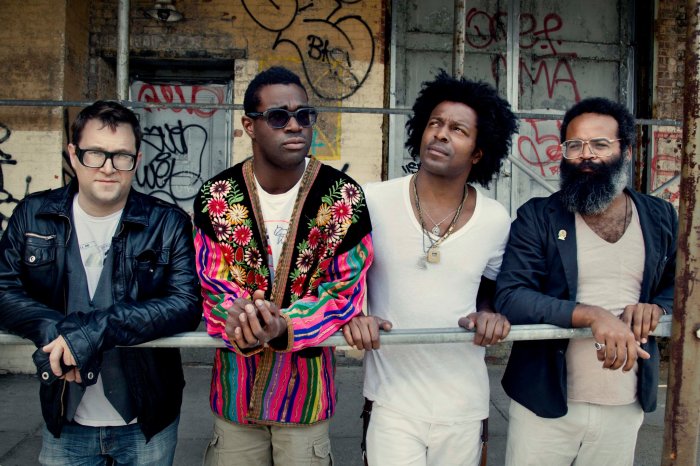 “New Health Rock” was the first TV on the Radio song I ever heard. I feel like it was on a MTV compilation. But I could be wrong about that. I don’t think I am, though. That could just be the bitter, bitter cold inciting that doubt. #globalwarmingmyass

Regardless of where I heard it, I do know and remember fairly clearly that “New Health Rock” was like nothing I had ever heard before. It was grungy and crunchy, yet jamtastic at the same time. It was garage funk- trash can drums, hand claps, and gang land vocals- dance music for the late night/early morning hours.

That song came out in 2003. It was followed by the album Return to Cookie Mountain and full disclosure- I never really got into that album. There didn’t seem to be anything along the same lines of “New Health Rock” I could grab onto. The burned copy of that album lay dormant in my CD book, but “New Health Rock” remained in constant rotation. TV on the Radio remained on the very edges of the bands I liked and listen to and if nothing else, I dug their name.

Then there was that one time I swear, I swear, I say the band eating at Honey’s in Philadelphia one weekday afternoon.

I came across the band’s 2008 album, Dear Science, one of two ways. It was either via my dread-locked friend Drew or via the band’s performance of the song “Dancing Choose” on The Colbert Report. But again, regardless of where or how, I latched onto Dear Science with the fevered intensity of a learned Jaden Smith latching onto “ancient texts.” Dear Science is a really good album- featuring some great songs that seemingly never get old: “Dancing Choose,” “Red Dress,” “Shout Me Out.” I feel and felt it’s the band’s most accessible album, the album I would point to if a wayward traveler asked me to recommend a good starter album for TV on the Radio. Every band that has released at least three albums needs one album to be designated their Safe Access Point Album. For TV on the Radio, Dear Science is that album. The follow-up album, Nine Types of Light, is almost just as good, but lacks the ninja kick of Dear Science. Although that only re-enforces why the two albums are a good one-two punch, a piss and vinegar combination of combustible, garage funk and ethereal, pondering funk.

What would that mean for TV on the Radio’s new album, Seeds, and where would it place in the band’s cannon? Would it continue along the band’s evolutionary path they’ve been on or back track to the distorted weird-ville of pre-Dear Science TV on the Radio? And finally, is it good? And really finally, what the hell does this mean?

These kids are just effin’ with us, right?

Back to TV on the Radio and their new album, Seeds.

It’s definitely not as lively as Dear Science, not as spacey as Nine Types of Light. If anything, it’s a natural next step from both. There are dance grooves- doom dance grooves like “Careful You” and brighter dance grooves like “Happy Idiot.” Both of these songs are wonderful. TV on the Radio continue to be wonderful. The band creates dense and whirling sound scapes that stumble into becoming songs- although, songs defined loosely as songs. Lead singer Tunde Adebimpe’s vocals act as another instrument, dancing above the blips, chips and drones of the instruments compiled below it. The band has obviously been able to step up their game in terms of production, but the general gist of TV on the Radio remains- which is reassuring. They haven’t lost sight of who they are, even though they have tragically lost a founding member, bass player Gerard Smith, who died of cancer shortly after Nine Types of Light‘s release in 2011. The loss of Smith seems to contribute to the ethereal & holistic vibe of Seeds.

Dear Science remains the band’s Safe Access Point Album, but Seeds comes in as a possible alternate. It would depend on how you’d want to introduce the band to someone. If you were inclined to position TV on the Radio as a great art rock, neo-funk band, Dear Science works. If you were more inclined to portray TV on the Radio as a more approachable, relaxed and Brooklyn-ized version of Radiohead, Seeds would work.

TV on the Radio might not be a great band. But they are definitely a worth while band, a worth your time band. They reside somewhere in between good and great, with a few notches on their belt for constant potential and smooth reliability. Seeds is another strong album from them and it doesn’t even include “Mercy,” a single they released last year, which was one of the best Hey Oh! songs of 2013. Admittedly, it wouldn’t have fit on Seeds- but that’s saying something. They can drop a strong single, followed up by a strong album that doesn’t even include said strong single.

Seeds gets 4 stars out of 5. Although that fifth star is on stand by. TV on the Radio’s albums tend to grow on you and Seeds gives off that vibe.

And if you are new to TV on the Radio…

Giddy Up America’s 20 Favorite TV on the Radio Songs