Once upon a time, let’s say over ten years ago, I, as a wide-eyed, young and impressionable college student was dead to rights certain that Phish would be a band I would grow old with. I couldn’t even fathom a life without the band and surely, like the aging hippies I saw at shows or read about, would live the rest of my life with Phish riding shotgun, just had they have/had/did with the Grateful Dead.

Bob Marley, Rustic Overtones and Phish- music I would never get tired of and one day, introduce to my children.

Yet like most things we do in college, the staying power of this belief wasn’t that strong. I drifted from Phish pretty soon after college was over and will freely admit that the inclusion of mandatory drug tests in my first post-college job probably had something to do with it. Jam bands in general fell by the wayside, although I was never huge into a lot of them anyway- mostly just Phish and moe. I got into harder stuff, got into more hip hop and fell for bands like My Morning Jacket, Kings of Leon, the Roots and Rogue Wave. I fell back in love with 311, gradually got back into Pearl Jam and you know, always thought the Foo Fighters were a lot of fun.

Oh, and I can’t forget Sublime.

But I could forget Phish.

In my defense, they did break up for a while there and I did travel to Vermont once to see a Trey Anastasio solo show. I remember seeing one of their last shows before their hiatus and being somewhat taken aback by how the whole thing felt forced to me. I wasn’t into it; definitely not like I used to. The dates are hard to pinpoint, but there was definitely a point where I subconsciously crossed Phish off of the list of bands I’d grow old with. 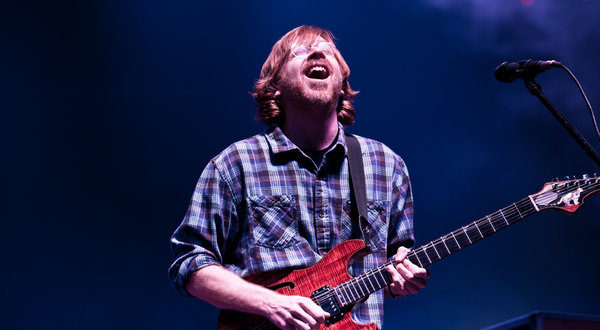 Fast forward to once specific day this summer.

I was outside, doing work around the yard- mowing, bullshit like that. Looking for something to listen to, I was scrolling through my free trial of Apple Music and came across a Phish live album, a recording of a show from Ventura, California. The set list was a good mix of old songs, really old songs and some new ones I was familiar with so I gave it a listen. It’s really good. “NICU,” “Wolfman’s Brother,” “Punch You in the Eye.” Shit brought me back and yard work got significantly more enjoyable. I texted a friend who was still very into the band and he suggested the Phish On Demand app- an app chalk full of torture and jams and live shows. I suddenly found myself listening to Phish more. They weren’t in heavy rotation, but they had cracked general rotation- made their way into Gen Pop. Cheesy to say this, but yes, it was very much like connecting with an old friend I hadn’t seen in years.

Now I have no idea how long this will last, this Phish rebirth. I don’t know if it’s just a passing fad or something that might last. It could just be a summer fling that like most summer flings fades once the weather turns. Already I’m not listening to them as much, but I’m still listening some, which is a jump from even a year ago when they had vanished from my radar. Hey man, Phish is good. Don’t hate on Phish and I don’t even know who I’m talking to right now. Phish gets a bad rap. I’m not the right person to defend them, but I can easily recommend someone that should and could.

Putting together a playlist of live tracks is way to heavy of a task, way to much of a commitment and in all honesty, something I am simply not qualified for. Right now if I want to listen to something live by Phish, I’ll play that Ventura show or peruse Phish On Demand. So I made a playlist of Phish studio tracks, a playlist that would probably be poo-poo’d by die hards, but I’ve never cared for those people and don’t intend to start to now.

Nice to have you back Phish. I mean, don’t get too comfortable. But sure, you can stay for a couple nights.