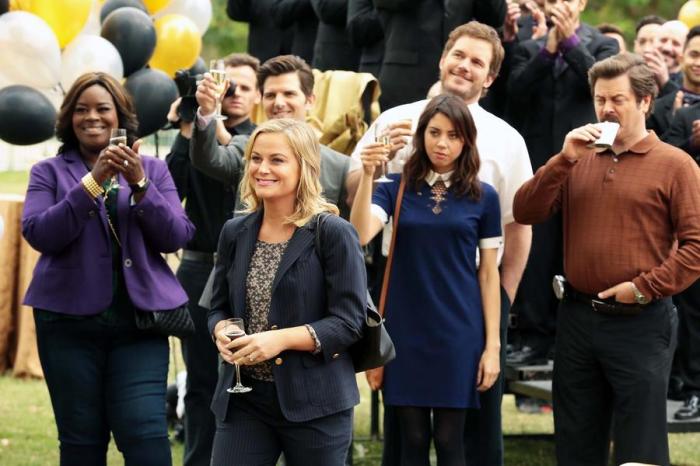 Somehow and some way Parks and Recreation will wrap up a seven season run Tuesday night. I’m pretty sure the show was almost cancelled at least five times. I remember reading how the show’s producers were convinced that each season would be the show’s last, which is what led to the feeling of finality that loomed over each season’s finale. But it kept on trucking with the sheer will, passion and determination that embodied the show’s main character, Leslie Knope.

Yet while Knope was definitely the show’s main character, the strength of Parks and Recreation was the ensemble, the super deep bench and circle that backed up and surrounded Knope. Parks and Recreation put on a clinic on how to create a rich, deep and endlessly entertaining ensemble of a cast. Tom, April, Andy, Ben, Ann, Garry, and of course, Ron Effin’ Swanson. Picking a favorite is damn near impossible- there are no wrong answers! You say Tom, I say Andy and whatever, we’re still best friends. Let’s go do karate! Or go treat yo’ self. Again, totally up to you and totally not wrong regardless.

So with the show ending, something I feel ultimately okay with because while I will miss it, it does kind of feel like it’s time, I don’t want to do a list a favorites or a power ranking of characters or even a Parks and Rec Stock Market. No. There is only one thing I want to do honor the finale of Parks and Recreation.

The Rules: Pretty simple, which character would make for the best drinking buddy? And what makes a good drinking buddy? Well, that depends on the person looking for a booze guzzling partner in crime. But I think universally we can all agree, a good drinking buddy is up for a swell time, makes for interesting and lively conversation and when it all comes down to it- is down for anything. And this is what separates a traditional Best of list from a list of quality drinking buddies. For instance, if you were making list of The Best Basketball Players You’d Want On Your Side at the End of the Game- Kobe would be probably first and LeBron second. But if you were doing a drinking buddy challenge for the NBA, LeBron would be ahead of Kobe. And Dirk Nowitzki would probably be ranked higher than both of them.

Okay, let’s do this.

Oh and I’m mainly ranking main characters and some of the more notable fringe characters. Lil’ Sebastian is not nominated. Mostly because he’s a mini-horse.

Now let’s do this.

Uh, Jamm is a mega douche. The only reason why he’s even being considered is because he’s a dentist and don’t you think dentists, you know with a couple drinks in them, would have some pretty funny stories? I bet they would.

Well I’m married and Joan is a blood-thirsty, man-hunting cougar. I don’t think it’d be a good move for anyone involved.

Craig is a late addition to the Parks team and he’s been a solid one at that. Count me as a big fan of Billy Eichner. However, I am not a fan of loud noises and that is Craig’s specialty. Going to have pass, Craig. Sorry dude.

Listen I love Jean-Ralphio. He’s hilarious. Any scene he’s in is made ten times better just by his presence. However, this is about drinking buddies and there can’t be any kind of debate here- Jean-Ralphio would be a terrible drinking buddy. He probably would stick me with the check, he’d probably get in at least one fight, he’d probably make me drink absolutely terrible cocktails that are undrinkable but according to him need to be drank because Usher drinks them. I don’t give a shit what Usher does, Jean-Ralphio. No deal!

Easy. Too high energy. That is literally not my style.

The story of this ranking, is that it’s the number thirteen, which is where Perd is ranked.

I’m not sure I could handle that kind of brutal honesty.

I’m actually hard-pressed to think of a situation where I’d want to hang out with Tom. I feel like we’re playing two different sports. I’m playing baseball, Tom is playing some weird futuristic sport that makes absolutely no sense to me and requires both a tie and a pocket square. At the very least I’d be down to grab a drink with Tom, but Tom as a drinking buddy seems like something I’m not mentally, emotionally or physically prepared for.

Pawnee’s man of many names is a genuinely good dude. And I like good dudes. Good dudes are wonderful people to be around. Plus Garry is the human equivalent of a compliment, which is something everyone could use…especially after a few drinks.

If this were a People-Watching at Outlet Malls Buddy list, April would easily come in first. But it’s not. So she’s ninth.

My kind of guys. Plus they’re hilarious.

On a quick related note: I’m very sad about the sudden death of Harris Wittels. He was only 30 years old and incredibly talented. Over the past few days, his death keeps creeping into my thoughts. I think it’s because ultimately, he seems like someone so familiar to me and I think that’s why his death has stuck with me. It really is a shame- so young and with such a promising future ahead of him. Here, take a break from this post and spend a few minutes running through some of Harris’ best Humblebrag columns over on Grantland. I can wait.

Little blurred lines action here because to be honest, I’m having trouble separating Bobby Newport and the actor who played him, Paul Rudd. And I really want to hang out with Paul Rudd because frankly, he seems awesome. As for Newport, he’s actually kind of cool too, would laugh at my jokes and probably pick up the tab. I’m counting this one as a win/win!

See now Donna, I think we could dance together like Kenny Rogers and Dolly Parton, Tango & Cash or Punky Brewster and Cherrie Johnson. Some laughs, some shots, some creative shit talk and totally judgmental people-watching. Thumbs up for Donna.

I feel like I’ve had this exact same conversation…just not about a dude.

And I’ve definitely chased a straw around a glass.

Sidebar: I love Ann Perkins and really hope she shows up on tonight’s finale.

This starts a top three that I really had to think about…like probably think about more than anyone should ever think about something like this. When it all comes down to it, it’s all about where I’m at in my life. And I should remind you, this is my drinking buddy challenge. Feel free to do your own. Or don’t. Whatever. Your life, man. But this is both my life and my drinking buddy challenge. And currently, at this stage in my life, I’m not sure Andy and I are a good match. If this were five years ago, that might be different. But it’s today and while I think grabbing a beer or two with Andy would be fun, watching football with Andy would be fun, playing dress up and acting like FBI agents would definitely be fun- going all out as a drinking buddy with Andy would come with some liabilities and potential hazards to my health that at this point in my life, I don’t think I’m ready for and/or equipped to handle. I’m sorry Andy.

The same reasons why Andy wouldn’t be my ideal drinking buddy are the same reasons why Ron Swanson totally would. I get down with sipping on some whiskey and I am strangely interested in wondering how something like a bar is constructed. While I don’t hunt, I do enjoy talking about random things- which to me, hunting would be. Like Ron, I think the government is too big for it’s own good, taxes are obnoxious and meat is delicious.

And you know, sometimes, things might get a little unhinged and you need a drinking buddy who is totally cool with that.

Adios Parks and Recreation. You were a pleasant surprise in your second season, I more than suitable replacement for The Office and a reliable show to turn to in your later years. You’ll definitely be missed.