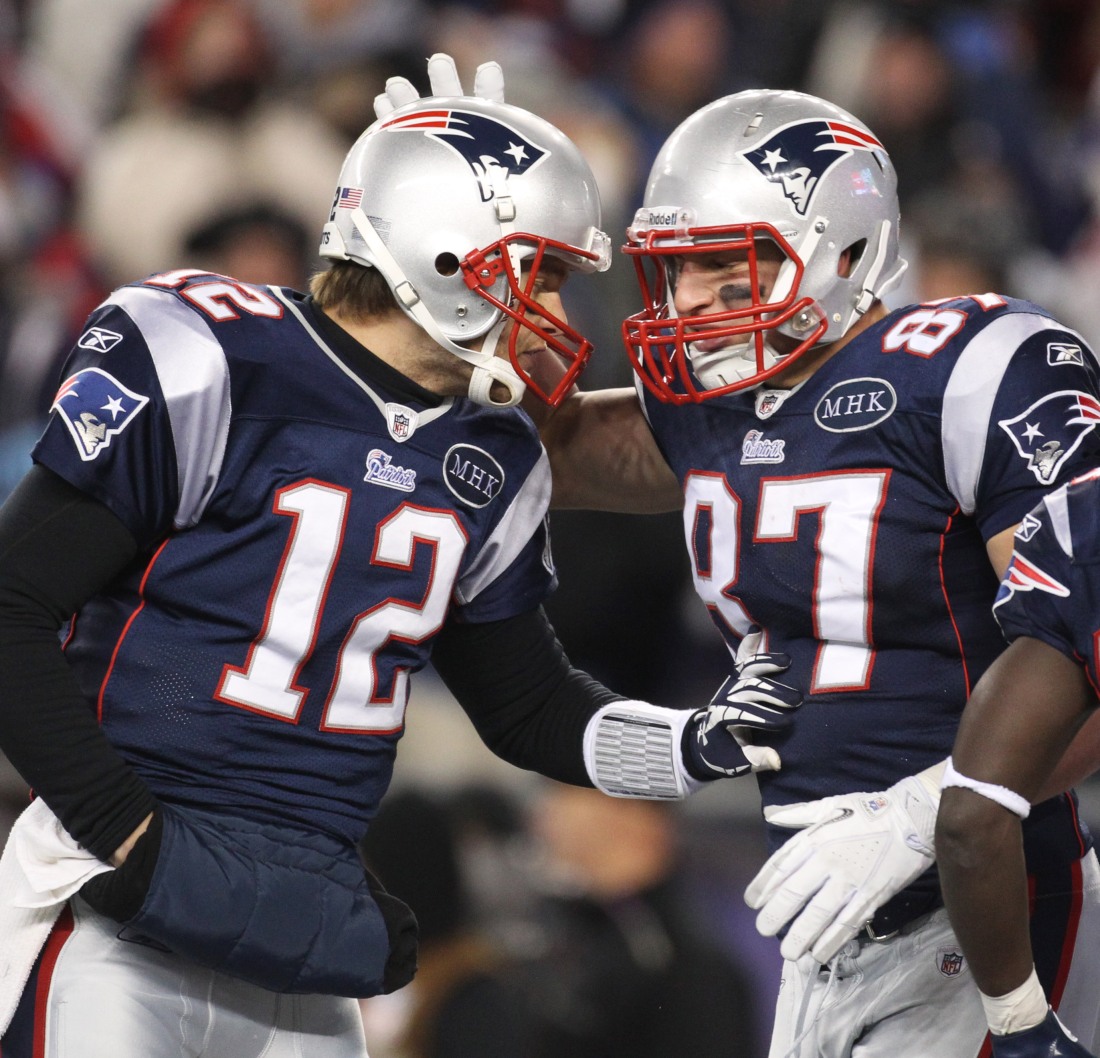 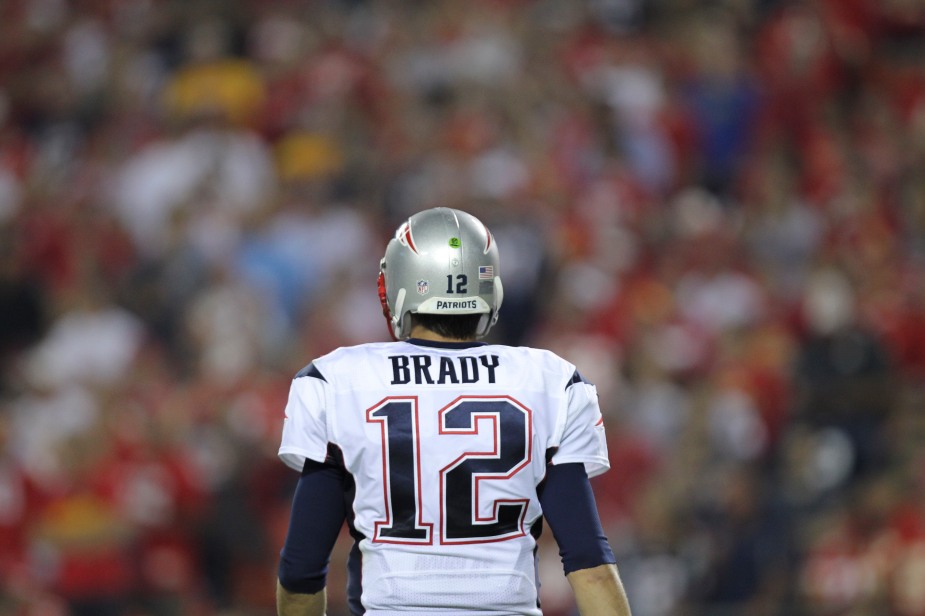 Two days removed from the Patriots’ demolishing the Colts and earning yet another trip to the Super Bowl and it’s kind of hard to keep my spirits up. Which is crazy! My team is going back to the Super Bowl. I should be stoked, super stoked, bursting at the seams. And for a time I was. It was Sunday night. It was beautiful.

I don’t know. For some reason, I’ve felt…deflated. You know, like someone has removed the air from the tires on my monster truck of enthusiasm. It’s disheartening to say the least. And really, how the hell could this have happened?

Oh yeah, it’s the Patriots. The Patriots don’t win. Apparently they only cheat, which leads to “victories,” but not wins. Winners win. The Pats aren’t winners, but low-life cheating vagabonds. They’d steal a loaf of bread from an old woman if they needed too.

Hold up now, the Pats are going to the Super Bowl! Now that is pretty awesome! It’s the sixth time they’ve gone during the Belicheck/Brady era. God, us Pats’ fans are lucky bastards. Think about it, we could be Lions’ fan. I think that’d be tough business.

I think I’m incredibly lucky to have Tom Brady in my life and when he finally does hang up his cleats and head butts and eff bombs, it’ll be a sad day. Look around the league- at the Jets, the Browns, the Arizona Cardinals and more- all of these teams with dumpster fire-level quarterback situations. We’re spoiled. We’ve had one of the best in the business since 2001. 2001! That was like, a long time ago. During that time the Browns have started 19 different quarterbacks. 19! It’s crazy, man; crazy how lucky we are and how fortunate we’ve been. Not only are we witnessing one of the best quarterbacks ever, but he’s our quarterback. The post-Brady era will be rough, so it’s important we cherish this time right now, hold it tight, sing it love songs. Do whatever is needed just as long as when all is said and done we’ve appreciated Thomas Football Brady.

I think the Pats’ offense will be the deciding factor. They’ll be held in check by the Seahawks’ defense, but not enough for the inept Seahawks’ offense to actually out score the Pats.

I think America needs to realize that Richard Sherman is the worst kind of trash talker- the front-running kind.

I think that the only celebrity couple I really & truly care about is Tom Brady and Gisele.

I’m not going to lie, I’m a little bit obsessed with their marriage. They seem like aliens, so not of this world. But then they look so normal on social media- just being parents, being adorable. I can’t even hide it anymore- I’m obsessed. But in a good way. You know, just in case either one of them is reading this.

I think Do Your Job is a good mantra for this year’s team, but As Gronk Goes, So Goes the Pats is equally fitting.

I think Gronk is just having more fun that everyone else.

I think I want to be Julian Edelman when I grow up.

I know our sweet dog Lucy does not care for my antics during Patriots’ games. 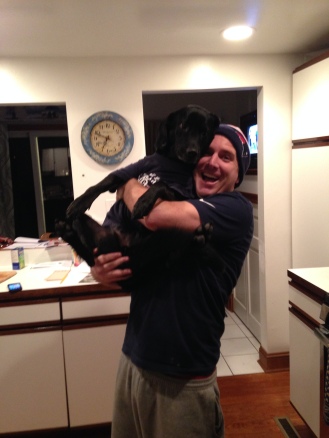 This Sunday, she went into her emotional bunker even before the game started. She knew what was going on as soon as I put her Patriots’ t-shirt on her. Lucy spent the majority of the first quarter hiding behind My Darling Wife, who was in the kitchen whipping up some delicious chili. Only one more game, Lucy. One more game.

I think the Colts are two years away from dethroning the Patriots.

I think Tom Petty is great and I don’t know why it took me so long to realize this. It’s like how I didn’t get into Bruce Springsteen until my late twenties. I just feel like there’s a difference when it comes to classic rock and what classic rock you listen to when first discovering it. A middle school kid will get down with Led Zeppelin, but probably not with Bruce or Petty. You kind of need some life behind you, some maturity under your belt to appreciate Bruce and Petty. To get started with Zeppelin you just need to have enough smarts to realize they rock and that’s simple enough. God help me if my late thirties finds me getting into the Eagles.

I think I really enjoy this playlist of 30 great Petty songs I made.

I think that even if the NFL clears the Pats of any wrongdoing in this Deflate Gate mess, the general public won’t care. The Patriots are already guilty in most people’s eyes, regardless of proof. Life kind of sucks that way sometimes.

I think 2007 (when Spygate happened) was roughly seven years ago. Imagine if everything you did now was seen through the cloudy lens of something you did seven years ago? That’d be pretty bogus, huh? Yeah, it would. What happened to this being a country of second chances, of moving on from your mistakes, learning from them? I was listening to yesterday’s Pardon the Interruption this morning and co-host Michael Wilbon was less than realistic about the Patriots’ history.

Michael Wilbon: "The Patriots remain on probation due to spygate".

He also said that if found guilty, then they should have to forfeit their spot in the Super Bowl. Why? Because it’s been one thing after another with them since Spygate?

Come on. The reality is that the Pats got popped in 2007, but haven’t gotten nailed for anything since. In fact, if they’ve been nailed for anything, it’s baseless accusations and paranoia- a lot of which is highlighted in this ridiculous Sports Illustrated article by Michael Rosenberg. Before this week, it was last week, with Ravens’ coach John Harbaugh calling the Pats deceptive and griping about them playing fast and loose with the rules when they were, wait for it, DOING SOMETHING COMPLETELY LEGAL. I know I’m biased here, but come on. At some point this needs to stop.

I think it would really suck if the Patriots were guilty of purposely deflating game balls to gain an unfair advantage.

I think it seems like something that now, would be pretty hard to prove.

I think it seems like it would all come down to hearsay, which doesn’t seem to be something that would bear much weight in this situation.

I think Gronk said it best…

I think Vince Wilfork is a great American. I thought that before Sunday and I definitely think it now. As should you.