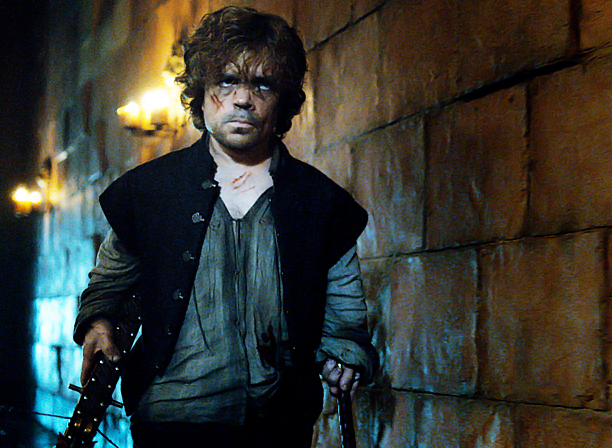 And with that, with an old man dead on the shitter, with weird hippie children throwing fire balls and with giants’ corpses stanking up the halls, season four of Game of Thrones came to an end. We now wait patiently until the teasers for season five start leaking out and we count the days until we’re back in the not-so friendly confines of Westeros. Last night’s finale was bloody, merciless, crowded and timed perfectly to end just as the fourth period of game 5 of the NBA finals was starting. Nothing says I need something light, something to smile about before bed like the Heat losing.

Let’s get into the power rankings.

The action in King’s Landing narrowly edges of the goings-on up north thanks in large part to Tyrion being freed from the slammer by big bro Jaime (with a little spring in his step thanks to an earlier reconnecting with Cersei…eewwww) and then going all Emily Thorne before heading east to the Free Cities. Two weeks ago I wondered how in seven hells could Tyrion escape imminent doom. This is what I came up with…

The First Possible Way Tyrion Escapes Execution: Word of the assault on the Wall (looks like this is next week) reaches King’s Landing and distracts everyone. Tywin remembers Tyrion was actually pretty astute at strategy and grants him a stay of execution.

The Second Possible Way Tyrion Escapes Execution: Jaime cuts another deal with Tywin, similar to their last deal in which Jaime stepped down from the King’s Guard to move back home and father him some kiddos, but maybe with an added caveat- like the first born is named Tywin or something like that. Admittedly, this one is a little weak but ultimately so are Tyrion’s chances of survival.

Apparently there was a fourth possible way, someone trusted Jaime with the key to Tyrion’s cell. Not to be a downer, but couldn’t this have happened sooner? Like before Oberyn’s head was crushed like a watermelon by the Mountain? And speaking of the Mountain- what’s going on with the whole Frankenstein thing that looked to be going on? Is it a Captain America situation?

Anyway, now Tyrion, snuggled up in a crate, and Varys, looking a tad bit guilty, are headed east. But not before Tyrion decided that he needed to celebrate Father’s Day Westeros-style. Or maybe he was just coming to say goodbye, remind his dad to take his heart medication. But any tenderness went out the window when Tyrion came across his former lady friend Shae in his dad’s bed. Shae. Shae (I said it that time with a shaking head of disappointment.) Tyrion rightly snaps (kind of literally) and decides that it’s time for Tywin to go. And it was. It was the next logical step for Game of Thrones, where chaos is swiftly introduced anytime any slight hint of calm is thought to be coming. The craziness ushered in with Joffrey’s death was only a snippet of the chaos coming in hot with the death of Tywin. Tyrion was able to do what Jon Snow wasn’t- chop the head off the snake. And on the crapper no less. Found this cut scene on the Interweb of King’s Landing janitors discovering Tywin’s body.

For a wonderful tribute to the dearly departed Tywin, check out this one Grantland put together. Thanks for the memories, sir. You’ll be missed. Just not by your children. Pretty sure they’ll be totally cool with you being dead. You were kind of a dick.

If you’re like me, you thought Jon might have to walk just a little bit further to reach Mance Rayder’s tent. But nope, seemed to be just down the street. Pretty easy actually. Almost as easy as Stannis’ forces sweeping in unnoticed to surround Mance’s army. Looked cool, but really, no look outs spotted a shit load of horses coming towards them? Bush league. Honestly the coolest part of this whole thing was two main characters actually interacting with one another- a rarity for Game of Thrones. Oh and what was with Melissandre eye-balling Jon Snow while the dead Night’s Watchmen burned? Let’s be real, her track record with young dudes is sketchy at best. Little worried for Jon here.

Well that escalated quickly. For a second there it looked like Brienne and Arya were going to become buddies and punish Westeros with girl power for years to come. Then The Hound came along with his fairly accurate points about the actual location of “safety” and shit took a turn, Brienne took an ear, and Arya took a boat. Is The Hound dead? Definitely looks that way, although some people more educated in certain areas of pop culture than me would argue that a character ain’t dead until you see ’em dead. So take that for what you will. The Brienne/Hound fight was probably one of the more emotionally confusing battles in a while. I kept changing my mind about who I wanted to win and at one point, was just rooting for a draw. Then I remembered Game of Thrones doesn’t do draws.

Which is cool, I guess?

In terms of buzz kills, where does Bran, upon finally meeting the three eyed raven he’s been chasing and being told that secrets were going to be unlocked (or whatever the hell was going in the former home of the Yellow King) but learning that there’s still no cure for the whole not walking thing rank? I’d have to think it’d rank pretty high. But apparently he’s going to fly now, so yeah, eff you walking. This whole thing was kind of cool, but also a little too fantasy-esque for me. Although it also seemed to touch upon some history and back story to Game of Thrones, which could be really interesting going forward. #promise

The Mis-Education of Daenerys Hill

Dude, talk about the slow road to Boredom town. Nation-building, misbehaving kids, the friend zone, manning the complaints department of the Kohl’s of Mereen. Daenerys went from the most exciting part of Game of Thrones to one of the most boring. I’d say the most boring, but we can’t forget Theon and Ramsey Bolton. As long as they’re around, that spot is secure and spoken for. Danys putting a leash on her dragons wasn’t just symbolic of the problems with getting too big for your britches too quickly, but symbolic of Danys’ current spot in the Game of Thrones universe. Homegirl is locked down, chewing dead meat and not looking like she’s going anywhere anytime soon. Remember this scene and then, remember this scene? Good. Because they seem to have happened years ago. But it’s important to remember how Daenerys got to where she is and why she became such a fan favorite in the first place. She wasn’t always stuck in Boredom Town. She just is now. Hopefully she won’t be for much longer.

As we now sit and wait for season five, there are some questions to kick around until next April comes.

What does the future hold for Jon Snow?

Partners in crime with Stannis? Commander of the Night’s Watch? Melissandre sex toy?

Who are Bran’s new friends?

The fire-ballin’ hippie kids living in a tree? Here’s a start.

What are the chances of Arya and Tyrion connecting in Essos?

Probably slim to none, but it’d be cool if they did.

How can Daenerys get interesting again?

Start by getting back on the road. Danys ain’t no house cat, yo.

Will we ever see Gendry again?

Game of Thrones does subscribe to The Wire’s “all the pieces matter” theory…so you’d have to think so.

What will happen with Sansa 2.0 and Littlefinger?