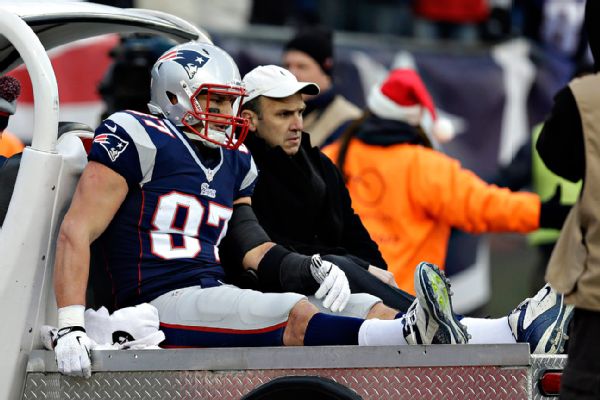 Hey, here’s some things to think about about on a snowy Tuesday.

The first thing to think about..

I’m still coming to terms with Rob Gronkowski’s latest season-ending injury. It’s a flat out twofer of not awesome news. First off, it puts any lingering hopes of a Patriots’ Super Bowl run on life support. The 2013 Pats B.G. (Before Gronk) were a lot harder to watch than the 2013 Pats W.G. (With Gronk.) They weren’t that good and at times, a dumpster fire of an offense. Especially in the Red Zone. It’s hard to imagine the offense will be able to sustain their recent success and good play now that they’re the 2013 Pats A.G. (After Gronk.) Aaron Hernandez, Vince Wilfork, Jerod Mayo, Sebastian Vollmer. At some point, a team loses too many good players. I’m worried that’s where the Patriots are now.

The other bummer with this is that quite simply, there’s no more Gronk. That crazy man beast is one of the most entertaining players to watch play football and once again, he’s gone. He’s become the Haley’s Comet of the NFL- a sight to see, albeit an exceptionally rare one to see. And now he’s out for a year. A year. He won’t be back until the middle of next season in the best case scenario. I don’t think we’ll ever see a full season of Gronk and that’s a damn shame. It also makes me think that at some point, doesn’t the knock on the NFL become that injuries aren’t just hurting players, but subsequently removing those players from games and in turn, killing the entertainment value of football? I watch Patriots’ games and part of me is just hoping Tom Brady makes it out alive. That’s not cool. And it’s not fun either. I’m starting to think that if the NFL becomes two hand touch, than so be it. Whatever it takes to ensure the players I want to see play are actually out there playing.

Another thing to think about…

Did you watch that new Bonnie and Clyde movie? I did and to be honest, I might be now regretting it. It’s not that good. And on top of that, it only takes one Google search to find out that it’s riddled with factual inaccuracies. Not that awesome for the Bonnie fans out there either, because according to the writers, she was the evil genius behind the operation- which kind of, sort of isn’t true. I’d give it a C- and suggest watching old black and white clips on YouTube about the pair instead.

And then there’s this to think about…

Yesterday Roy Halladay announced his retirement. That’s like Heidi Klum saying she won’t rock a catwalk in lingerie anymore, which also came out yesterday. Bummer. In his prime, Halladay was the real deal and I was stoked when he came to the Phillies. He had always been one of my favorite players, but seeing as how he was Blue Jay and in the same division as the Red Sox, I could never support him 100%. That changed when he joined the Phillies. Cole Hamels and Cliff Lee are great pitchers, but Halladay was larger than both of them. When he pitched, it was an event. I remember where I was when he pitched a perfect game (on a date with Kim in Olde City) and I remember watching every pitch he threw when he no-hit the Reds in the playoffs at a bar in Boston the night before my Dad had surgery. All the respect in the world for Doc. All the respect. Tip of the hat to you, sir.

I can’t get enough of this song, “Riptide” by Vance Joy. It’s toe-tapping and fun to singalong too. I don’t know much about Mr. Joy. Yet. I intend to do some investigative journalism about him soon.

Oh and one more thing…

Elijah Ocean used to play in Loverless, a band in sunny Portland, Maine and I loved me some Loverless. Now Elijah lives in Brooklyn and has changed his style dramatically. No longer into big, loud rock ‘n roll, Elijah has become something of a bearded, alt-country troubadour. He’s worth checking out, I’d recommend it. You can learn more about Elijah Ocean on his website. But in the meantime, I’d give his song, “Ride It Out” a listen. Big fan of it. Big fan.

Other than that, enjoy the snow.