Home › Music › The Show Must Go On

The Show Must Go On 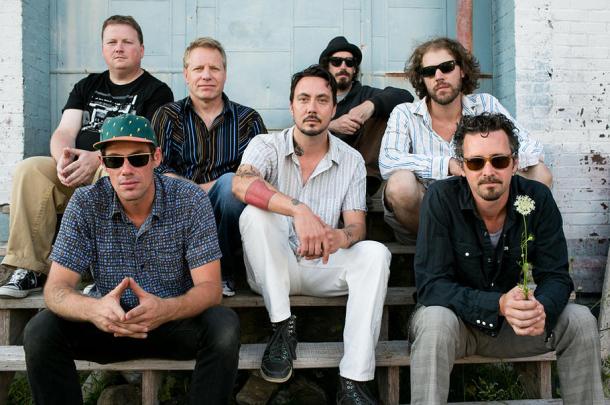 The world is a crazy place on a not so crazy Monday.

But, hold up. What a minute.

Yeah, I was excited too.

The seasoned stalwarts of the Maine music scene recently released Let’s Start a Cult, Part 2, a sequel of sorts to their 2012 album, Let’s Start a Cult. All in all, it’s the band’s eighth album. And all in all in all, it sounds miles and miles away from (randomly picking) their fourth album, 2001’s Viva Nueva. It even sounds a couple miles away from the first installment of the Cult series.

If Let’s Start a Cult, Part One was a band rediscovering/reinventing itself- then this album is the product of that hard work- of that time spent in the wood shed hammering out new sounds and incorporating new members. This latest entry to the band’s hallowed discography is more focused and more polished than the last album, an album that I’m still not that big of a fan of. It was too short and sounded too different than the Rustic Overtones I had grown up with. Change is good and all, unless that change is too jarring, which is what the kind of change Cult, Part One was.

In retrospect however, it seems that album was necessary- a needed rung in the ladder Rustic was aiming to keep climbing. In sports they talk about rebuilding years and/or bridge years. Let’s Start a Cult, Part One was Rustic’s bridge year. It was an album consisting of minor leaguers and past their prime vets bought on the cheap to keep the bus moving; to stay competitive enough to keep the people interested.

I’m not saying the band bottomed out, though. They just needed to get a little dirty to get clean. Although that kind of implies they killed someone…

Disclaimer: Rustic Overtones did not kill anyone.

Disclaimer to the Disclaimer: I can’t prove that.

Back to the album, which it should be noted, has it’s merits; it has it’s pros and cons.

A Pro: The Horns

The horns on this album are incredible. And they’ve always been incredible. But wisps of gray hair and roads traveled have done them well. In Rustic’s formative years, the Rustic horns could always be counted on for the power lines, the strong accents and more often than not, that little somethin’ somethin’ that pushed Rustic’s songs over the edge and into hot damn territory. On Cult, Part Two, they branch off into Paul Simon country. The horn lines are light, acrobatic and jubilant- still accenting, but doing so with less weight, more finesse. For the sports fans: they have shifted from a power running game to an intellectual aerial assault.

It seems that the days of songs like “Combustible,” “Check,” and even a song like “Iron Boots” are long gone, at least when it comes to albums. The Internet tells me that they’re still part of the band’s live show. But how? I’m left wondering how Rustic pulls together the various sounds they’ve toyed with over twenty years into a two hour set. I’m also left wondering how even after three Thanksgivings, I still think turkey sounds like a good idea for dinner. But that seems unrelated.

I lamented the loss of Tony MacNaboe, Rustic’ former drummer, and at times, I still do. It’s one of the few things I still lament (running out of milk is another.) But I have now come to terms with the new drummer, Gary Gemitti. Homeboy can drop a groove. It might not be one with a whip crack snare hit, but it’s a groove. And his beats sync up perfectly with the bass lines played by Jon Roods. Afro beat, salsa, lounge funk- all there and all delightful. I know look upon you like a brother, Mr. Gemitti and no, I don’t know what that means, but it felt like it made sense.

A Con: The Length

It was an issue I had with the last album and it’s an issue I have with this one- it’s too short, man. It feels like it’s over before it starts, something I never thought I’d say about a Rustic album. Not sure why it is, but these past two albums have been a smidget of what previous Rustic albums have been in terms of content. I know the kids don’t really listen to albums today, but screw them and their X Boxing video phone watches. Albums should be at least ten songs long unless each song is over five minutes. That’s a rule and a fact. I’d say look it up, but don’t. Look at this instead…

Let’s Start a Cult, Part Two is a good album. That’s it- a good album. It’s not terrible, it’s not amazing. It’s not my least favorite Rustic album (that’s Let’s Start a Cult, Part One) and it’s not my favorite (that’s Rooms by the Hour.) In the end it’s ultimately another solid entry in the catalog of a great band with a great career. “Martyrs,” “High on Everything” and “You Should Be Worshipped” are great songs and the album’s opener, “The Show Must Go On” is a perfect tune to usher in this new phase of Rustic Overtones’ career.

What’s next for Rustic Overtones and where do they go from here?

I have no clue.

And I kind of think they don’t either, which is something I find exciting.

The show must go on indeed.

To learn more about Rustic Overtones, check out their website.