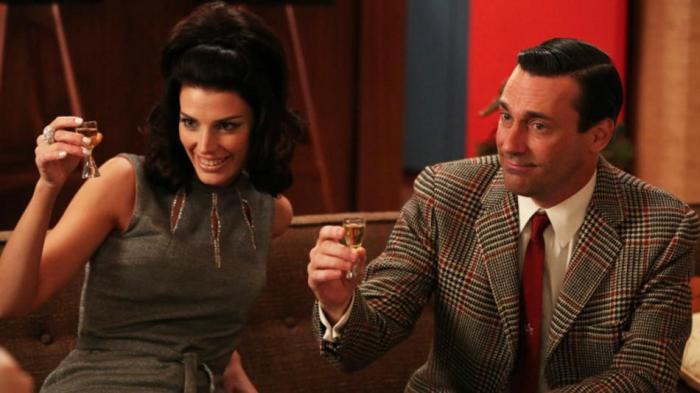 The new season of Mad Men kicked off this Sunday. Oh how I missed the tension, the sense of foreboding, the complex nature of our relationship with Don Draper. Don has a friend! That’s awesome. Don’s sleeping with that dude’s wife. Not awesome. The two hour long episode, “The Doorway,” was great, even though it flirted with being boring at times, as well as the slow march of death. On the plus side, it did make me appreciate facial hair. Bonus.

Unlike most of the characters’ facial hair, one thing that hasn’t changed is the fact that I don’t really trust anyone on the show. It seems every characters’ decision making is questionable. They frequently take self-preservation to new heights. But how can I effectively quantify my level of trust with the show’s characters? It’s not fair to a show that complex to simply wave a broad stroke and spit out a generality like I don’t trust any of them!

And let’s say I needed someone to watch my dog for the weekend.

And let’s say the only people available to dog-sit for me was characters from Mad Men.

On a scale of trustworthiness, how would they rate?

Instead of doing this to all of the characters, let’s focus on five.

Sure at first, you’d probably think someone with such questionable morals and ethics as Don would be a lock at a 1. I’m tempted to even give him that myself. But I’m not. I’m giving him a 2. Why 2? Because every once in a while, Don does the right thing. Why he does the right thing is beyond me. Sometimes it’s because the ghost of his brother visited him or because Sally inspired him. Sometimes it’s because a fellow military man caught him at a vulnerable time. Maybe he’ll look my dog deep in it’s eyes and feel a kinship with it, prompting him to take care of that dog like it was own. Oh wait, didn’t the Drapers have a dog? They did! What happened to it? Maybe I should rethink this.

I’d be cool with this new Roger that we’ve seen so far, especially now, after he learned of the deaths of both his mother and his shoe-shine guy. He’s learned that life is valuable. Maybe? Granted he didn’t really learn this after he himself almost died, but this is a new Roger! One with sideburns and a penchant for hallucinogens. I don’t want him taking acid while dog-sitting, but I understand spending quiet time with a dog and having conversations with a dog better than most. And frankly, that seems right up his alley these days.

I wouldn’t leave my pet rock with Pete and I don’t even have a pet rock. But if I did, that pet rock would be better off fending for itself.

Hmmm…which Betty would I be getting? The Ice Queen or the Matronly Rescuer of Violinists? That’s why Betty’s a three. It’s hard to say. It’s also hard to say what I think of dark-haired Betty.

I’m a big fan of Stan’s, and that was before he grew a big bushy beard that looks it has not one or two, but three or four little birds in it. He might be the most likeable character on the show- 100% likeable. No asterisks. He’s also the second funniest person on the show, behind Roger, whose never giving up that title. I want a Stan-centric episode. I want to learn more about this witty illustrator. I not only would feel completely comfortable with him dog-sitting my imaginary dog, but would kind of want to be there so we could hang out. Is there a Stan fan club? If not, I may be inclined to start one. I’d need to come up with a name clever enough to honor Stan. Going to have to think about this one and get back to you.

Stay tuned for more Mad Men recaps throughout this season.

Like Loading...
‹ Astute Baseball Analysis: Irrational Predictions for the 2013 Red Sox
Initial Reaction: The Made in America Lineup ›