Home › Movies › The Five Best Things About ‘The Departed’

The Five Best Things About ‘The Departed’ 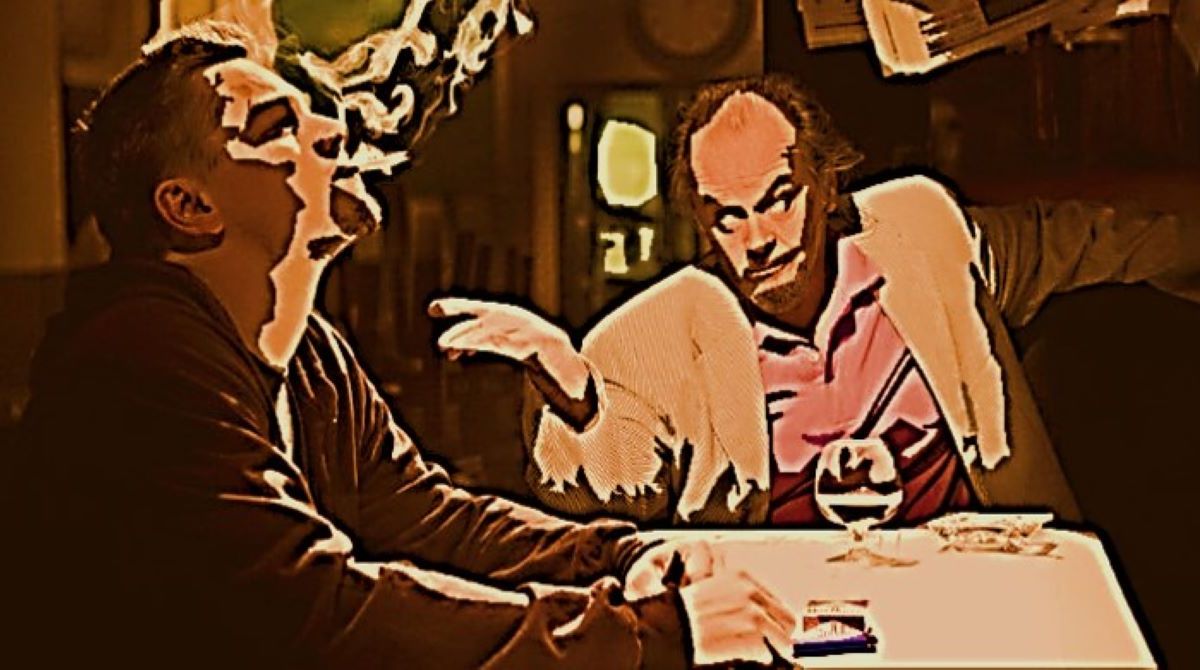 I remember being very excited to see The Departed when it came out in early October of 2006. I even can remember the night I went, how we drove out to a theater in the suburbs of Philly to see it, probably the first movie I saw in theaters after moving to Philadelphia a few months before. As far as I was concerned, the movie had it all. It was a Martin Scorcese movie and those are great 97% of the time and it starred Leonardo DiCaprio, Matt Damon, Jack Nicholson, Mark Wahlberg among others. Plus it took place in Boston and I love Boston.

Oh, and it was a gangster thriller. So many wins.

It might have been opening night when I saw it. That’s how excited I was.

And I was not disappointed. The Departed is fantastic. Flawed, but fantastic. It’s incredibly rewatchable with the tension built into the film still there no matter how many times you’ve seen it. It’s a wild performance from DiCaprio and Matt Damon wouldn’t be that unlikable again until almost a decade later when he decided to give an impromptu lecture on diversity. Wahlberg and Alec Baldwin each take huge at-bats coming off the bench and even though his Boston accent is suspect, Nicholson is both mesmerizing and completely menacing, playing a character that is a stand-in for the real-life Boston gangster Whitey Bulger.

Fifteen years and countless rewatches since I first saw it, here are my five favorite things about the movie.

With the movie being released in 2006 and presumably set around that time, The Departed is a wonderful look back at the captivating world of flip phones. I think that we’ve forgotten how great the flip phone was, especially in this era of smartphones. Smartphones are pretty sweet but they definitely lack certain things that flip phones had, most notably the rewarding feeling of closure you got when hanging up with someone and snapping a flip phone shut. A massive “and I said good day, sir” move if there ever was one. Now when we end conversations, we have to press a button. That’s lame. With flip phones, when you were done with the conversation, you snapped that baby closed and that was that.

Plus, flip phones felt so good up against your head. They physically made sense, something smartphones will never do, at least not when using them as a phone, which I suppose is something happening less and less these days.

And let’s not forget the technical wizardry DiCaprio performed when sending completely coherent text messages FROM HIS POCKET. He didn’t even have to look. It was all thumbs baby. Amazing stuff by our boy Leo.

But I do have to wonder (and I have, don’t worry about that,) would it actually be easier to pull off that move with a flip phone as opposed to a smartphone? Probably, right? With smartphones, there’s no touch to it, no physical landmarks to help you along your way, not like there were with flip phones. If you do need to send a message from your pocket, something succinct like “no phones,” that actually might not be that hard provided you have a familiarity with the keys. The pocket texting scene has always been pointed out as one of the least believable scenes in the movie but maybe, just maybe, it’s one of the most believable. 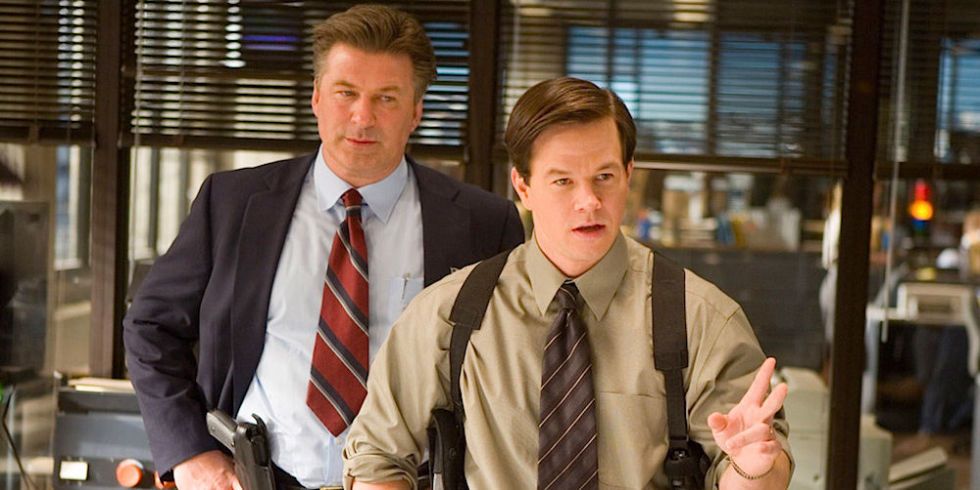 Baldwin and Wahlberg both have supporting roles in The Departed with each playing members of the Boston Police Department. Wahlberg’s a sergeant, helping run undercovers like DiCaprio’s character and Baldwin is a captain overseeing the operation to bring down Nicholson’s Frank Costello. In lesser hands, these roles would have been forgettable. But thankfully, that is just not the case here. Both dudes steal their scenes and help make The Departed as great as it ended up being.

In a list of the best scenes or best dialogues, Baldwin and Wahlberg would be well-represented.

And then Wahlberg again:

So many times, great movies are made great by their supporting casts as directors know that the secondary characters and the actors that play them help prop up the front line folks and this is the case with The Departed. Again, you could have easily had other dudes play Staff Sergeant Sean Dignam and Captain George Ellerby and it probably would have worked out okay. But having Wahlberg and Baldwin play the roles helped to elevate the movie where it worked out much better than okay.

It worked out pretty effin’ great. 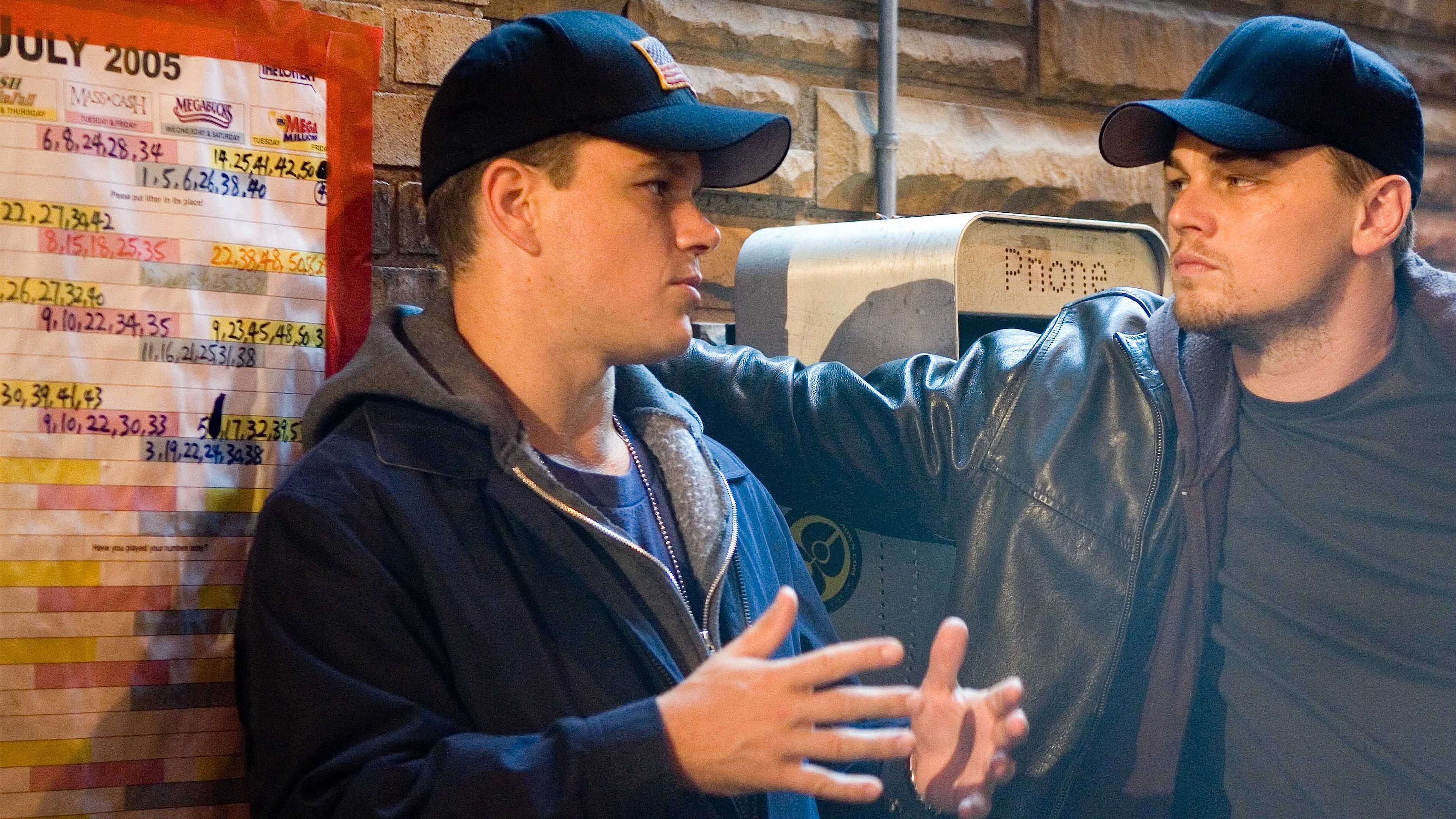 I love the move of using a baseball hat as a disguise. Love it. In real life, DiCaprio does this all the time.

In one of The Departed’s most thrilling sequences, Damon’s character Colin Sullivan is set to meet with Costello at a movie theater. But Sullivan doesn’t want anyone to know it’s him. So what does he do? He wears a hat of course! Now no one will know who it is. It’s just a dude with a hat meeting another dude with a hat, as Costigan is also wearing a hat, albeit a bucket hat. Hats! They are like cloaks of invisibility, baby!

But see Leo’s character, the undercover cop Billy Costigan is wise to the meeting, having followed Costello there and because he also doesn’t want to be recognized, he’s ALSO WEARING A HAT. Smart. Now Costello will have no clue it’s one of his top guys following him as he goes to meet with his main source inside the police department because while it may look like Costigan, it’s obviously not because it’s just some strange dude in a hat that’s also pulled down to obscure his face.

The “That’s A Cop” Scene

That’s all I have to say about that.

The Use Of “Shipping Up To Boston”

Dropkick Murphys had been around for about a decade before the release of The Departed and up until that point, weren’t known all that much outside of the Northeast and certain punk rock circles. But then Scorcese picked “I’m Shipping Up To Boston,” off of their 2005 album The Warrior’s Code and that changed. From that point, the Celtic Punk band would become a household name.

The song, with all of its shit-stomping, whiskey-drenched ferocity and rowdy rambunctiousness worked perfectly both times when it was used in the film, first during the intro and then, later on. Whether intentional or not, it was also a nice little tip of the hat by Scorcese and company to the dear city of Boston, where their picture was set.

Also, it wasn’t a Stones song, which itself is noteworthy, given Scorcese’s penchant for including Stones’ songs in his movies.

Now, if you’ll excuse me, I have some cranberry juice to drink and no, it’s not because of you know, well, yeah, you know.