The Grammys were Sunday night. If you missed the show, all you really need to know is that Bruno Mars won everything, the show was in New York City for the first time in a while and hey, Sting is still alive. That’s about it for necessary information, although if you’re pressed, you can say that Kesha’s performance was incredibly moving, Kendrick Lamar is a beast and just like you know it’s Christmas when Pentatonix comes out of hiding, you know it’s the Grammys when you are reminded that Little Big Town is a thing. No really, I forget they exist and then without fail, there they are, performing. It’s how I mark the passing of time.

Bruno Mars did in fact when a lot of awards Sunday night, including Album and Record of the Year, as well as Song of the Year and Best R&B Performance and Song. By all accounts, Bruno was the night’s big winner. But wait, was he even in a winner in the eyes of Giddy Up America? Our man Kendrick didn’t win any of the major awards he was up for, but he did clean up in the rap category, a small consolation I guess. Missing out on Album of the Year especially is becoming a pattern for Kendrick. In 2016 he lost to little known indie-singer Taylor Swift and two years before that he was beaten out by the French robots of Daft Punk. Let’s just go ahead and say that in 2020 the odds are pretty good that his next album, no matter how amazing it is, will most likely lose out to Ed Sheeran or the inevitable Taylor Swift course-correction album.

But the Grammys are becoming less about winning actual awards for Kendrick and instead, are becoming main stage showcase for his talent and ambition. Opening with him was both a wise choice and a risky choice by the show’s producers, a sentiment echoed during the second Dave Chappelle interlude, when he wondered out loud if this was really on television? CBS no less.

Nope. That’s not your name being called, Jay.

Hov might have been shut out Sunday night, but he came away a winner. This is due in large part to a handful of factors.

First, Sunday morning the President of the United States called him out by name, responding to an interview Jay gave on CNN Saturday. Does it matter that based solely on the President’s tweet, it’s obvious that he hadn’t seen the interview? Nope. Trump’s gonna Trump. But as Sunday night rolled around, the tweet had only elevated Jay’s stature and drew more attention to the insightful comments he made Saturday regarding the current state of black people in America. Smooth move, Don.

And then, during the awards, Jay was essentially in the Oprah seat and in turn, was shown some form of respect by nearly every performer, presenter and award winner. And he responded magnanimously. Almost statesman-like. No one, not even the President, could put a damper on Mr. Carter’s evening.

Hold up, one person could!

Just like with Jay Z, women didn’t do a heck of a lot of winning Sunday night. Only one of the nine awards presented during the telecast was awarded to a women and that one woman was Alessia Cara, who won Best New Artist. When asked about it, Neil Portnow, the President of the Academy, said it was on the women to change that.

Cool dude. Not tone deaf or anything. I can’t wait for you to apologize or “offer up some clarification” sometime Monday afternoon.

But outside of the lack of victories, the night was dominated by powerful women doing powerful things, whether it was Kesha’s goose-bump inducing performance, Janelle Monae’s introduction of her or performances by Lady Gaga and Pink, all of which demonstrated various forms and iterations of steely-eyed resolve and determination.

Before the show Corden admitted that hosting the Grammys essentially entailed eating M&M’s backstage, waiting for someone to come get you and then running on stage, just to bring on the next big name presenter. But with that being said, Corden did a really good job. You could tell he was enjoying himself and that he was a fan, but it wasn’t over the top like someone like Jimmy Fallon is.

Dude, the Grammys were kind of heavy this year. The mood, the songs, the vibe – they were all kind of somber. And I fully realize that things are somewhat tense these days in this country of ours, but if you were looking to escape that for a few hours Sunday night, the Grammys weren’t the place for you. Hopefully you watched wrestling or something instead. With the exception of Bruno Mars’ performance with Cardi B and Rihanna and DJ Khalid’s performance, Sunday night’s performances were full of piano ballads and string sections and choirs.

Why didn’t Portugal. The Man perform? A lively version of “Feel it Still,” which won for Best Pop Duo/Group Performance, would have definitely helped the vibe. And it wouldn’t have been charity to have them perform either. “Feel it Still” was one of the songs of 2018, if not the song of 2018. I understand the need to reflect the times we are living in and respect the uneasiness that comes with it, but we need to come up for air too. Sunday night’s show was all but completely submerged in the deep end of sobriety.

Oh U2. What are we going to do with you? I’m worried that we might need to have an intervention or something. We just can’t keep things going like this much longer. And I like U2. But even I was almost embarrassed for them Sunday night.

Playing in the now coveted Spot for Rock Bands, U2 elected to play outside, on a barge, in front of the Statue of Liberty. They looked cold. They looked like a U2 cover band, acting the way U2 probably would in that situation. Was their drummer even awake? Has their bassist warmed up yet? Can someone please talk The Edge out of using the headset microphone because he looks ridiculous? Bono has never been one to shy away from heavy-handed acts, but yelling out into the night sky through a megaphone painted like an American flag was possibly even too heavy-handed for him.

Of course, U2 was nominated, so it…hold on, no, they weren’t. Okay, well at least they’re, somewhat still relevant, which is more than I can say for Sting, who appeared so many times on Sunday’s telecast I started to wonder if he was now the second lead on NCIS or SVU or CSI or some other show with just letters in the title that I don’t even know about. Dude, what was that all about? First he was doing a Carpool Karaoke bit with Shaggy and Corden, which was okay, then he performed “Englishman in New York,” which was originally released in 1987, with a few bars from his new collaboration with Shaggy mixed in.

Then he presented. For all we know, he was working lights backstage and handing out envelopes to presenters too.

Elton John also performed and while his version of “Tiny Dancer” with Miley Cyrus was nice, that dude couldn’t get off the stage fast enough. I actually thought it was kind of funny.

Speaking of interventions, someone should have said something to DJ Khaled after he agreed to perform. Something like, “hey, want to set up behind some turntables or something? You don’t even need to use them. Just stand behind them. You know, because it’s not like you’re singing or dancing or anything. You’ll just be standing there. That’s weird. So, let’s get you a rig to stand behind.”

Country music deserves better than what happened Sunday night. I’m talking about Hailee Steinfeld and Donnie Wahlberg donning cowboy hats when announcing the winner of Best Country Song. That was just in poor taste. For God sakes, the winner of the award, Chris Stapleton, didn’t even have a hat on. But these two jackasses did. And Hailee Steinfeld was a contender for best dressed, too. Talk about an idea that should have been shelved upon conception. 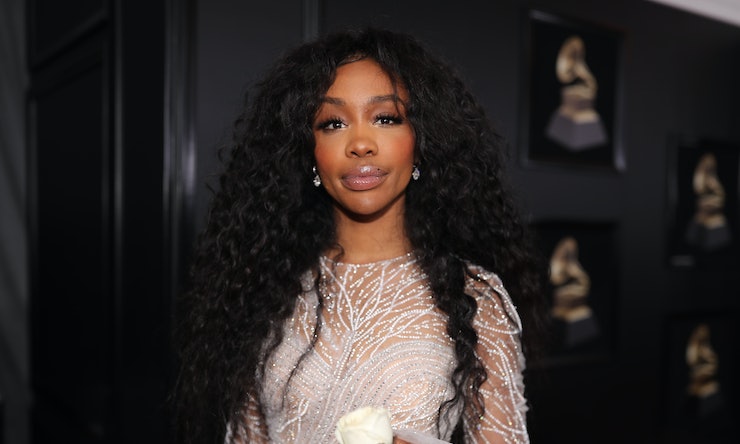 Nothing for SZA. Really? I’m not even a big SZA person, but even with that being said, I find it super surprising she was shut out.

I swear rock music is still a thing. I swear it.

Like Loading...
‹ ‘SNL’ Opens Up the Vaults for Will Ferrell’s Return and It’s Glorious
Of Course the Bowling Matters! ›