Home › Music › Should We Be Worried About The Roots?

Should We Be Worried About The Roots?

Remember that time when your friend started dating someone? Remember how at first, everything seemed cool and nothing had seemed to really change? Remember when they started not being around as much and when they were, they weren’t really themselves anymore? Remember how every so often, you’d catch flashes of what they were like before they were in this particular relationship and how those glimpses were almost bitter sweet? They were a welcome reminder of the past, but also a painful reminder that it was just that, a reminder of the past. Remember how there came a time when you started to come to the realization that your friend would never be the same, your relationship would never be the same and it was time to accept that and move on?

Have we reached that point with The Roots?

The Roots first teamed up with Jimmy Fallon back in 2009, agreeing to become the house band for his first foray into late night. The move was a curious one and was met with skepticism and mild concern. The main question was how would the band be able to continue to be The Roots while now having a full-time day job. The Roots attempted to pour water on those concerns, assuring people that they’d be able to do both, but assurances are comforting, but will also only go so far. Guarantees are what make folks sleep well at night. That and strong cold medicine. And a nice pillow.

To their credit, the band has managed to produce quality music in the years since setting up shop in 30 Rock. In 2009 they dropped How I Got Over, which was probably their last true hip hop record. That was followed up by collaborations with John Legend, Booker T., Elvis Costello and Betty Wright, plus two more Roots’ albums: 2011’s undun and 2014’s …and then you shoot your cousin. In 2016 they dropped “Champion” and contributed music to the Hamilton mix-tape. And then last summer, Questlove was heard saying that the group had over 200 songs ready for a new album and they also had a new song featured on the soundtrack for the movie Detroit. They’ve continued to do their annual Roots Picnic each summer in Philadelphia and tour when they have the time.

So all things considered, The Roots are still out there doing their thing.

We should no longer be concerned.

While it’s comforting to look back at their past few years and lean on the albums they released, it still feels like more and more distance is being created from The Roots we used to know from The Roots we know now. A shift has happened. Just like when that friend of yours, now settled into a relationship and wearing different clothes and eating healthier, comes to hang out, something feels off, something almost feels forced.

Now, when we get these moments where the old Roots seem to reappear, whether it’s when Black Thought drops an epic 10 minute freestyle on Hot 97 or when the band treks up a flight or two to play Seth Meyers’ show, it veers more towards the idea of what was as opposed to what is. That Black Thought freestyle would have made noise regardless of when it happened, but I can’t help think part of what it helped it become the viral smash it was, was due in large part to the fact that it served as a reminder of what kind of boss rapper he is. He’s not just the dude who raps about Game of Thrones or The Bachelor on Fallon’s show, nor is he that familiar looking pimp on The Deuce. Black Thought is one of the meanest, baddest rappers alive. He never stopped being that, he just hasn’t come out to the playground all that often anymore to remind everyone he could still ball.

The association with Fallon, once it got going, had some negative effects to it, but nothing super damaging. Yes, being on The Tonight Show did occasionally cast them in a less than serious light, but silly is easy to stomach. Silly isn’t a dis-qualifier in this regard. The fact that the band could make a joke or two or back a pop singer with classroom instruments wasn’t going to have that much of an impact on how serious we took them as musicians. If anything, it would mean that whatever they came out with might require a second or third listen to before passing any kind of judgement. You’d have to get past the TV-version of The Roots and reacquaint yourself with The Legendary Roots Crew, a feat that wouldn’t be all that hard to do.

Yet what has made it a little harder is that the association with Fallon has continued to be a silly one despite the changing landscape in late night television. Fallon’s show, an adult playground from the jump, was fine in the pre-Trump world. It was easier to laugh then. The stakes were lower. But in the past year, late night hosts who have dared speak truth to power have risen in prominence and have become trusted and welcome voices when it comes to dealing with this current iteration of America, one significantly darker and more negative than the one we lived in a year ago. These hosts, Seth Meyers, Stephen Colbert and Jimmy Kimmel, have seen their ratings grow as a result. On the flip side, Fallon has seen his ratings dip, a response to both his desire to not get his hands dirty when it comes to political comedy and the memories of his infamous Trump hair tussle.

There should be concern that as Fallon stumbles, he could be taking The Roots down with him, especially when it comes to the band’s future musically. Let’s say that when the band finally does release a new album, it’s an album politically charged and full of criticisms of Trump and shots at his policies. At any point would the fact that the band stood by silently as Fallon both humanized Trump and then ducked opportunities to use his platform to attack him be seen as a negative? If we’re going to go after Fallon for his actions(and inaction,) then The Roots standing there by his side could be seen as them being complicit, comfortable with his decisions and choices. How could they then be taken seriously as musicians speaking their minds and lobbing critiques of Trump given their association with Fallon? They could be viewed as opportunistic, only willing to speak their mind when it fits with what their trying to do. That’s not a good look for anyone, regardless of their profession.

It’s not as The Roots have never taken a stand while backing Fallon. In 2011 the group, Questlove in particular, came under fire for their choice of walk-up music for former congresswoman Michelle Bachmann, electing to go with “Lyin’ Ass Bitch” by Fishbone. The obscure track went unnoticed at first, but you can’t sleep on the Internet’s ability to call attention to even the most random of slights. The decision almost cost the band their job and would have had the “scandal” not blown over so quickly. It did however result in Questlove agreeing to have all of his musical choices approved by NBC before using them. Since then, the band hasn’t much dabbled into controversial waters, a move that is befitting of the show’s vibe and modus operandi of the show’s host. 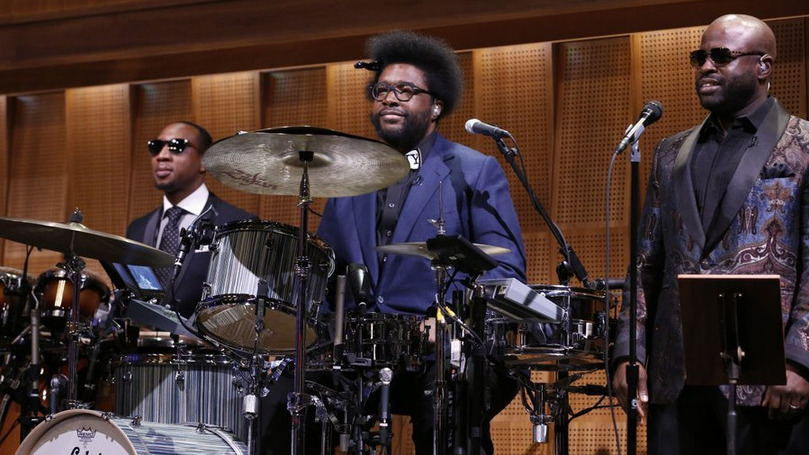 Of course this could all be much ado about nothing and when the time does come when The Roots drop a new album, their association with Fallon will only be noticeable when they’re given the opportunity to serve as the show’s musical guest for an entire week, something they did when …and then you shoot your cousin came out. They could release an album on Friday, do some shows that weekend and be back at Fallon on Monday, business as usual. Questlove has deserved the benefit of the doubt, especially when it comes to time management and as the Hot 97 freestyle proved, Black Thought still has some gas in the tank.

Tags: questlove, the roots, The Tonight Show with Jimmy Fallon