Home › Bachelor Nation › Is This Thing On?

Is This Thing On?

Someone went home. She was a woman. She was blond. She was pretty. That’s all I got. Although thanks to Twitter, I learned that her name was Lauren, one of the 5,234 Laurens currently vying for Arie’s heart, a heart full of nothing but talk of racing cars and cars that race and drivers that raced cars and when the mood strikes him, impulses to wear high socks with low-cut Chuck Taylors. No really, that happened. I don’t know about you, but I’m going to come out and say it, Arie is kind of a dork.

I also think we need to take a moment to seriously question whether or not Arie really wants to even be on this show or not. I’m growing more and more skeptical with each episode because I’m going to be honest, the dude just doesn’t seem to be giving it his all. Or maybe he is? Maybe his all is a better Bachelors’ half speed. Ben Higgins battled a parasite during his season and was in pretty rough shape because of it, but this information didn’t become public until later because Ben was a gamer and knew what he signed up for. Sometimes I’m not sure Arie even knows what he signed up for. I think someone, probably the smooth talking Chris Harrison, talked him into doing it, saying it would help that real estate career he loves so much and in the process, he’d be able to make out with some ladies and go to dope places like wine country.

Arie, most likely wondering what those cameras are for

OR…maybe Arie knows exactly what he’s doing and because of that, doesn’t really give a shit when he doesn’t have too. Then, that game plan is only magnified once he has a few drinks in him. Arie’s poker face is so bad you almost wonder if it is a poker face because there’s no way that someone would have that telling of a poker face unless maybe it was their poker face. It’s confusing, I know, but Arie might also secretly be a serial killer (I’m not ruling out this possibility) so we have to consider everything.

This week started with a group date because without counting, I think there are something like 20 to 45 women still in the running. At this point there are only who have names that I know and even fewer have a personality trait I could point out.

Chelsea: from Maine, has a kid, was the villain in the first episode, but largely marginalized since.
Bibiana: spicy firecracker from Miami who put Krystal on blast and is definitely not long for the show
Krystal: the villain
Brittany: very nice, big smile
Seinne: seems too good for this nonsense
BeKAH: 15 years old
Annaliese: BUMPER CAR TRAUMA

Oh, but Annaliese not only suffers from the crippling and massively under-reported disorder known as Bumper Car Trauma (BCT,) but also apparently Dog Trauma. To be fair, Dog Trauma is like, kind of a real thing. We all know someone who has had a sketchy encounter with a dog. Maybe they’ve gotten bitten or almost bitten. Either way, people are afraid of dogs. It happens.

However, the problem here is that last week it was bumper cars and this week it’s dogs. The plausibility of a fear of dogs or an uncomfortable relationship with certain breeds of dogs is high and very real, but poor Annaliese’s fear of dogs was met with eye rolls because of the whole, you know, Bumper Car Trauma Incident of 2018. As soon as she started talking, everyone, and I mean everyone (don’t deny it and say you didn’t, because you did) giggled, straight up giggled. I personally haven’t giggled in a minute, but when she started in on a fear of dogs, I giggled because of course she’s afraid of dogs, or more specifically, has a form of trauma related to her fear of dogs. Fool me once, shame on someone and fool me twice, like, whatever, that shit’s kind of funny.

Not as funny was the predictable crash and burn Annaliese would later experience, driven in large part by her growing obsession with being one of the last ladies who has not kissd Arie. For as unnatural as a show as The Bachelor or The Bachelorette is, for some reason the show has no time for unnatural attempts at kissing. It’s weird. Everything else is completely staged and produced and contestants are routinely egged on to make grand gestures to win the Bachelor or Bachelorette’s heart, but when it comes to kissing, forcing the issue is always a major stumbling block. It never goes well. Never. Anyone who has ever watched a season of either show saw Annaliese’s demise coming a mile away.

It’s a shame. As stated previously, she was one of the few ladies whose named I knew.

Someone’s name I know now is Caroline. I know Caroline’s name now because she might be my favorite. I don’t know if she’ll win, I don’t really care if she’ll win. Now I’m thinking she could be the next Bachelorette and that’s what is really important here. Do we really care who Arie ends up with and eventually breaks up with in a couple months?

Plus the winner will likely have blond hair and Caroline has brown hair. Case closed. Caroline for next Bachelorette! Let’s get this started now. #carolinefornextbachelorette. It’s a little long for a hash tag, but we have some time to work out the kinks. 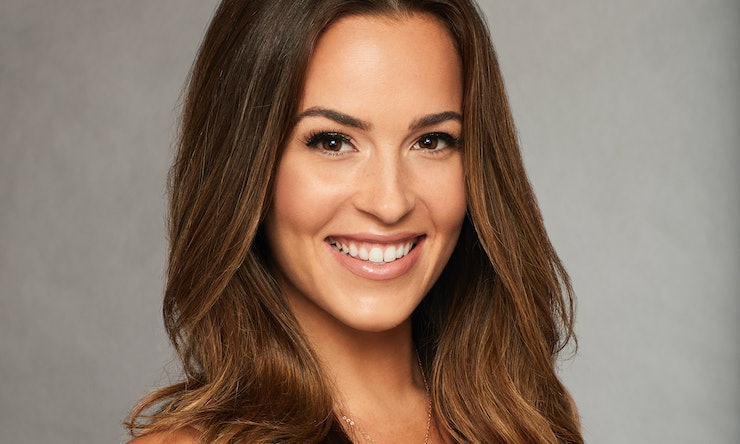 New favorite (for next Bachelorette): Caroline

I for one really appreciated Caroline straight up leaving the room as Krystal was going off on one of her tutorials about the best way to woo Arie as opposed to the wrong way, which were likely employed by the women who went on the date to the vineyard and NEVER RETURNED. Is Arie a serial killer? No, of course not. But he did go to a remote vineyard with a woman and then she was never heard from again. Just saying. You can’t say that that’s not something a serial killer might be mixed in.

Krystal is not a serial killer (I think,) but she’s definitely stolen the role of villain from Chelsea’s hands. Chelsea didn’t even have time to get business cards made. Real shame. Now she’s just chilling on the periphery talking about being a parent and exhibiting minor villainous traits without much payoff. That’s not what Mainers do, Chelsea. Mainers just effin’ do shit. Get your man, Chelsea. Krystal is from San Diego. I’ve been to San Diego and while yes, it is a fantastic place, it’s soft living compared to Maine living. Toe to toe, Krystal would get demolished by Chelsea.

Sadly such a confrontation seems a little far off as Krystal seems uninterested in any direct confrontation with anyone in particular. She’s just firing blind, hunting for rabbits in a coal mine. The best part of last night was definitely when Krystal announced her intention to be more aggressive, something I can 100% get behind.

I don’t even know how she could pull that off. She already seems to be acting pretty damn aggressive. What would then be more aggressive? Stealing Arie three times during a cocktail party? Four times? Just stealing him all together and never returning, leaving the crew and ladies wondering what the hell is going on, turning to Chris Harrison for advice and then dismayed when smooth-talking Chris Harrison has absolutely no advice?

That could actually be it. I think Krystal might kidnap Arie. We can all tell she has the upper body strength to do it. Did you see that painfully awkward wrestling date? Krystal was a wrecking ball out there. She could have probably beaten old friend Kenny King on her own, as opposed to Arie, who definitely only won because Kenny took a dive. Kenny is a good dude. I always liked him. I’d like to say he seems like he’s doing well post-Rachel, but is appearing on an episode of The Bachelor for a few minutes and getting pinned by Arie “doing well?” I’m not sure. Would have to check on that one.

No way BeKAH can be considered a long-term front runner, mainly because it looks the age thing comes up next week and unless Arie is a total creep, he’s going to have a problem dating a minor.