Welcome to another season of Giddy Up America’s Game of Thrones Plot Line Power Rankings. When we last danced this murderous tango, our good friends the Lannisters held the top spot, thanks in no small part to Cersei’s ruthless massacre and seizing of power after the suicide of Tommen. I don’t totally understand lines of succession, but wouldn’t Ser Pounce have some sort of legitimate claim to the throne?

But now we’re back and even though I’m currently on vacation in Maine, living my Martha Stewart-like best self, through the magic of a free trial of HBO Now, the Wife and I were able to watch Sunday’s premier. I even enjoyed a pretty wonderful fried haddock sandwich and a handful of stellar Maine beers in the process. You can learn more about this in my upcoming series on the Travel channel called Traveling With a 2 Year Old is Both Heart-Warming and Driving Me to Drink.

If you are not familiar with our plot line power rankings, it’s pretty simple. Game of Thrones routinely juggles at least a half of dozen plots at one time. So I then rank them based on how interesting they are, how entertaining they are, how important they are and how annoyed I am that Ed effin’ Sheeran appeared in one of them.

And before we begin, our song of the week, brought to you by Geary’s Summer Ale.

Let’s get this show on the road. 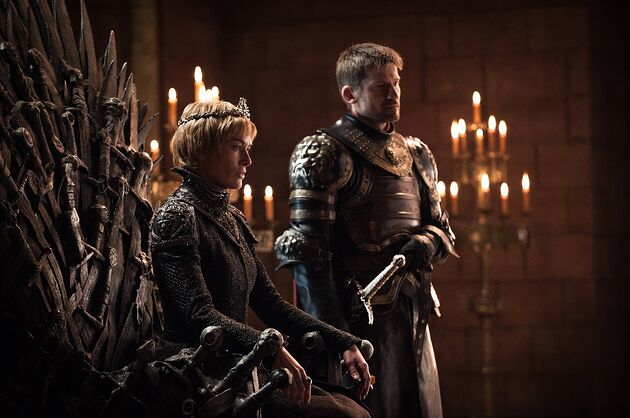 Meet Jon Snow, brooding, devilishly handsome, excellent fighter and newly crowned King of the North. Jon likes a decent ale, Death Cab for Cutie’s earlier material and red-headed women who may or may not want to kill him. Jon dislikes cats, zombies and a poorly-cooked mutton.

Now meet Sansa Stark. Sansa has become beautiful to the point of it being weird the show doesn’t talk about it more and empowered by a few hard years of God awful living and demonic husbands. Sansa likes revenge, telling it like it is and effin’ with Littlefinger’s head(s.) Sansa’s dislikes are arranged marriages, the senseless killing of dire wolves and stupid ass dudes not listening to her.

This is your new North power couple folks and guess what, it’s going…okay. Not great, not terrible. Sansa feels she should be listened to more, Jon feels like if the conversation isn’t about the Night King and his zombie army, the conversation isn’t worth having. And then there’s Littlefinger lurking about, trying to whisper not-so-sweet nothings in Sansa’s ear. Littlefinger is the worst. He’s like a sixer of blueberry beer. Cool at first, but it gets old fast. Let’s just hope he dies soon. Can Brienne kill him? That’d be fantastic.

Jon is gearing up to defend the Wall and the North, dispatching our good friend Tormund to the East Watch castle that is most likely on the Night King’s hit list. Jon isn’t paying any mind to Cersei, though, something Sansa feels is problematic. Hey, me too. Yes, Cersei isn’t a zombie ice king, but she shouldn’t be taken lightly. Sansa had some good points, Jon had some good points. Let’s just leave it at that.

Arya returned to Westeros at the end of last season and subsequently murdered Walder Frey and his two oldest sons. It was great. She made a pie, sliced his throat. All that training really paid off. So it was a little odd at first when Sunday’s episode started with none other than Walder Frey addressing a collection of his best nimrods, jackasses and bungling idiots. Was this a flash back?

Well, it seemed like it might have been until he said it was his second feast in a row. The first one was the one with the Lannisters after Jaime fixed the Freys pesky Blackfish problem. Arya killed him at the end of that so…ARYA IS DOING FACE SHIT AGAIN AND SHE’S DRESSED UP AS WALDER FREY!

Hold on though. How does she sound like Walder Frey though?

Yeah, I’ll guess we’ll yadda yadda that for now. Regardless, great way to open the season and while I think Arya’s role this season is still very much TBD, it definitely cemented her reputation and street credit.

Now, can she kill Ed Sheeran next? Please. What the hell Game of Thrones? You’re like, the most popular show on television. You don’t need to beg for eye balls by adding Sheeran. A rare misfire on their part. But hey, you know, have Arya kill him and all will be forgiven. I can wait.

2b.) Stop Dragon My Heart Around

Finally our girl Daenerys is in Westeros. Can we talk a moment to appreciate that? How many times did we have doubts about our beloved Dragon Queen as she traveled in circles back in Westeros, with only the occasional Internet-breaking mic drop moment sprinkled in? I’ll tell you – at least five.

But now she has landed in Dragonstone and I thought the lack of dialogue throughout her landing was as good of a move as adding Sheeran was as bad of a move. This was a big moment- for her, for us, for the staff at Dragonstone, who must have been closed to The Shining levels of insanity since Stannis peaced out. Yes, she could have just gone straight to King’s Landing, where it probably wouldn’t have been all that hard to take down Cersei, but it makes sense that she re-establishes herself as a full-time resident before looking to make changes.

3.) The One Where Sam Reads Books

Good old Sam is in his first year of maester school and it’s going about as well as to be expected when you’re in your first year – shitty, literally. You would have thought the maesters would have been better than that than to participate in hazing. Get it together dudes. It’s 2017. No one does that shit anymore.

They do actually. It’s kind of a big deal because someone usually dies and then it becomes front-page news.

Anyway, Sam wants to get to work but Old Maester McOscar Winner will have none of it. Is it because he doesn’t believe him? No actually. Dude fully believes Sam. The problem is that he seems to be not quite grasping the severity of the situation, resting on the idea that Westeros has faced full-blown destruction before and survived. So what’s to think that it won’t this time. Weird, I feel the same way about Trump sometimes. Not to equate Trump with the Night King, though. That wouldn’t be fair to the Night King, his approval rating is at least 80%, if not higher.

The big news here is not that Sam cleans up bed pans and serves lunch, it’s that he happened on the one book he needed to and know nows that beneath Dragonstone, the same place Danys just landed, is a mountain of dragon glass, which is really the only thing that can kill White Walkers. This is kind of a big deal, folks. I didn’t think Jon and Daenerys would meet for a while. This changes that. I’d give it another episode or two.

4.) Keeping Up with the Lannisters

Cersei is Queen now. Wonderful. But what is she queen of? Jaime asks this and you know, that was a good question. Officially she’s queen of the seven kingdoms, but half of those kingdoms have gone rogue, leaving Cersei to having maybe three under her reign. Kind of a let down there.

It’s cool though, it’s not like Cersei is prone to wild, devastating decisions.

Never mind, then. It’s actually not cool at all. Cersei only has one thing and one thing only to live for now – ruling shit. No kids, no family besides Jaime, who is probably wondering if this is yet another monarch he’s going to have to kill. Cersei is a dangerous animal folks, keep you hands and feet inside the ride at all times.

Only adding to Cersei’s threat level is the involvement of Euron, who in between seasons apparently spent some time playing in a Strokes’ cover band. Sweet outfit dude.

All I’ll say is this…if The Hound comes full circle and becomes a good guy, it is the best redemption story of the whole show? I think it might be.