Review: The Ghost of Paul Revere Live in Asbury Park

It was an unseasonably warm Saturday night in newly refurbished Asbury Park, New Jersey. Temperatures at game time hovered around the 80-degree mark. The bars and restaurants along Cookman spilled out onto the sidewalks – 40 minutes to an hour-long wait for one of those prime outdoor tables. Truth be told, we hadn’t had an especially rough and tumble winter here in New Jersey, but at some point it doesn’t matter. When you get that first real summer-like feeling spring day, all bets are off and whether they are wrinkled or not, the shorts come out to play. Sunglasses are extra important because those pasty white thunder thighs are sure as shit hard on the eyes.

The Ghost of Paul Revere, holler folk troubadours from sunny Portland, Maine, were in town, opening for Texas southern rock gunslingers Jamestown Revival. With all due respect to the traditionally country dude handsome fellas fronting the headlining act, I personally was there to see The Ghost. 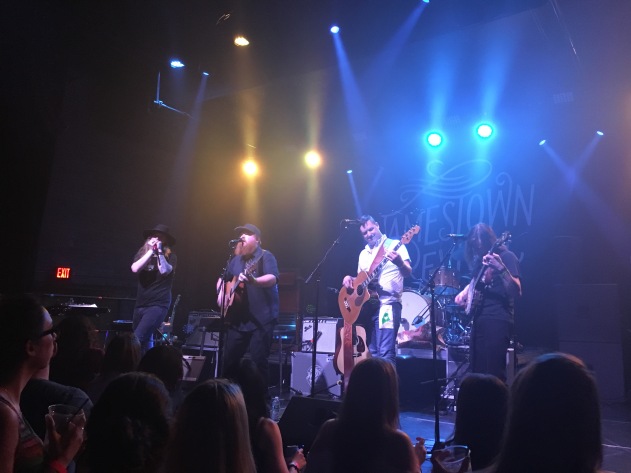 But first, a quick aside about leaving.

Specifically, me leaving and even more specifically, me leaving the great state of Maine, which I did at the tail end of the summer of 2006. A true Mainer may physically leave the state, but in reality, Maine never leaves you. It stays inside you, residing a shade to the starboard side of your heart, and is nestled deep within the cozy confines of your rib cage. So while I currently live in New Jersey, in a sleepy beach town a few clicks south of Asbury, in my heart if you were to ask, I’m from Maine. And as a result, I keep up with the scuttlebutt happening six, seven hours north of me, especially when it comes to the beautifully rich music scene of Portland. For the past couple of years, I had heard about this group, The Ghost of Paul Revere, but it wasn’t until recently when I heard “Ballad of 20th Maine” did I get fully on board with them.

Fast forward to a short time later, I saw they were playing close to where I live and that’s that.

That is how we got to Saturday night.

The band opened with “a song about girls,” “Hey Girl” and the crowd, which was at that point, was largely pedestrian and still arriving, turned their heads toward the stage. I bet it can be hard sometimes making people who aren’t there to really see you stop and take notice without the benefits of loud electric guitars and drums. I would also bet that the four members of the Ghost, or three plus a ringer, as long-time harmonica stud Matt Young had recently departed and in his place was Jackson Kincheloe of Sister Sparrow & the Dirty Birds, would laugh off that bet and double down on the power of their three-part harmonies and ability to pack a punch with two acoustic guitars, a banjo, and harmonica.

The Ghost strike me as confident bastards, something I would consider a compliment coming from one Mainer to another.

That confidence became glaringly apparent when they followed up “Hey Girl” with a Bruce Springsteen tune, “Atlantic City.” Let’s be honest, it ’twas a ballsy move, gents. Asbury is the home of the Boss, his spirit is a mainstay in the town regardless of the weather. Only a week or so earlier he had been spotted at a Steven Van Zandt show just down the road. He is known to casually appear at places with the frequency of a beloved uncle. Perhaps The Ghost thought maybe, just maybe, he might be around that night. Or perhaps they just said screw it, we play a pretty mean version of “Atlantic City” and it’d be fun to play in the Boss’ home stadium, Asbury effin’ Park. Either way, I was sold, and I think the crowd, getting bigger as the minutes passed, were as well. 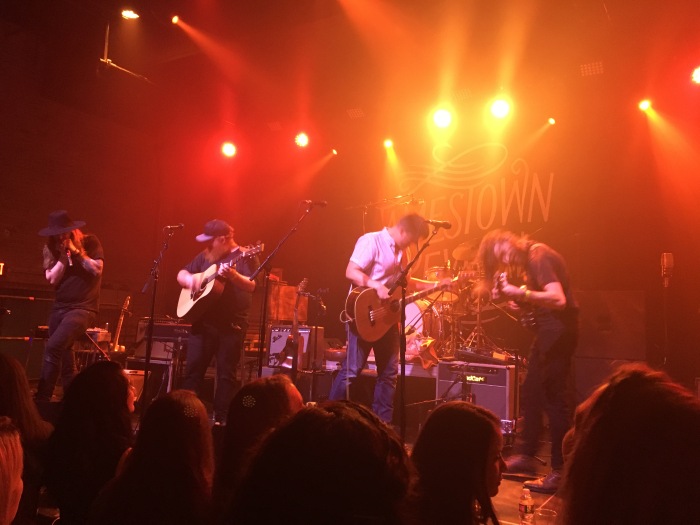 Some songs off of their upcoming album were well-received, but you could tell the older songs were more comfortable and familiar to them, as tunes like “San Antone” and “Fire in the Sky” were played with a looseness and spirit that was damn well endearing. The set’s mountain top peak was “Wolves,” which was prefaced with bassist Sean McCarthy inviting the audience, now fully onboard with the band, to “get weird with them,” a request that was gleefully accepted and complied with. DUDE, “WOLVES” WAS SICK, I thought to myself and was still thinking as I woke up this morning.

Rounding third and headed into home, the band bid the crowd adieu with their cover of The Who’s “Baba O’Reilly” and I’ll tell you that if you were there to see Jamestown Revival and up until that point was at best mildly intrigued by these four dudes hollerin’ their folk music at you for forty minutes, you were into it now. Like into it into it kind of into it.

How could you not have been? You’re at a show like the show I’m talking about and at it’s heart, it’s an effin’ rock show, and “Baba O’Reilly” is one of the best pound for pound rock songs ever presented to us lucky sons of bitches. You like that song whether you know it or not. So when a band of eager beaver Mainers bangs out a wildly original version of it, you can’t help but tip your hat to them, hoot and holler, stomp your feet and give those bastards a heartfelt round of applause.

Yet I keep coming back to this idea of confidence.

I took some notes during and after the show, but for the most part, they consisted a bit about how this harmonica-playing ringer from another band had joined up only a few days ago and had done so without ever practicing with them as well as the single word “confidence” written two or three times. The Ghost of Paul Revere are a confident lot; confident to the brink of cocky, but cocky in a good way, not a bad way. They play their songs with the pride of a craftsman showing off a canoe he just built to a friend or how a husband shows off the end result of a day of yard work to his wife. I’m biased, but I think it’s a Maine thing. Mainers know when their shit is the real deal and will gladly tell you ad nauseam, but will do so the most reassuring way possible. It’s a statement of fact, not a statement up for debate.

This is also a statement of fact: The Ghost of Paul Revere played a wicked awesome show Saturday night and I’m damn glad I went.

This is another statement of fact: I’m excited to see what the future holds for them.

And this is one last statement of fact: I live in New Jersey, but I’m from Maine.