Home › Television › Six Reasons Why Top Chef is the Best

Six Reasons Why Top Chef is the Best

On Thursday night Top Chef comes one episode closer to wrapping up it’s 14th season. This season has featured eager, beaver rookies and battle-tested vets who are returning to the show for a shot at a redemption. What at first seemed like a risky move has paid off. The strongest rookies rose to the occasion, while the vets who might have lost out due to a small misstep or simply being out-cooked, got a second chance they deserved.

In the end, the fact that three vets are in the finals isn’t all that surprising and neither is the fact that it’s totally okay that they are. The reason why is also one of the reasons why Top Chef has become the best reality competition show (or whatever the genre is called these days) out there. Top Chef is 100% merit-based. You cook the best in a particular challenge and you win. It’s pretty simple and it’s why the show has continued to press on so successfully.

With the season coming to a close, it seems like a good time to take stock of what makes the show work so well and continue to be so entertaining.

It is and that’s awesome. Top Chef literally rewards the top chef in the challenge of the week for being the top chef. Makes sense, right?

Reason 2: It’s all about what you just did, not what you’ve done

Top Chef is a week-to-week operation. How you performed in the previous challenge has no bearing on how you could be judged on the current challenge. This is something that comes into play the longer the season goes on and the more the audience starts to root for a particular chef. If and when a chef does go home, an easy and quick reaction is to point how well they might have been doing. But that doesn’t matter because in the current challenge, they used too much salt or under-cooked something or as is usually the case, eff’d up their seasoning. You don’t biff it on seasoning, kids. Life lesson right there. There’s no running tally of points or score-keeping. It’s all about what have you done for me lately, not what have you done in totality.

Reason 3: The chefs are easy to root for

Me, I’m partial to Sheldon this season. The laid back Hawaiian not only seems like a good dude to hang out with, but is a dynamite chef. Sheldon made it to the final three in season ten and has been super steady throughout this season. My wife likes Sheldon too, but she also has a soft spot for Shirley, a heavy hitting, fire cracker from season 11. Then there’s John, also from season ten, who has grown on me throughout the season and I would be totally OK with him winning, even if it meant Sheldon losing, which you know, it would. But the fact that I’m cool with all three chefs potentially winning shows just how well the show does in endearing them to the audience. They aren’t heavy handed in doing so; they don’t jam story lines down your face. They do it with a light touch and usually do it in context, whether it has something to do with the dish they are cooking, a relationship with a guest judge or some other outside factor. And also, the show has the benefit of casting people who are insanely passionate about their craft and that passion is massively appealing.

Reason 4: The show only casually flirts with cast drama

The chefs have egos, as anyone would who has been as successful as they’ve been. As a result, there are dust-ups here and there. But they are fleeting, they don’t usually last too long. If you want to watch people fighting with each other, there are plenty of options. That’s not what Top Chef is all about.

Reason 5: Because Top Chef is all about the food

Fun fact I’ve learned about chefs from watching Top Chef: they are super nerds when it comes to food. It’s kind of cute actually. Everyone on the show geeks out over food- whether it’s the chefs, the judges or the random people that get to come to these tastings and events the chefs cook at from time to time. Everyone likes talking about texture and color and flavor profiles and how a certain food reminds them of their grandmother. Chefs fawn over other chefs’ food while in the middle of a competition, which is kind of crazy when you remember it’s a competition and they are competing against each other. I think this is one of the things that really separates Top Chef from other shows in the genre – it’s about something, a tangible, definable thing. What the hell is the Kardashians about or the Real Housewives show about? It’s about a lifestyle. That could be anything. Top Chef is about food. That is something. There’s a difference. 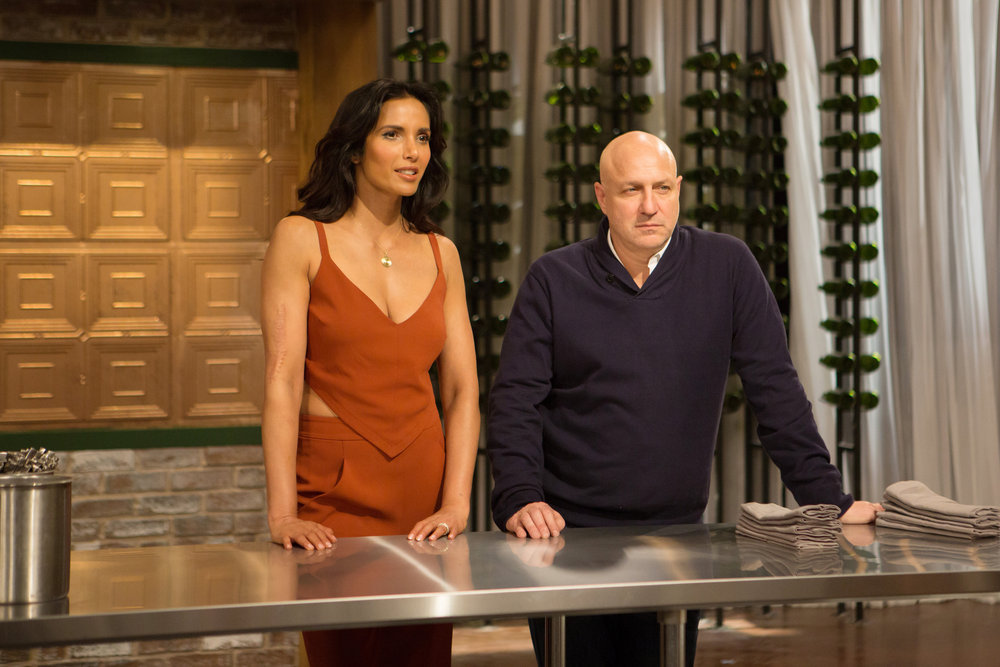 Whether it’s about the food or the process or the chef themselves, there’s a certain amount of care that the show’s exhibit that is refreshing. The show’s head judge Tom Colicchio isn’t messing around and takes this business very seriously. He respects good cooking, he respects the process and you can tell when he’s legitimately impressed. Likewise, you can tell when he’s not. Tom’s disappointment is our disappointment. Also, don’t bullshit Tom. Tom believes in taking responsibility for your actions, good or bad. More often than not, the chef that tries to pass the buck or responds to criticism with excuses, goes home. Why? Because Top Chef is merit-based and a merit-based environment does not respond well to excuses. Also, the show’s host, Padma Lakshmi, is currently rivaling only President Obama in the last months of his presidency when it comes to giving a flying eff. Padma doesn’t hold back and it’s fantastic to watch.