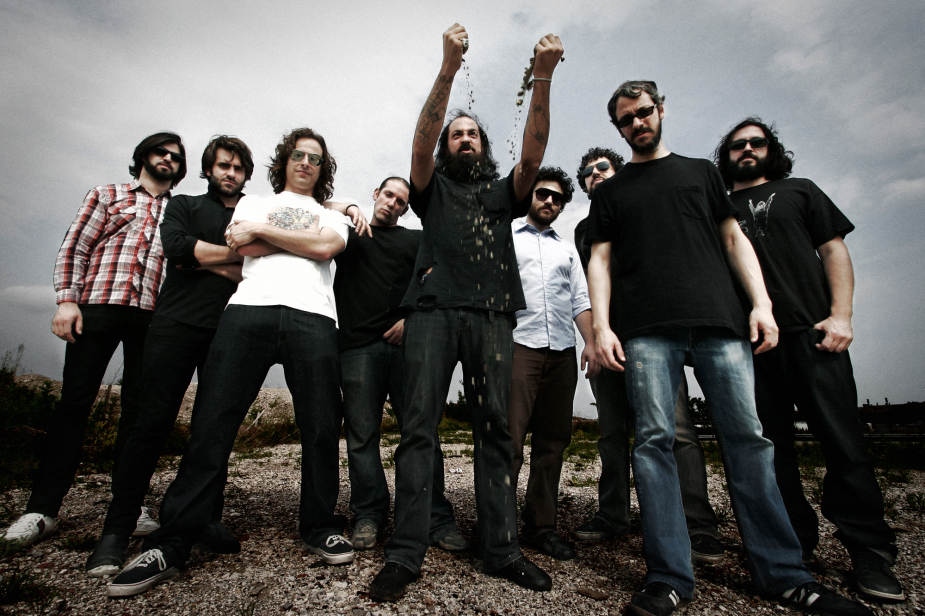 Sometimes you have to ask yourself- what kind of world are we living in when a pumpkin festival in the middle of New Hampshire goes full-tilt anarchy? And sometimes you have to ask yourself- we all stop making Ebola jokes when the number of Americans infected hits five, right? Or 10? What is the number, because at some point it could get uncomfortable.

But amidst all of this gloom and glum and glitches in the main frame, we got some news jams to at least surround ourselves as we peruse the Internets and read about which End of Days is happening today.

The Budos Band, a crew of anywhere from seven to seventeen hombres from Staten Island, have released their latest album, their fourth album, Burnt Offering. It’s the band’s first album to come with a title that deviates from the Budos Band I, Budos Band II, Budos Band III trend they had established and it’s also their first release since 2010. The Budos play a hypnotic form of instrumental psychedelic acidic jazz funk seemingly plucked from 1970’s weirdo space movies that never existed. Their grooves are deep-seeded and burrow far into your bones. Horn parts screech out like wild banshees and drums pound and thunder like garbage cans let loose on the Long Island Expressway.

Part of the Daptone Records collective- a gang of old-school street toughs and rough necks that include Sharon Jones & the Dap Kings, Antibalas, Menahan Street Band, Charles Bradley and the Sugarman 3, the Budos Band are trained assassins when it comes to instrumental jams. Burnt Offering is no exception; another example of what the band describes as “Staten Island instrumental afro-soul.” Although eh…not really. There is a reason why this album isn’t called Budos Band IV and it’s because it’s not more of the same for the Budos Band. They seem to be stretching their legs a little bit with Burnt Offering- more wide open spaces, less tight pockets.

Instrumental music is a dicey proposition. You need to have the right pieces in place to pull it off. Horns help. Keyboards help. The power rock trio are going to have a tough time for themselves, especially if they are looking to do more than one instrumental number. Those dang Beastie Boys are probably the exception, although their instrumentals were usually given a boost by keys or percussion. An instrumental needs something to grab your attention. Just a groove or hook won’t work. It needs to be more- a handful of building blocks working in unison to build not just a foundation, but an inhabitable abode. This is what the Budos Band do. Every member of the band is doing their part, rowing in unison so the ship keeps a steady course. Heavy lifting is shared- it’s not just the horn section, although those dudes are all stars. The keyboards are constantly interesting and on Burnt Offering, creative guitar work steps in to lend a hand on more than one occasion.

Shit out there is weird, man. It’s going to stay weird.

Burnt Offering is a soundtrack of weird.

Learn more about the Budos Band here. And check out Burnt Offering on Spotify.