Home › Music › Let’s Get On With the Business

Let’s Get On With the Business 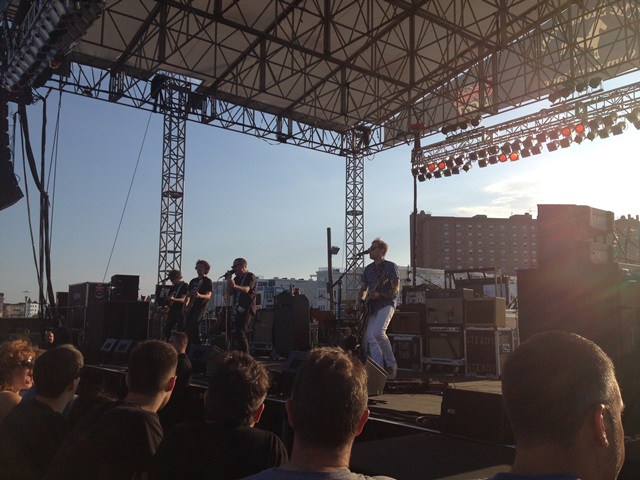 A bright sun overhead, casual breezes coming off of the Atlantic and temperatures in the mid-seventies- it was a perfect night for an outdoor rock show in Asbury Park, New Jersey. The Drive By Truckers and the Hold Steady were in town and beers were reasonably priced. Giddy up indeed.

At quarter after six, which yeah, kind of early, but whatever, Brooklyn indie rockers the Hold Steady strolled on stage. Let the bouncing commence you jubilant white dudes in the audience! And bounce they did. And sing-along they did. And salute the band with their tall boys of PBR, Yuengling and Corona they did. Summer at the Jersey Shore and the Caucasian, Good-Time Havin’ Dudes of America have gratefully descended on this seaside town.

Craig Finn, singer, story teller and occasional guitarist for the band is a pop rock reverend, complete with excitable gyrations and stretched out arms. Finn’s lyrical style has been called narrative, yup, which it is. It’s conversational, with a tinge of you know what I mean. He’s telling you stories, relate-able stories, about drunk girls, junkies, awkward conversations and lonely nights. Among other things. But the crowd gets it. I couldn’t see the throng up front, but they seemed to be sharing inside jokes with Finn, exchanging finger points and raised hands & arms. It was a smaller crowd, but not a crowd that lacked loyalty. This was their It, man. It was happening. It consisted of middle-age dudes playing air guitar, covering their bald spots with beat up baseball caps and snapping pictures with their i Phones that they kept in their cargo shorts. It was definitely a dudes night at the Stone Pony Summer Stage. Ladies were in short supply.

Unfortunately for some, so were sunglasses.

“Everyone who didn’t wear sunglasses is kind of bummed,” Finn said halfway through the band’s set. “I’m sorry to laugh, but it’s kind of funny from the stage.” Those without Ray Bans, Aviators or even a pair of the free T-Mobile sunglasses that were being given out were left at the mercy of the setting sun that sat just behind the band’s drummer. Summer baby! It’s not for the weak. You gotta earn that fun, hoss. 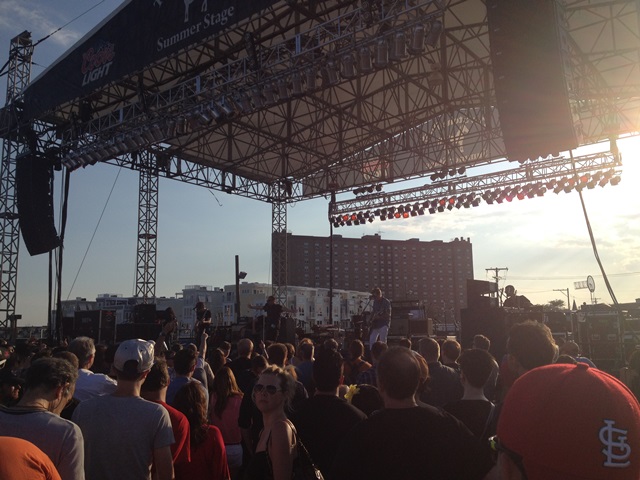 For a little over an hour the Hold Steady raged song after song, dipping liberally into their catalog and playing songs from almost all of their albums. Older songs got the biggest reactions from the crowd- not a surprise. But newer songs from their latest release, Teeth Dreams, were also well received. Dude everything was well-received and rightly so. It was a great set by a professional rock band. The energy never wavered, even when they played a slower song like “The Ambassador” off of Teeth Dreams. If anything, the slight reprieve from the bounce-inducing pop goodness was kind of welcome. Gave us a chance to take a swig from our tall boys. We would continue to be grateful. Highlights from the set were “Sequestered in Memphis,” “Magazines,” “Chips Ahoy” and “On With the Business.”

Finn as a front man is a sight to behold. He is a modern day lounge singer, jeans and a short-sleeved button up shirt aptly replacing a tuxedo. He communes with the crowd, brings them in as if this parking lot were a small club in his adopted hometown of Brooklyn. As their set wound down, he took a moment to give some love to the Drive By Truckers, telling the crowd about seeing them in “2002ish” in New York City and after doing so, immediately decided he wanted to start a band of his own. Now he’s “lucky enough to call them his friends.”

And then the band rounded around the bend with “Massive Nights,” finishing a set that no one really wanted to end. This would be a tough act to follow. But no worries as this was the kind of multi-act show that consisted of lines being drawn, fans of each band represented well and aware of the set times. As the clock closed in on 7:30, the Hold Steady-enthusiasts started to cede ground to Truckers’ fans. No one was leaving, though. Just making room. Grab a fresh beer, hit the head and wait patiently.

As equipment was shifted on stage, you had to wonder- could the Drive By Truckers match the energy of the Hold Steady? 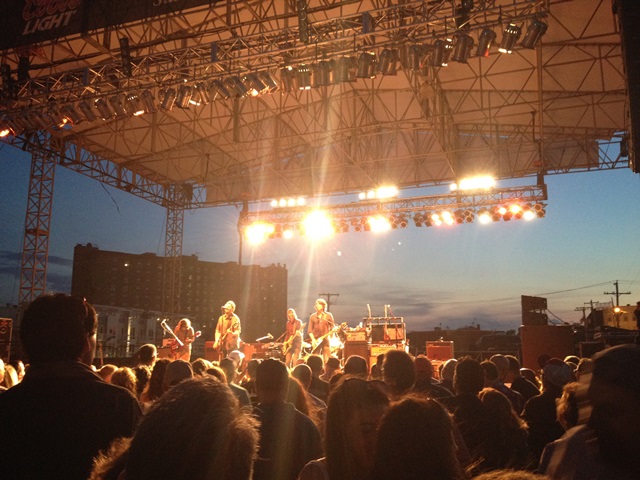 They looked like creatures from another planet. Markedly different looking dudes than the Hold Steady, the Drive By Truckers are a collection of dudes who look like they’ve done some living, seen some shit, have some stories. My darling wife was pretty certain that their drummer was an extra on True Detective. He had a beard that almost touched his snare drum, dark sunglasses, a cigarette hanging from his mouth and an Iron Maiden t-shirt on. Yes, there was a chance that he could have been on True Detective, but I think there’s a better chance that he doesn’t even know what television is.

The Truckers are definitely patrons of Southern Rock and as a result, their set had a markedly different feel than the Hold Steady’s. More down home and traditional rock, with an existing energy, albeit a more subdued kind.  The crowd, however demographically different (the guy next time might have been 700 years old,) was no less excited to be there. Overall it was a great night for air guitars. Not a good night for doobie smokers and over-zealous dancers, though. Stone Pony security seemed to be operating on a 1 to 1 ratio- one security guard for each concert-goer. They roamed the crowd like vampires and paths cleared for them politely. Just doing their job- I get it. But it could be noted that the crowd for the night’s show might be a slightly less troublesome bunch than some of the others the Stone Pony Summer Stage might see this summer. Yeah there was one old couple who lit up a joint, but quickly snuffed it out once they realized that the whole crowd could smell it and security were most likely on their way. Besides that, the danger seemed to be beyond the gates for one night at least. 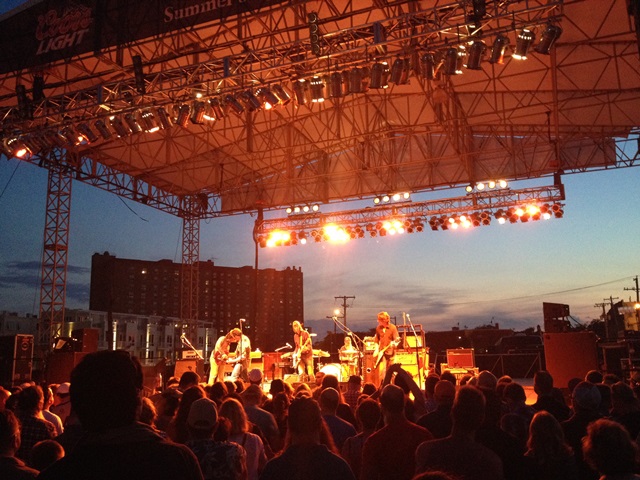 The Drive By Truckers were enjoyable. They were easy to listen to, easy to enjoy. Anyone with even the slightest appreciation for rock ‘n roll would be able to get down with what they were doing. Yet there was something that bugged me about them, that kept me from getting completely on board with them.

Mike Cooley and Patterson Hood are the co-front men for the Drive By Truckers. They split duties when it comes to the lead singer/lead guitarist role and it seemed that the set was constructed in a way in which they alternated songs- hence the tone of the band’s set was uneven. Cooley had a smoother style, one more seeped and cloaked in traditional country and non-traditional alt-country. Hood was rougher around the edges and his songs were more rock than country, more Skynard than Waylon. The difference, which most likely wasn’t designed too, prompted some decision making on my part- made me choose which band I liked better- the one led by Cooley or the one led by Hood. I ended up on Team Hood. I liked the garage-smelling rank and dirt of it. It had more life to it. And this is not a dig at Cooley at all. I was cool with his songs too. I just preferred Hood’s.

I ended up spending the rest of the Truckers’ set thinking about the whole dual front man thing. The Beatles pulled it off, but really, they seem like more of an anomaly. Other bands who split time on the louder microphone fall more in line with the Truckers in that by doing so, they make you choose. You might not even realize you’re doing it, that you’re mind is shifting into decision mood. But I think it’s a natural. When there’s in a difference in something, you inherently think about what side of the difference you prefer. I brought this up a couple weeks ago when talking about Jack White’s new album– how White goes back and forth between styles, personalities, backing bands and reprehensible remarks about other bands. Doing so makes you choose which Jack White you like and which one you don’t. When it comes to music, I don’t want to choose. I just want to enjoy a band, not a version of a band. By being co-led by Hood and Cooley, Drive By Truckers open themselves up to debate- Team Cooley or Team Hood. It can make an hour and change spent standing in the shadow of the old Asbury Park Casino more confusing than it needs to be. 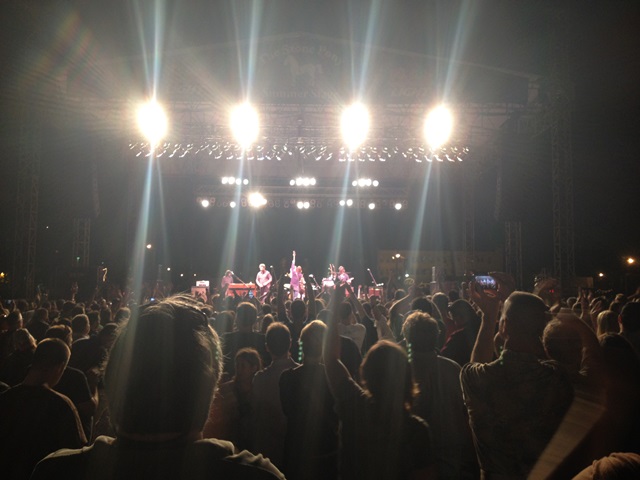 I would go see both bands again, although I’d be in more of a rush to see the Hold Steady again. This is not a knock against the Truckers. Just the truth.

Decisions must be made.

They of all people should know that.