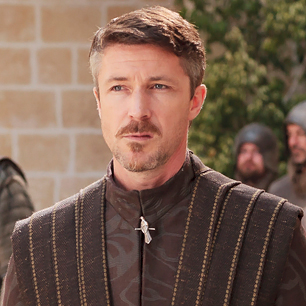 Oh Petyr Baelish, you sneaky son of a gun you.

Let’s just get right to it.

So this week it was revealed that Littlefinger is a much bigger fan of the long con than we could have ever expected when we found out that it was him and not the Lannisters who was behind the death of Jon Arryn. Gasp! I know, right.

QUICK REFRESHER: Jon Arryn served as Hand of the King for King Robert. He died and shortly after, Catelyn Stark received a text message from her sister and husband of Jon Arryn, Lysa, that it most likely was the Lannisters who killed Jon. This essentially was what got the whole series set in motion as Robert then asked Ned Stark to be Hand, the Starks road tripped it to King’s Landing and the rest is history.

Up until 8:59 pm Eastern Standard time, our general understanding was just that, the Lannisters had killed Jon Arryn. Then we started watching last night’s episode and at about the twenty minute mark, we learned that was a lie. Littlefinger was actually behind the murder, having convinced Lysa, who was his little shorty on the side, to throw a few drops of death juice into Jon’s favorite Dornish wine and then write the letter to Catelyn, blaming the Lannisters. I mean, holy shit balls, this is kind of a big deal. I feel so…lied to. And hot sugar britches, what are we to make of Baelish now? He went from fringe role player to power player in a matter of weeks. And we don’t even know what else he was up to!

What Else Could Littlefinger Be Involved With?
The assassination of the Arch Duke Franz Ferdinand
Faking the Moon Landing
The JFK Assassination…but probably not the Lincoln Assassination
Pete Rose getting thrown out of baseball
Leaking the Donald Sterling tapes to TMZ
The Kardashians

I wouldn’t put anything past him now. And adding Lysa to the mix is essentially handing a pyromaniac a case of matches. That lady is a nut job and is clearly not taking her meds. I have to say, Baelish just became the front runner for Wild Card of this season and may have even jumped into the MVP race.

How the East Was Won & Dragons Were Tamed

Last week I was all excited because in the previews for this week’s episode, Daenerys  was seen talking about heading to Westeros. Finally! Getting in the ring! But kids, we can’t trust previews. They lie to us. Sure Daenerys mulled over a trip west with 8,000 of her closest friends, but upon finding out that the cities she had drop kicked her way through and all the slaves she had freed while doing so were back to being slaves and said cities had fallen into bad hands, she chose Door Number 2: stay in Essos. It makes sense, stay in Essos for a little while longer, do some resume building, amp up the Linkedin profile. It’s also the better PR move. Danys’ legend has certainly grown since season one, but she needs it to be a legend with some substance to it. If she were to go to Westeros now and were somehow able to take King’s Landing, she’d be just another occupant of the Iron Throne. No one would be really stoked to get behind her. But if she went to King’s Landing as the Ruler of Essos, that’s another story. She’d be coming with not just the Unsullied, but Testimonials. The word of mouth buzz about the Mother of Dragons would be legit. Much more so than if she were just to cut and run and head west.

My initial reaction to this turn of events was disappointment, but the more I think about it, the cooler I am with it. Any other show and Danys would have already set sail to Westeros. But Game of Thrones is the Littlefinger of television shows- patient and content to play the long game. You do you, Daenerys. We’ll wait.

1. Horray for King Tommen. We literally don’t know anything about you besides you are apparently not a psycho and have a cat. But hey, congrats nonetheless.

2. The Lannisters will be paying their debts in compliments apparently. You know, because they are essentially paper champs when it comes to wealth these days with mines as barren as…well, I was going to make a joke about Lysa and her son still breast-feeding at what must be 10 years old, but I chose not to. Either way, the Lannisters don’t have any money, meaning the union with the Tyrells is super duper important now if the Lannisters want to retain their public standing, which is you know, a little important to Tywin. And by little, I mean, the ONLY THING HE CARES ABOUT.

3. Prince Oberon is a self-described shitty poet. He also only wears pajamas.

Nice new moon, liquored up adversaries and it’s go time for Jonny and the boys! For a second it looked like either Bran or Jon were going to die, but that was fleeting because both are in the first tier of Game of Thrones‘ levels of untouchability.

Wait a second, levels of untouchability?

Yes. Let’s be honest about two things. On Game of Thrones it’s been proven that everyone can be killed, but there’s also some characters that kind of, sort of can’t be killed. Let’s rank them.

Totally Could Be Killed and Probably Will Be, But Maybe Not For a While
Jaime Lannister
Melissandre
Ygritte
Jorah
Darrio
Margaery Tyrell
Granny Tyrell
Mance Rayder
Brienne
Missandei
Tywin Lannister
Prince Oberon

Totally Will Most Likely Be Killed, But Could Maybe Not Be, But It Won’t Be a Surprise If They Are
Bronn
Grey Worm
Sam
Varys
The Hound
Podrick
Roose Bolton
Hodor (Hodor? Yes, Hodor. Hodor)
Lysa Arryn Baelish
Robin Arryn Baelish
The Vision Quest Twins

So that’s the Levels of Untouchability and with both Jon and Bran up at the top, it was slightly lacking in tension when it looked like one might die this week. Both are too important to the story to get killed off. That’s the basis for a character’s level of untouchability- how important to the story are they. I’m sticking by my rankings. Although it should be noted that when I first started working on them, Joffrey was in the second tier. So, I might not be the best judge for this.

Game of Thrones really nails it when it comes to great pairings. Whether it’s Bronn and Tyrion, Jaime and Brienne, Tywin and Arya. They nail it. And this season is no exception. There are currently two quality duos roaming the countryside in Westeros- The Hound & Arya and Brienne & Podrick. Life lessons running rampant with both. Arya once again learned that the old ways have no place in the new world and Brienne learned that there was more to Pod than just a guy who can’t ride a horse. Ease up on the assumptions, Brienne. You know else who can’t ride a horse? Me. And I’m a good guy. Just because someone doesn’t know how to ride a horse doesn’t make them worthless! Damn stereotypes.

Do any of these visions show Bran getting a haircut? Homeboy needs one.