Home › Boardwalk Empire › And the Award Goes to…

And the Award Goes to… 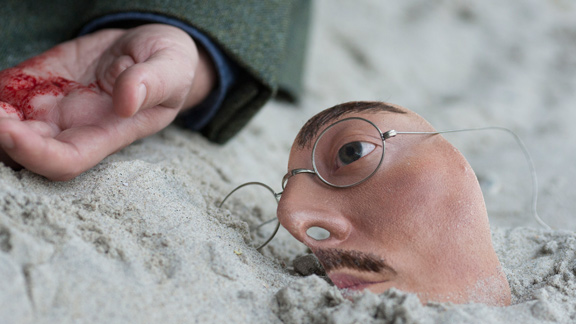 The plan changed around 8:55pm.

Or more specifically, less than a minute after this happened….

So the plan changed and I watched “Farewell Daddy Blues,” the finale of a pretty damn good fourth season of Boardwalk Empire. If you want a recap and an overall good and thorough analysis of the season, I’d suggest this one by Grantland’s Andy Greenwald. If you want season awards, I’d suggest you keep reading here.

Boardwalk Empire has never been able to fully move on from Jimmy’s death. And it is that death, a death that happened two seasons ago, that still drives the show. Our desire for a new Jimmy made it easier to accept Will Thompson’s increased role and the lingering memory of Jimmy is what still connects Richard, one of the show’s most interesting characters, to a story that has moved on without him. Killing Jimmy helped make Nucky a deeper character and was ultimately necessary in the shift from half a gangster to full gangster. After the finale, I think the show is finally able to move on.

Not offense to Gillian, and certainly no offense to the actress who plays her, Gretchen Mol, but anything involving Gillian was by far the weakest part of this season. Nucky’s beach front oasis wasn’t the only albatross this season. Much like with the dearly departed Richard Harrow, Gillian’s role on the show had run it’s course. I could see them checking back in with her sporadically, but thankfully, it seems like we’ve moved on.

Rookie of the Year: Will Thompson

Now that he’s back to being the head of the family, I’m guessing we can put those Next Jimmy Darmody predictions to rest. Right? Right. But maybe? Yeah, maybe.

Out of the weeds and into Al Capone’s inner circle. Not bad. And now he’s got a little buddy to hang out with- Eli Thompson. Together, their grumpiness will know no bounds. Team Buzzkill is most likely going to help make the action in Chicago more relevant to whatever main story is happening in Atlantic City next season.

I am more interested in Boardwalk every time Rothstein appears. He’s easily the best character they have on their very deep bench. I will now resist the attempt to Google Rothstein for fear of spoilers.

As annoying and off putting as the character was, you have to hand it to him- homeboy knows how to orchestrate a power move.

Coming into this season, I expected Chalky to come into his own. But the reality of it is that Chalky spent the majority of the season on the defensive- whether it was fighting off the creepy spirit fingers of Dr. Narcisse, putting on a happy face on the home front- a place he seems to always feel like an outsider in or surviving the one way friendship he has/had with Nucky. Past seasons have seen Nucky under attack. This season, it was Chalky who was under attack. And I guess that on one hand, you could say he won because he survived. But he’s also surviving in self-imposed exile on the calming shores of the Chesapeake Bay, away from his family and crippled with the memory of seeing his daughter shot to death in front of him. So you could also easily say he lost. At the very least, Mr. White fought to a draw and on Boardwalk Empire, a draw might be the closest thing to a victory a character can get.

Coach of the Year: Al Capone

Because no one rallies the troops like a coked-up sociopath!