A few days ago, I finished the third season of The Walking Dead. It took a little while, thanks in large part to my Breaking Bad addiction and in small part due to my wife’s refusal to watch the show. But I finished it and last night, started the fourth season.

But first, there are a few things about season three that need to be addressed.

The Easy Question About Season Three

Was the third season better than the second season?

Yes. But that’s not saying much. They left the farm. So right there, that’s a step in the right direction.

The Hard to Answer Question About Season Three

Did the way the third season end make me more or less excited for the fourth season?

I’d say…well…I was most likely going to watch the fourth season regardless of how season three ended. So, not really.

The Softball Question About Season Three

Was I sad when Andrea died?

Would I bummed if a certain character did die?

Also a negative. I have to say, I’m not really a fan of any character on the show and to go a step further, I’m mostly annoyed by them. But if I had to pick one, it’d be Carol. I’d be bummed if Carol died. I like Carol. Although it should be noted that I routinely fast forward through the majority of her scenes.

The Three Characters I Can Tolerate the Most

A Haiku About the Governor

Sunglasses did not survive the zombie apocalypse. Well, unless you’re this guy.

The Form of Government at the End of Season Two

The Form of Government at the End of Season Three

You’re a kid. Pump the breaks, tough guy. Thanks. 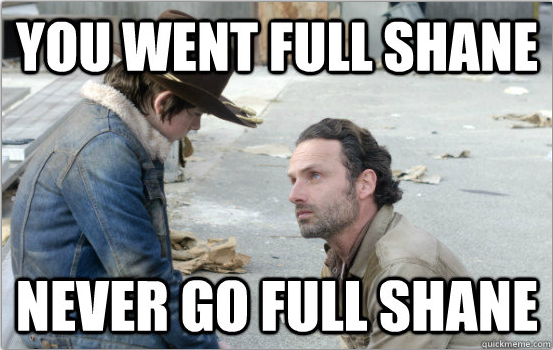 I wouldn’t change a lot about The Walking Dead. Only a few things.

First change: One character should be a cook and specifically, the cook for the group. I’d have to imagine keeping everyone fed would be a tall task. And also, cooks are generally pretty entertaining people.

Third Change: Flashbacks, dude. Let’s see some flash backs! What was Carol doing when the zombies started showing up everywhere? And Daryl? And Cutty from The Wire. One of the main issues I have (and I can’t imagine I’m alone) is the dead time in the story. Each episode, each season has had them. It’s why Rick tells everyone that they’re going to war, then spends three episodes preparing for it. The Walking Dead has too much time, not enough story. An easy fix for this is flashbacks.

Fourth Change: Bring in some stronger actors or write the role players better. Either way, The Walking Dead needs a deeper bench.

One Prediction for Season Four

Rick and Michonne hook up and it’s weird.

Like Loading...
‹ The Best Television Shows Since 1990ish
Kick Out the Jams: The Red Hot Chili Peppers Edition ›