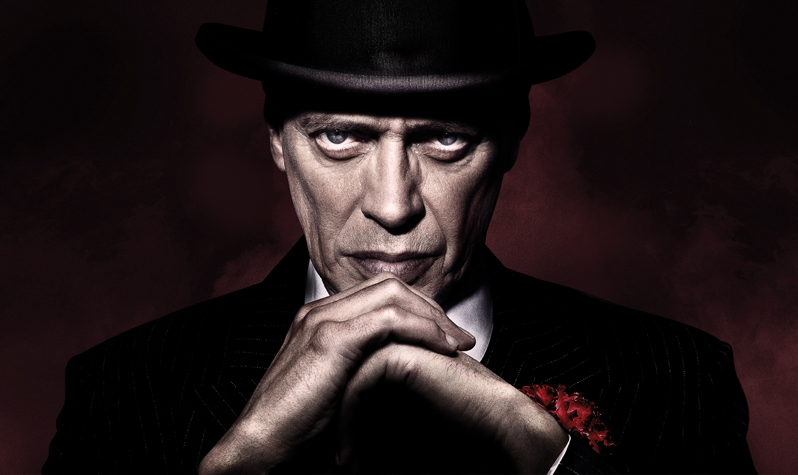 You play a dangerous game when you’re a Sunday night television show and you decide to simmer things down a bit, put a cabash on the heavy-hitting and devote an hour to laying narrative building blocks. You’re banking on being so interesting, that tuckered out eyes from a weekend of funtivities will push the sleepys aside and stick with you, even when you’re not at your most compelling.

This is the game Boardwalk Empire seems to play for the majority of their seasons. They kick ’em off with a bang, but then spend the next handful of episodes slowly and meticulously telling their story. Things then start to ramp up for the home stretch and for all of the criticisms leveled against the show, farting out endings can’t be one of them. Boardwalk Empire knows how to make an entrance and knows how to dip in style. It’s the in between that can get a bit murky.

So it’s with that in mind that patience was needed to both get through and enjoy this week’s episode, “Resignation.” It was a good episode, but after the fireworks of last week’s premiere, it definitely seemed a little slow. I mean come on, only one dead body? What is this? Breaking Bad.

But before I go any further and get into this week’s power rankings, I wanted to bring something up that my darling wife touched upon after watching “Resignation.”

Boardwalk Empire can get confusing. Motives are murky, dialogue is glossed up, slang is kicked around. It can be sometimes a tad bit prickly to follow. At first glance, you’d think it was similar to Game of Thrones in that respect. I mean, both are large scale, massively casted, sprawling period pieces. But there is one difference between the two and it’s that one difference that makes Game of Thrones, a show set in a fantasy world complete with made up words and languages, easier to follow than Boardwalk Empire.

It all comes down to motivation.

Everyone in Game of Thrones has a clear motivation- power. They want to be king. All of them. Even the ones that don’t want to be king, want someone else to be king and their motivations are tied to that. If you were to look at a complex television show like Thrones, Boardwalk or any of the great ones kicking around like a song, the motivations of it’s characters would be the groove- the thing that everything builds off of. So with Game of Thrones, it’s easy to follow because it has that definitive groove in place. On Boardwalk Empire, everyone has different motivations. The jumping off point isn’t as clear; that groove isn’t in place. You could make an argument that like Game of Thrones, the motivations of it’s characters are similar- they all want power. But it’s not as simple. Look at Nucky. You never know what he’s up to and that sometimes even includes after he’s done whatever it is he might have been up to. What is Richard’s motivation right now? What about Gillian and what about Chalky? The motivations of the majority of Boardwalk’s characters aren’t as clear as those in Game of Thrones and I think that’s one of the major knocks against it.

With that out of the way, let’s look at this week’s power rankings.

1. The One About Al Capone and the Cicero Follies

In Boardwalk Empire‘s first three seasons, Al Capone drifted in and out of the show. He played into Jimmy Darmody’s story line and came into play last season as Nucky was rallying the troops, but for the most part, he’s been a bench player. A bench player. If you’re a television show set in the 1920’s and Al Capone is a bench player then you either have to be really good and loaded with talent or spread way too thin. Personally I think Boardwalk lies somewhere in between. There are a lot of characters on the show, but not only is this Al Capone we’re talking about, but Al Capone played amazingly by Stephen Graham. That little dude eats up the screen. I can’t take my eyes off of him. Add to the mix his ying and yang brothers and I’m all in on the Capone story line.

So it’s been reassuring that so far this season, Capone’s chunk of the Boardwalk pie has been a big one and received a good amount of attention. I’m not well-versed enough in Capone history to know exactly what he’s doing in Cicero or even where the hell Cicero is, but all I know is that Boardwalk has my undivided attention when he’s involved. I have no idea how it’ll tie into what’s going on in Atlantic City, but it’s cool, because I’m not even sure if Boardwalk Empire is a show just about Atlantic City anymore. It seems like it’s flirting with the idea of being about Prohibition, gangsters and the 20’s en mass. And I’m cool with that. Totally cool.

Especially if it means we keep getting more Capone.

2. The One About Richard Harrow’s Mid-Western (And Occasionally Murderous) Odyssey

I don’t want to sound cruel or anything, but personally, a Richard Harrow not interested in killing fools anymore is potentially a Richard Harrow I’m not interested in. That’s life. That’s a hard truth. If I wanted to follow along with someone getting back to his roots in a totally peaceful way, I’d watch something else. Probably something on the Discovery Channel. Although it should be noted that the Discovery Channel is a ruthless liar sometimes. Giant sharks? Mermaids? Please. You sleep on a bed of lies, Discovery Channel.

But back to our friend, Richard…did you know that tin masks were something actually used in the early 1920’s to help WWI veterans with blown off faces look slightly more normal? It’s true. Also true, you never kill a dog on screen. So I appreciate that Boardwalk adhered to this unwritten rule.

But no really, back to our friend Richard…

3. The One About Chalky White & the Perils of Restaurant Management

Michael K. Williams is the dude who plays Chalky White. Is there any question as to whether or not his death stare is a top 5 all-time death stare?

But this seems to be about the arrival of the smooth-talking Dr. Valentin Narcisse, played by Jeffrey Wright. I don’t trust him farther than I could throw him. I assume he’s going to be around all season, but I feel it’s too early to assume that he’s this season’s Gyp Rossetti. Will he even be a bad guy or another Rothstein- a power broker on the fringes of Boardwalk? Either way, he’s most definitely going to bring the best & worst out of Chalky and I’m firmly in the camp of More Chalky = a better Boardwalk Empire.

Oh and Mr. Dunn Pursley, you kind of need to know your role, homey. No need getting all pissy about a mess you created. You’re totally going to be dead by episode six. Seven if you’re lucky.

4. The One About Nucky Thompson and You Know, Whatever That Entails This Week

Gosh, one of your employees takes a bullet while working for you, puts his life in danger and knows more about your criminal enterprise than almost anyone else and he has the balls to ask for a raise…or at the very least, respect. Talk about ungrateful. These kids have no work ethic these days. Probably because Eddie spends all of his time watching the MTV and tweeting on his Twitter. You got balls, Eddie. Balls.

Sidenote: the fact that Nucky’s plot line is 4 speaks volumes to me about the main problem with Boardwalk Empire (besides the one mentioned earlier about it being a tad bit too convoluted and complicated.) The show’s main character is kind of boring. The casting of Steve Buscemi as Nucky is going to dog Boardwalk for it’s entire run and will probably end up being it’s fatal flaw. Sure, they would have gotten some flack if they had cast James Gandolfini in the role because then Boardwalk would have just been considered The Sopranos, 1920’s edition, but it would have made for a better show and in the long run, the criticism would have subsided because it would have produced a more interesting show.

5. The One About That Shady Agent Knox

History has essentially only taught us three things.

It’s taught us that if we don’t learn from it we’re doomed to repeat it. It’s also taught us that promises and statements made during a campaign will come back to bite you if you’re elected (see: red line, Obama.) And the third thing history has taught us? It’s that J. Edgar Hoover was kind of a douche rocket. Well-intended, sure. But also kind of a knob job.

And now that historical wet blanket has come to Boardwalk Empire. Nucky’s going to be thrilled.

6. The One About The Artist Formerly Known as Agent Van Alden

Van Alden, you may have your share of problems and struggles but buddy, your wife is adorable.

7. The One About Eli’s Son Possibly Becoming the Next Jimmy

Homeboy was at school this week, smoking cigarettes and eating cheesesteaks

8. The One About Gillian Losing Her Way

You can’t expect a character smacking heroin to be available each week. That’s just unreasonable.

See you next week.