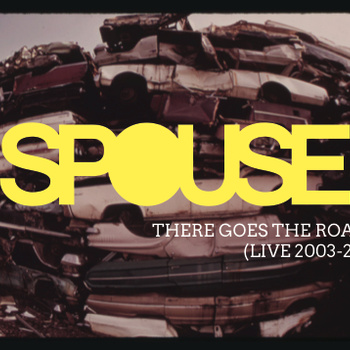 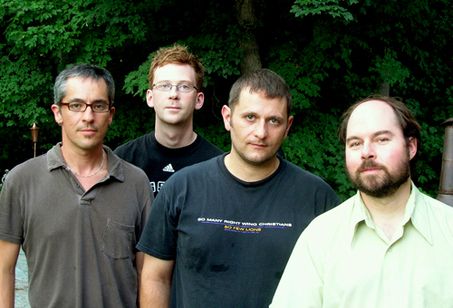 Rain on a Monday morning should be banned by law. Flat out. The fact that it is still allowed to happen is an outrage. An outrage!

So yes, here on the East Coast this morning, it’s raining. Sprinkles and showers, but annoying and disheartening none the less. The memories of delightful late summer weather this weekend are still fresh, but fleeting. This could be a downright perilous situation.

To combat such dire straits?

Might I suggest There Goes the Road…(Live 2003-2010), the new live album by the great Maine/Massachusetts band, Spouse.

Some General Spouse Back Story…

Spouse was more of a revolving collective of musicians orbiting Jose Ayerve than it was a band. Ayerve formed Spouse back in the mid-nineties and over the course of fifteen years, Spouse released eight albums, the last being the superb Confidence. The sound of Spouse was enchanting, raw, independent, melodic and lively. It was a call back to bands like the Replacements and Pavement, as well as a band like Wilco. Ayerve has a voice that would never be considered perfect from a classical standpoint but would most definitely be deemed perfect from a rock purist’s point of view. In 2011, Ayerve pulled the plug on his long-running musical experiment and moving on to his new project, A Severe Joy.

Some Personal Spouse Back Story…

I was introduced to Spouse when my cousin, JJ O’Connell, started playing drums for them in the early 2000’s. I’d go up to Bowdoin College to see them play and I’d badger them for opening slots when I had a band of my own. I saw them as a three-piece, a four-piece and a more than that-piece. My favorite lineup was the three-piece, though. They created a tornado of energy on stage and epitomized what a great trio was meant to be- each member doing their part and helping shoulder the load. Spouse was fun, entertaining and enthusiastically explosive. I loved ’em.

So naturally, when Ayerve announced the dissolving of Spouse, I was bummed. I understood, though. Homeboy had been at it for fifteen years. I feel every band comes to that point where you either keep on keeping on or walk away. It was his time to walk away. A man can only endure so many multi-week trips in his Jeep for so long. Understanding is a way to dull the pain of loss, but it’s short-lived. Eventually you’re going to move on and just flat out miss what no longer exists.

And then came this live album…

Good ol’ cousin JJ had been doing some digging and a couple weeks ago, announced that he had curated a Spouse live album. The album consists of joyful nuggets from his time with the band (2003 until the end.) For those that loved the band, it’s a friendly reminder of what made them great, especially live. If you’re unfamiliar with the band, it’s a dandy introduction to Spouse.

Either way, though, and regardless of your Spouse standing, it’s a damn fun album.

The album (which you can listen to HERE) touches on almost every phase of Spouse’s run, with old tunes like “Joker” and new tunes like “Keep Being You” and “No Sudden Moves.” It also features a wonderful acoustic version of “Are You Gonna Kiss or Wave Goodbye?,” one of my favorite Spouse tunes. Other highlights are “Long Live the Baystate,” “Catch 22,” Over the Rabbit Hole” and “Army Song.”

So, on a dreary Monday, for your consideration, I strongly suggest you give Spouse’s There Goes a Road a listen.